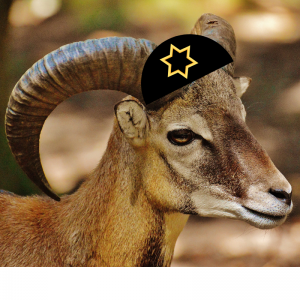 This shiur was inspired by Rabbi Yehoshua Lewis, founder of Olami affiliate Mesorah NJ, by his series of classes on Jewish myths and is the fourth in our series of Myths in Judaism. Rabbi Jeremy Kagan provided important direction in its development. Rabbi Yisrael Isser Zvi Herczeg kindly reviewed and edited the shiur.

The catalyst for this class is a popular misconception – asked by many university students to their campus rabbis – do Jews have horns? After we discuss the misunderstanding behind the myth, we explore the true perspective on how it originated – with the radiance of Moshe Rabbeinu upon descending from Mount Sinai with the Second Set of Tablets. This shiur explores the phenomenal, unparalleled spiritual growth and development achieved by Moshe Rabbeinu and the ramifications for own capabilities.

Rabbi Mordechai Becher related that his friend and mentor, Rabbi Dovid Refson, the Dean of Neve Yerushalayim once attended a conference on Science and Religion. The first speaker was an astrophysicist who began, “I don’t know much about religion, but my feeling is that it is basically reciprocal ethics.” He then proceeded to present his understanding of the interplay of religion, Judaism and science. Rabbi Refson, the next speaker, gets up and begins, “I don’t know much about astronomy, but I think it can be summarized by, ‘Twinkle Twinkle Little Star.’” After the presentation, the astrophysicist was noticeably upset. Rabbi Refson responded that the astrophysicist had done the same thing, thereby minimizing the significance and depth of Judaism.

In this shiur, to avoid simplification when clarifying the myth of Jews bearing horns, we will uncover profound ideas about the essence of Judaism, the nature of G-d and the human capacity for astonishing spiritual growth. The question will no longer be, “Do Jews Have Horns?” but rather, “Could They?”

How Did this Myth Begin?

Among the top myths held by those unfamiliar with Judaism is that Jews have horns. In fact, it’s not uncommon to hear stories of people previously unacquainted with Jews who scrutinized them to catch a glimpse of their horns. How could such a wild myth have ever arisen?

2 Responses to “New Shiur: Do Jews Have Horns? Karan Or Panav”