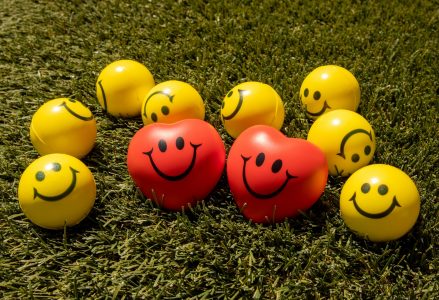 “A fake smile may fool the crowd but it never eases the pain.”

“Turn that frown upside down!”

“You’d look prettier if you smiled.”

These phrases, and their variations, are often said by parents, and other adults of hierarchy, to children.

Communication can be done via many different methods. One way is through facial expressions. When an adult tells someone that they better stop looking sad and start looking happy, the adult is telling them that they need to stop communicating their feelings of sadness.

There are two things we can do when there is a problem, one can try to fix it, or one can pretend that it doesn’t exist. Telling someone that they need to smile is a shorthand way of telling them that their feelings are making you uncomfortable, and you would like them to stop communicating their feelings to you.

A true friend, a real caring person would try to figure out why the person in question isn’t smiling, not request that the problem be concealed. People of all ages have feelings and concerns. Often, they just need someone to speak with, someone who can just listen and “hear them out” By squashing the means of communication, you’ve deprived them of that so desperately required by them. Worse yet, you’ve also insisted that they broadcast to the world that all is ok with them (since they’re now faking a smile).

Forcing a smile isn’t the only way that people who need to express themselves get shot down.

Sometimes they get shot down because they’re:

being accused of negativity,

bringing up the past (what’s the point, move on) or

speaking “ill of the dead.”

However colorfully it gets phrased, it boils down to the same thing, figuratively duct taping the mouth because the listener is bothered by the topic that is about to be discussed. The role of a friend is to be there for their buddy.

The job of a parent is to listen to their child.

What children hear from their friends and from the news naturally will make them curious.

It will often confuse them.

They will likely have questions.

Sometimes they will actually ask a question in question format. On other occasions, they will make a statement in the hope that it will elicit a response and become the start of a dialogue.

However they approach the situation, the issue is clear. They’re reaching out asking for you to communicate with them about what it is that is bothering them.

And that presents you with two options, discuss or don’t discuss.  If what they’re telling you is making you uncomfortable, try to find them someone helpful whom they can speak with. Acknowledge their concern, and express that while you aren’t capable of having this conversation, you’ll connect them with someone who can and will. That’s the correct course when you cannot fill the required role.

But by telling them to be quiet, and worse, by telling them that they have no right to speak (be it due to negativity, being “in the past” or speaking “ill of the dead”) you’ve done a double crime. Not only have you told them that you’re incapable of being a listener for them, but you’ve taken away their permission to even speak to anyone about this topic that is of concern to them.

Recently I was listening to eulogies of someone who died way too young, and a speaker said something that burned me inside: “We tell people that smiling never killed anyone, but his smile killed him,” meaning that he pretended that all was ok when it obviously wasn’t.

Words cannot properly convey how wrong that is.

______________________
Yisroel Picker is a social worker living in Jerusalem. He has a private practice specializing in working with people of all ages helping them understand their own thought processes, enabling them to improve their level of functioning, awareness, social skills and more.

To speak with Yisroel about presenting at a child safety event or to discuss a personal case, email him at yisroel@ympicker.com