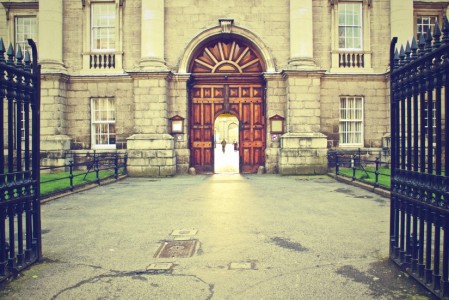 The Door That Became a Homepage

First, why is it a good question? The core reason is that today’s Jews are devoted to reaching, are vastly different than those who populated the Jewish world in what many look back on as the good old hey days of Kiruv; the days when young Jews were thirstily seeking truth and spirituality, when it was a virtual given that Jews were proud supporters of Israel, when a huge proportion of Jews had at least some familiarity with basic touchstones of Jewish life, and the days when the vast majority of Jewish parents feared nothing more than their child intermarrying. All of that, and much more, has been flipped on it’s head.

The seekers of truth and meaning are few and far between, young Jews are far more likely to feel at best defensive, and at worst ashamed of Israel, most Jews know literally nothing about Judaism, and with almost three of every four Jews marrying non-Jews, not only is intermarriage a non-issue, most Jews consider being against intermarriage to being morally on par with southern segregationists of the sixties. And all that is just for starters.

So yes, it seems that the target audience that gave rise to the 150-200,000 baalei teshuva just doesn’t exist anymore. The once deep pool of identifiable and reachable Jews has been reduced by assimilation, intermarriage, and social mobility to scattered pockets of Jews who frequently aren’t Jewish at all, and certainly have no room on their smart phones for a Judaism app, let alone time in their schedule to attend a class or a Shabbaton.

So what are we to do?

Without a doubt, our strategies and methodologies need to change, in some ways radically, to address the new and evolving landscape. I can tell you that the world of Kiruv is very hard at work innovating new ways to reach, engage and inspire Jews in the context of a new reality. And, we are seeing success. It is not my intention in this article, however, to tout the current achievements of Kiruv. This is because, as I said, the whole question about the current “state” of Kiruv, and speculation about whether or not our best days are behind us misses a much more important and fundamental point.

Emunah: Always Believing in the Door

As Jews who believe in the eternity of Torah and the nitzchius of Klal Yisroel, the question of whether or not our fellow Jews are still reachable should have no more relevance than did the viability of Kollelim being successful on the barren shores of America to R. Ahron Kotler.

Consider the words of the Sforno: In Braishis 35: 11-12, Yaacov is told that he will no longer be called Yaacov but rather Yisroel, that he should be fruitful and multiply, and that his descendants would be kings. The Sforno says that Hashem was telling Yaacov that he should have no fear that his descendants would be lost among the nations, and that even if in the course of history they became unfit to bear the illustrious mantle of Yisroel, that nonetheless we should never stop making every effort to insure the Jewish future. Why? Because ultimately Klal Yisroel is in Hashem’s “hands,” not ours. Even when the door seems to be closed—even under seemingly hopeless conditions—Hashem Himself will rectify the situation and there will emerge Jews worthy of Jewish royalty. So the question is not whether the door is closing, because one way or another, with us or without us, Hashem will make sure that never happens. The only question is will we give up and forfeit our opportunity to be a part of Hashem’s success.

To me it is clear that what Hashem was telling Yaacov is a truth that we have all come to understand, accept and live by as second nature: No matter how things appear on the surface of Jewish life and history, there is always a deeper dimension where Hashem is working to ensure not only the survival of Klal Yisroel, but a vibrant and healthy Klal when all the trends seem to be pointing in exactly the opposite direction. Isn’t this, after all, the essence of the next two yom tovim that we will celebrate?

Chanukah and Purim, the holidays that are specifically about surviving the long, dark night of Galus, highlight the reality that no matter how tightly the door seems to have shut on Klal Yisroel, just beneath the surface, there is a completely different story unfolding.

This is what emunah is all about. It’s about believing, but not just believing, living and acting not based on the facts-on-the-ground that are clear and open for everyone to see and assess, but rather on the deeper, underlying reality that is the ultimate stage of Jewish history; past, present and future.

The Optimism of Yeridas Hadoros

In Talelei Chayim, Rav Chaim Hakohen Fatchia, known as the Chelban, addresses the tension between what Chazal call yeridas hadoros, the inexorable spiritual decline of Klal Yisroel, and the Zohar teaching that with each passing generation Klal Yisroel becomes more and more refined as is draws closer and closer to the impending geula. The Chelban teaches that both principles are true. B’chitzonius, on the surface, it appears that we are moving further and further away from who and what we are supposed to be. However, b’pnimius, beneath the surface, Hashem is working to open the doors in every Jewish heart. The challenge for us today, is the same as it has always been, to not be confused and distracted by the closing door of chitzonius, and to keep our “eyes” on the ever-present potential of the widening door of pnimius.

The Chelban, when he analyzes our times, says that we are being called to two great tasks: Achdus, the familial unity of Klal Yisroel, and kiruv rechokim, the effort to reach those Jews who, despite how things might appear on the surface, are in fact the bearers of exalted neshamos that are primed and waiting to taste the beauty of Torah.

May we be zoche to partner with Hashem, to restore, heal and rebuild every facet of the family of Klal Yisroel, and may the door that opens in front of us be the front door to our family Bayis, Beit Kadsheinu v’tifarteinu, bimheira b’yameinu.

This years AJOP convention DARKNESS BEFORE THE DAWN, will take place on January 18-19 in Baltimore.  In the words of Rabbi Lowenbraun, “The convention will focus rising to the many challenge presented by the new realities in the Jewish world. The convention is open to professionals, laymen and anyone who wants to join us in the battle for the future of Klal Yisroel.”