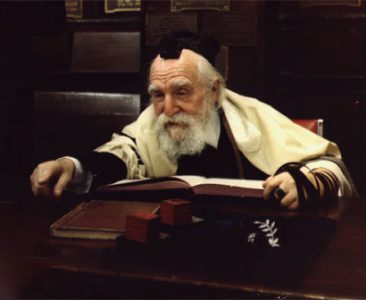 On Rosh HaShanah we saw the big picture. We affirmed that God created and guides the universe. We coronated God as King of the world amidst resounding shofar blasts. We identified with both the great deeds of the avot (forefathers) and the dedication of the nascent Jewish nation that followed God into the desert to receive the Torah at Mount Sinai. As we are judged for another year of life, health, and prosperity, we reaffirm our commitment to be part of the great chain of the Jewish people. We understand that we are accountable for our mistakes and begin the process of the Ten Days of Teshuvah.

On Yom Kippur, the big picture fades to the background and the individual comes into the limelight. We focus an entire day on the fact that God created each of us with a unique mission to fulfill and the resources with which to do it.

The Talmud states, “Each and every person must declare, ‘The world was created for me’ (Sanhedrin 37a). Rashi explains that this means I am considered as important as the entire world …

“Like the entire world” – This is the one-time life experience of a particular person – there was never a person like him and nor will there ever be a person like him throughout history. I, with my special character strengths, the child of my parents, born at a specific time period, and in a certain environment – certainly there is a unique challenge that is placed upon me. I have a special share in the Torah, and the entire world is waiting for me to actualize that which is incumbent upon me. For my role cannot be exchanged with anyone else in the world!

In Parshas Vayeilech, Rabbi Moshe Feinstein (Derash Moshe, p. 330, ArtScroll translation) teaches a critical lesson for rabbis and educators based on the verses of the transfer of leadership from Moshe Rebeinu to Yehoshua:

Moshe gave this exhortation to be strong and courageous to the people as a whole, and then repeated it to Yehoshua, adding the promise that God would not release or forsake him. From this we see that both teachers and students need strength and courage. A teacher must never despair: Even when he thinks his words are having no effect at all and the students seem to be paying no attention, he must still persist and trust that eventually what he says will be heard. But students also need strength at times: Even though they find it hard to understand what they are being taught, they must persevere and strive to their utmost ability to learn without despair. If they apply themselves to the fullest, they may be confident that in the end they will come to understand and ultimately achieve great success.

A dramatic illustration of this lesson can be applied from an incredible story about Rav Moshe that was shared by Rabbi Eytan Feiner in a shiur to Olami rabbis and educators during the Three Weeks that he had heard from Rabbi Ephraim Shapiro:

One evening many years ago, a group of (around) eighth grade yeshiva students had a sleep-over party and decided they were going to make prank calls. But not to just ordinary people, but to Rosh HaYeshivas and Gedolei Yisroel between 12am – 1am!  One boy, whom we’ll call Zvi, was assigned to call Rabbi Moshe Feinstein at 12:30am and ask a crazy, out of the world question. Now, it was known Rav Moshe would typically go to sleep at 11:00pm and wake up at 4:00am and learn before Shacharis. So on this night, at 12:30am Rebbitzen Feinstein gets a phone call.

The boy says, “Hi, I’d like to speak with Rabbi Feinstein.”

“Well it’s urgent! It’s an emergency, you have to get Rabbi Feinstein on the phone.”

The Rebbitzen goes and wakes up her husband and the Gadol HaDor, the Posek Hador comes to the phone! The boy starts asking a ridiculous question and Rav Moshe waits until the boy finishes and Rav Moshe in his astuteness immediately recognizes what is going on. In his loving, caring, concerned voice says, “Tell me, yeshiva bochur, what’s your name?”

Rav Moshe gets him into a conversation and asks him where he is learning and what he is learning. The boy tells him Baba Metziah.

“OK, Zvi, come let’s have a chavrusah – let’s learn together.”

The boy decides, he’s already on the phone, and the way Rav Moshe was speaking to him, so gently, so soothingly he gets a gemara.

“OK Zvi, lets learn the gemara.” And Zvi starts reading the gemara and Rav Moshe goes through the gemara with him and its already 1:00am, past 1:00am.

Rav Moshe says, “Zvi, do you chop (understand) the gemara?”

“No Rabbi Feinstein, no Rebbe, I don’t chop the gemara. Let’s do it again”

And they learn it again. They learn it three or four times until Rav Moshe is convinced Zvi understands. “Yes Rebbi, I chop the gemara.”

“OK Zvi let’s go to the Rashi.”  Most likely, Rav Moshe didn’t have a gemara in front of him and he goes through the Rashi word by word on the sugiya with this wonderful boy.

“Zvi do you chop the Rashi?”

“OK, let’s do it again.” And they go through the Rashi’s three, four, five times until Rav Moshe is convinced the boy understands clearly.

Rav Moshe says, “OK, Zvi we’re going to do a Tosfos together.”

Zvi replies, “Rebbe, Rav Moshe, I don’t know how to learn a Tosfos.”

“Don’t worry Zvi, I’m going to learn it with you. Take a look at that Tosfos (so-and-so) on the page.” And Rav Moshe proceeds to learn through the Tosfos, line by line, word for word, painstakingly. And again they have to review and review until Rav Moshe is convinced that Zvi understands the Tosfos. By now already it’s 1:30 in the morning.

“OK, I’m going to give you a bomb kasha (question) on the Tosfos. It’s a question that I have and it’s one that the Rishonim and Achronim do not ask. And I want you to repeat it.”

It’s already 2:00 – 2:15 in the morning and the bochur finally has the kasha and Rav Moshe said, “Zvi, I’m so proud of you! I want you to go into shiur tomorrow and you’re going to say over this bomb kasha.”

Zvi is so excited. He finally has something to say in shiur! The next day Zvi goes to yeshiva and for the first time he knows what’s going on in the gemara. His rebbe teaches the class the gemara, and then teaches the Rashi and then he says, “OK bochorim, we’re going to learn a Tosfos now.” The rebbe teaches the Tosfos and Zvi raises his hand.

The rebbe thinks, Zvi? Zvi doesn’t have a kasha, Zvi doesn’t even understand the sugiya (the flow of the gemara).

“Rebbe, I have a kasha on the Tosfos!”

And Zvi proceeds to tell over the kasha that Rav Moshe taught him at 2:00-2:15 in the morning and the rebbe is falling out of his chair and he doesn’t know what to do with himself.

“Zvi that is the most amazing kasha! I looked around (at various commentaries) and didn’t see that anyone asks that question! Where in the world did you get such a bomb kasha?! Unbelievable!”

“What do you mean, I got it from my chavrusah, from Rabbi Moshe Feinstein last night 2:00 in the morning.” By this time, the other bochurim are falling out of their chairs.

“You were learning with Rav Moshe?!”

The Rebbe was falling out of his chair; that experience gave Zvi such inspiration and confidence that it picked up him like never before.  From then onward, he applied himself to his learning and is today a maggid shiur in a yeshiva.

As rabbis and educators worldwide, you have the extraordinary opportunity to change the future of Klal Yisroel. “Be strong and courageous” and BE”H you will be successful.

Click here for the Morasha shiur on Yom Kippur: Actualizing Our Mission in Life.

Wishing everyone a Gemara Chasima Tova!