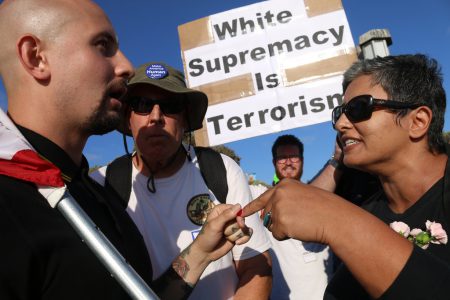 What a summer! Violent protests in Charlottesville and now the terrorism in Barcelona is being displayed across televesion screens and mobile devices around the world. Do these violent scenes contribute to the very real terror the world is experiencing?

Indeed, in 2016, the American Academy of Family Physicians (AAFP) published a position paper of the impact of media on the perpetration of violence:

“Violence occurs at an alarming rate in the United States. Among Americans aged 15 to 34 years, two of the top three causes of death are homicide and suicide. In a given year, more U.S. children will die from gunfire than will die from cancer, pneumonia, influenza, asthma, and HIV/AIDS combined. The rate of firearm-related death or injury in the United States is the highest among industrialized countries, with more than 32,000 deaths each year. In recent years, this has meant that 88 people die each day from firearm-related homicides, suicides, and unintentional deaths. Further, the number of nonfatal injuries due to firearms is more than double the number of deaths. While there are multiple factors that lead to violent actions, a growing body of literature shows a strong association between the perpetration of violence and the exposure to violence through the media.”

I thought to myself, how can people vociferously condemn white supremacist and ISIS terrorism, yet sit back, relax and enjoy the violent media? I recalled an insight from Rabbi Moshe Meiselman, Rosh Yeshiva of Toras Moshe who spoke at Brown University in October 1994 in the aftermath of violence from “both sides” in Israel. Rabbi Meiselman made it clear that he wasn’t condoning or justifying Jewish initiated violence, but he wanted to know why was it that otherwise responsible, ethical individuals commit murder?

He answered (at that time) that we live in an intensely violence-nurtured culture from TV, movies, and video games that in turn creates a disposition towards violence (corroborated by the AAFP study highlighted above 22 years later).

Now, this is not to say there was never violence until Hollywood. Unfortunately throughout world history there is an ongoing historical record of violence and wars, beginning with the children of the first couple, Adam and Chava, when Kayin killed Hevel. How can we gauge the Torah’s approach to violence? Within ten generations of the creation of man, G-d Himself destroyed the world through the flood, save for Noach and his immediate family, due to the ubiquitous violence and corruption of mankind.

The Torah tells us that there was rampant idol worship, murder, and arayos (derived from the Hebrew term ותשחת in Bereishis 6:11 – see Medresh HaCheifetz). Rashi, citing the gemara in Sanhedrin 108a, writes that G-d’s decree to destroy the world was ultimately based on – חמס – brazen stealing, whether people’s possessions, or even other’s wives. The Ramban and Rebeinu Bachaya explain that the decree to destroy the world was sealed on theft alone since it is a forbidden act that is implicitly and logically understandable to everyone.

Torah law holds accountable perpetrators of violence and corruption. In this week’s parshas Shoftim we learn the imperative of establishing a judicial system to enforce Torah laws. Nevertheless, we see great sensitivity in the application of Torah law to the punishment of capital crimes. Although the Torah legislates the death penalty under specific circumstances, the Mishnah at the end of the first perek of Makkos teaches that a beis din that executed once in seven years was considered destructive. Rabbi Eliezer ben Azaryah posits a beis din that applied the death penalty once in seventy years is destructive! Why such a critical condemnation?

Rashi explains (Ein Yaakov Makkos 7a) that a beis din should always search for grounds not to incriminate a defendant. If a beis din executes a defendant once in seven or even seventy years, it reflects that it is either 1) not knowledgeable of the complexities of capital cases or 2) not thoroughly searching to find a legitimate defense for the defendant. Consequently such a beis din is called destructive. The Mishnah in Makkos then quotes Rabbi Tarfon and Rabbi Akiva who maintain that a court should never kill a litigant based on the intricacies and difficulty of properly examining witnesses to result in a guilty verdict.

This is not to say that the Torah looks to freely exonerate capital criminals. The Mishnah in fact concludes with the opinion of Rabbi Shimon ben Gamliel who states that Rabbi Tarfon and Rabbi Akiva’s position would actually result in greater bloodshed since potential murderers would then have no fear of punishment as well as encourage others to transgress (Meiri). We see the care and sensitivity that the Torah takes in ensuring justice is met while trying to avoid the categorization of being “destructive.”

One should mention, however, that the Rambam states in his Perush Hamishnayos that if the incriminating evidence is so clear that makes it impossible to exonerate a defendant, the court is obligated to kill the defendant according to Torah law, even if it requires killing one thousand criminals in one day.

What steps can we take to minimize violence in the world? We can launch a unified campaign to reduce the presentation of violence in the media. Imagine a world where the latest Hollywood blockbusters would feature entire communities engaged in chesed, earn “Academy Awards” and the proceeds would go to assist impoverished citizens, strengthen schools, and fund chesed programs in other communities.

Imagine a world where airports and inner city schools would no longer require security screening. (And as long as we’re on a roll, imagine a world where all people take responsibility to reverse the enormous rate of “accidental deaths” due to medical malpractice and texting while driving.)

On the heels of this past weekend’s spontaneous US protests against bigotry, maybe we’re ripe for a change to uproot violence. As Matisyahu famously sings in “One Day:”

Stop with the violence
Down with the hate…

For the Jew, halachah guides our behavior. Through the Oral Torah in all its written manifestations as we have them today – the Mishnah, Talmud, Rishonim, Acharonim, and contemporary Poskim – the Written Torah is transformed into a practical system for living. In short, it becomes halachah, the Hebrew word for Jewish law derived from the term halach, meaning “to go” or “to walk.”

The halachah teaches us how to go through this world, how to walk the straight path before God. Jewish law guides nearly every aspect of human endeavor and interaction so that we may achieve our essential missions in life – to perfect our character, develop a relationship with God, lead an ethical life, raise productive families, and build a just, meaningful world.

Click here for the Morasha Series on the System of Halachah.