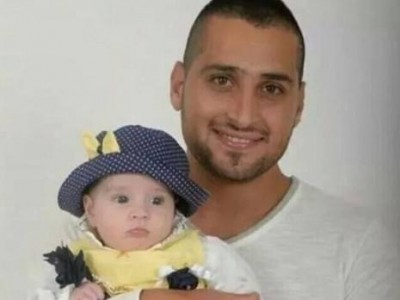 There has been much pain and anguish for all of us over the brutal, cold blooded murder of the four unarmed tzadikim killed last week adorned in their tallis and tefillin while in the middle of davening.  Our hearts are aching and our eyes are still tearful.  However, let us not allow our sincere and worthy tears to dim our vision; the pain must not muddle our clarity of thought and cause us to forget the fact that there is a fifth victim as well.

Although this fifth victim was armed and was a member of the Israeli Police Force and indeed, he was not even Jewish, he is in many ways the true hero of the story.

Who is this fifth victim?

His name is Master Sergeant Zidan Nahad Seif, 30, of Yanuh-Jat in the Galilee. He is a member of The Druze (The Druze are a monotheistic religious and social community. The Druze call themselves Ahl al-Tawhid “the People of Monotheism”. The Druze are Arabic-speaking citizens of Israel, who are drafted into mandatory service in the Israel Defense Forces, in the same process that goes for the majority of citizens in Israel. Members of the community have attained top positions in Israeli politics and public service.Wikipedia)

According to media reports of the incident:

Druze police officer Zidan Seif joined the Israel Police in April 2011 and served as a traffic control inspector at the Jerusalem Police Department. He was one of the first two policemen to arrive at the scene and was shot in the head during a gunfight with the two Palestinian assailants who entered the synagogue and attacked worshippers. He was posthumously promoted to First Sergeant. Despite the doctors’ efforts to save him, the critically wounded police officer succumbed to his wounds.

Druze community leaders and residents of Seif’s village of Yanuh-Jat in the Galilee praised him as a hero. “We are proud of our sons who act fearlessly on the front against terrorist attacks,” said Muefek Tarif, a spiritual leader of the Druze community.

Master Sergeant will be buried in his home village of Yanuh-Jat. He is survived by his wife and infant daughter, parents and five siblings.

National Police Commissioner Inspector General Yochanan Danino eulogized Saif at his funeral on Wednesday, saying that the officer “ran into the heart of the murderous inferno, without fear, without concern” and that he “endangered himself for the security of the citizens of Israel.”

Danino credited Saif for stopping the rampage and for saving the lives of other potential victims.

“The people of Israel owe Zidan a great debt – a great debt to this man and this great officer – to remember his greatness, his character, his heroism and his courage.”

President Reuven Rivlin also attended the funeral, as did Public Security Minister Yitzhak Aharonovitch and leaders from the Druse community of Israel.

Participation in his funeral by Jews was not limited to State officials, as was also reported in the media:

“The funeral was also attended by members of the Haredi community in Jerusalem and beyond who organized buses to take them to the Galilee village to pay their respects to the officer who risked his life and ultimately died to stop the attackTuesday.” (Ibid)

“A haredi woman from Beitar Illit -Ariela Sternbach- took upon herself to organize bus rides from Jerusalem to the Druse town of Kfar Yanouch in the Galilee for the funeral of Zidan Saif…for dozens of haredi residents of the neighborhood and beyond.” (Ibid)

As she properly stated: “This policeman had so much courage. He lives in this country and he was not of the Jewish people but he put his life on the line for us and sacrificed himself for us,” Sternbach told The Jerusalem Post. “He leaves behind a widow and an orphaned child and I think his deeds must be recognized,” she said.” (Ibid)

Ariela Sternbach said it very well, when she stated: “I think his deeds must be recognized.”Hakoras HaTov – recognizing the ‘good’ which others have done for us is a fundamental and paramount principle of our faith.

It has been stated by the greats of our people that without Hakoras HaTov one’s entire service to Hashem is lacking and deficient.

There is no limit to Hakoras HaTov and we as Jews must never forget the goodness and kindness which others, especially non-Jews do for us.  In many ways, Master Sergeant Zidan Nahad Seif is the true hero of the entire tragic incident.  He was not part of an elite anti-terrorist unit who are trained in hand to hand combat and he possessed neither the know-how nor the proper weaponry to neutralize the evil perpetrators who defiled the holy and pristine confines of the Shul.

He was a traffic cop.  He would have been totally within the proper parameters of his job description if upon arriving at the Shul and realizing that there were armed gunmen inside, he would have radioed for the elite SWAT team and remained outside the synagogue maintaining and securing the perimeter of the building  But, Master Sergeant Zidan Nahad Seif did not do that.  He entered the lion’s den and literally ‘took the bullet’ for others as he was shot in the head while simultaneously alerting the elite SWAT anti-terrorists units who were able to respond precisely and effectively.

He did not opt out of helping his fellow citizens by claiming he is just a ‘traffic cop’ and what can he do?

He did not hesitate to enter the building even though he was not Jewish and ethnically and religiously the Druze are Arabs and a ‘break-off’ from Shia Islam and the overwhelming majority of them live in Arab lands. Master Sergeant Zidan Nahad Seif did not make such calculations. He entered the death zone and paid for this heroism with his own life.  We all owe him a debt of gratitude.

If anyone reading this knows of his address or how to contact his family and/or the leaders of his community please forward me this information as I feel all of us should communicate our feelings of appreciation to him.  I also ask if anyone knows of any fund which has been set up to support his family – as he left behind an orphaned baby – please inform me, as I want to personally contribute to this fund.