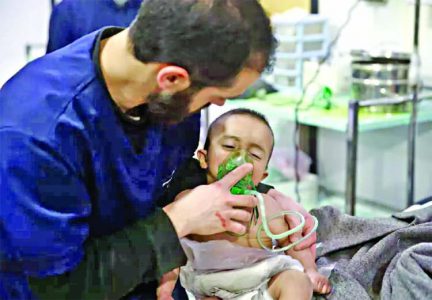 Earlier this week, news agencies around the world reported that President Bashar al-Assad’s Syrian government is suspected of a chemical attack on a rebel-held suburb of Damascus early this week, killing dozens of civilians including women and children.

Rescue workers reported finding over forty people dead in their homes from suffocation. The New York Times said, “The suspected chemical attack on a Syrian rebel stronghold near Damascus on Saturday was the latest in a string of similar deadly assaults, including one in 2013 that killed more than 1,400 and shocked the world’s conscience.”

Does Israel have an obligation to assist Syrian rebel communities threatened by such inhumane attacks? In advance of today’s Yom Shoah, Holocaust Commemoration Day, calls for Israel’s intervention came from the Chief Sefardic Rabbi of Israel, Rabbi Yitzchak Yosef and other voices around the globe.

Olami Resources is proud to present our readership with a brand new shiur that is full of timely resources in the same style of our Thinking Gemara classes.

To that end, we’ve prepared a Teacher’s Guide and a Student handout on Lo Ta’amod al Dam Reyecha, To What Extent Do We Go to Save Lives? – Should Israel Intervene to Avert Syrian Genocide?

Please click on the link above as we are certain that it will enable you to to take your students on a trip through Halacha, and a “beyond-the-headlines” glimpse into how Torah remains relevant and timely in 2018.