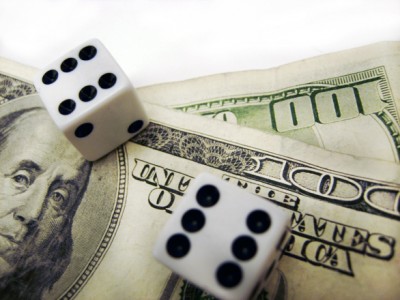 Vadim is extremely confident about his talents as an amateur chess player – but so is Dima. They were both members of the Charkov chess clubs when they were kids, and, now, as American citizens, each usually beats his American-born opponents. Now, for the first time, they are up against each other in New York City’s Washington Square Park. Dima, slightly overconfident, decides to make the game interesting and places $100 down on the table. “How about putting down $100 of your own – winner takes all?”

Salomon Gabai was able to get a low-cost plane ticket to Los Angeles with a three-hour stopover in Las Vegas’s Maccaran Airport. As he walked from one side of the airport to the other, he noticed slot machines in many strategic locations throughout the departures section. His first thought was – maybe I will just try my luck and see if I win…

What would the halachah say about such scenarios? Is it permissible to bet on a chess game?  Can you gamble using slot machines?

The global gambling market is estimated to be worth over $500 billion in 2015. The world is full of thousands of casinos, racing tracks, bingo halls, lotteries, and sports betting pools. And since the late 1990s, with the development of a multi-billion dollar online gambling industry, you do not even have to leave the comfort of your home to engage in this addictive pastime.

What does the halachah (Jewish law) say about all this gambling? And, a Jew must also ask: What do Jewish ethics and morality dictate? Is gambling kosher?

In this NLE Thinking Gemara shiur, Mesachek Bakuvia, some of the questions we address include: