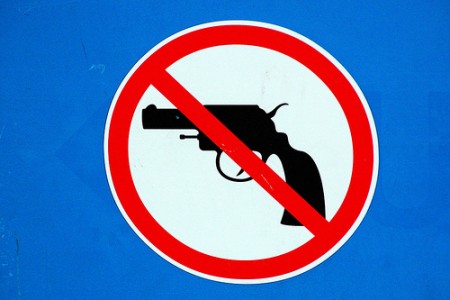 The Torah exhorts us: “Do not put a stumbling block in front of the blind”. (Leviticus 19:14) We may not do anything that facilitates a crime or moral wrongdoing by another.

On Violence and Carrying Arms.

Judaism is not a religion of the other cheek. Let’s be clear. If I am in an old Western gun-fight, walking with my back to my challenger to the spot where we will turn around and shoot it out, then I am mandated to cheat, turn around early, and shoot him in the back. Cheating is bad; but not when it will save my life. The Torah says that if you find a thief tunneling into your house, you can shoot to kill. You can presume that, absent of other indications, the thief will use lethal force if he feels he has to (just ask anyone in Johannesburg or Rio de Janeiro or Mexico City), and you don’t have to wait for him to try and do that.

We are similarly beholden to save someone even by killing (if necessary) the pursuer who endangers his or her life (Deuteronomy 25: 12). We are considered God’s emissaries when we do so[1].

But here’s the rub – if we could have saved him by merely maiming or knocking out the other person and we deliberately failed to do so, we are guilty of murder[2]. There is a thin line between what is outright required and that which is morally reprehensible. One can kill a fetus that is threatening the mother’s life while it still in her womb (even at the point of birth). But the moment it has stuck its head out, this would be considered murder[3]. Life is endlessly complicated and fine distinctions count for a whole lot.

Yes, we can and we must kill in self-defense or defense of the helpless other – but every time we pay a huge price. Having engaged in violence, even though legitimate, we are now in danger of becoming more cruel, of repeating that aggression in a thousand little ways verbally, with our pen, as employers and as travelers on the subway. The Hebrew word to be cruel is achzar. This is a combination of two words: ach – only, exclusively – and zar – to be a stranger. The roots of cruelty lie in our estrangement from the other – the alienation we feel from someone so that we can no longer feel his or her pain. In war, we see the enemy as evil at best, not quite human at worst. Street violence is similarly rooted in an inability of the perpetrator to feel for his victim. But empathy comes by degrees. And it is fickle; cease to nurture it and it will abandon you in a flash.

So here’s what the Torah advocates: be both tough and hard as well as kind and merciful all in one. Is this asking the impossible?

For one thing, we must engage in any aggression with the utmost regret. We will fight our wars and wage our street battles, but I am astonished that the Second Amendment is used to entitle the safest of homes to collect guns in the name of some higher principle that makes some Americans proud. (Like most non-Americans, I am mystified by the existence of the Second Amendment in the first place.)

Beyond that the human being is a complex being. Maimonides pointed out that we are capable of expressing all the contradictory aspects of our being in perfect balance[4]. In fact, we are required to hold contradictory feelings vis-a-vis sinners – we love their goodness and we despise their weaknesses. Must we not have the same attitude towards our own selves?

Uniquely, Judaism mandates how to fight war. Anyone who had the slightest taint in his record must be sent home[5]. He is not ready for the challenges that will put him into a moral-tailspin. No general was entrusted with overseeing these exemptions. Rather, the vice chief-Kohen – a man of impeccable holiness – was entrusted with this job[6]. The Torah forbids so much as the unnecessary destruction of a single tree in the heat of the battle (and this is remarkably the source of all our ethics on wanton destruction of the environment)[7]. Those who carry out justice require a special blessing that they not be tainted with cruelty.

And so we must ask: Do American values mandate a nurturing of mercy and caring and giving? Do they promote mercy without compromising our physical protection at the same time? Does America’s legislation promote that? There is plenty of discussion on what my ownership of guns does to someone else’s security. But, is there any consideration of what gun ownership does to my own moral well-being? Should we not be concerned to promote legislation that supports our own moral growth?

There are certainly some values that come with the current thinking on concealed weapons that contradict the values I am speaking of. Let’s take hunting, an acceptable American sport. This idea is anathema to Judaism, and indeed to secular Jews in Israel and elsewhere[8]. Jewish law allows for the slaughter of animals for purposes of food or clothing. At the same time, it prohibits the slaughter a mother and its child on the same day[9], and it commands us to hasten to unload an animal transporting goods[10]. In fact, the prohibition of cruelty to animals is one of the few commands that Judaism demands of non-Jews as well[11].

Only a human-made constitution could come up with the idea that citizens have a constitutional right to bear arms, (if that is what the Constitution says). Let each country decide what its position on personal gun ownership is. But please don’t turn this into a moral right. Crime and most important, the homicide rate has been dropping in the USA. Take your choice amongst the many arguments as to why this is the case, and support legislation accordingly.

But I actually hesitate questioning the right to bear arms, because it implicates me in presuming that the debate should be framed as to whether and what conditions such a right exists. Two things are wrong with this approach. The first is that it forgets that every right creates a duty. I have a right to my property, and with that right comes the duty to pay taxes and protect others from any hazards that my property might introduce. It is not so easy to tease out the responsibilities a society undertakes when everyone has a right to bear arms. But that is the lesser issue. The more substantive one is that the logic is twisted, from a spiritual point of view. If the American ideal is to be a beacon of outstanding moral virtues, the starting point needs to be, “What are my duties?” not “What are my rights?”

When someone falls in the USA, the first response is often not, “Oh are you alright?” Instead, I hear, “Did you sue them?” Empathy is replaced by grabbing. Special interest groups are all of the rage. Gun control measures get defeated, not because of the will of the nation, but because of political lobbying – the power of the checkbook over the power of the ethical.

In the spiritual world of mankind, there is the possibility to pass on one’s achievements from one generation to the next. Civilization grows because nothing need get lost. Even a generation of spiritual midgets is considered to be sitting on the shoulders of giants.

The Founding Fathers of America were such giants. It is our job not to just try and interpret their words as if they were gods. We ought to take their achievements and build further. Let us not ask “what are our rights?” but “what are our duties?”[12]

4 Maimonides, Laws of the Mind, Chapter 1. Some say that this is similar to Aristotle’s ‘Golden Mean’, though I dispute this fact.

5 Rebbe Yosi in Tractate Sotah, 44a, based on Deuteronomy, 20:3,8. Though Maimonides does not bring this, others such as the Meiri and Sefer HaChinuch Commandment 526 do.

6 Deuteronomy 20:1-4, Sefer HaChinuch, Commandment 526. In the words of Nachmanedes on Deutornomy: And behold the Cohen, who is a servant of God will warn them through his fear of God and will inspire them with trust (that God will save them).

11 It is one of the Seven Noachide Commandments as per Tractate Sanhedrin 56b, Maimonides, Laws of Kings, Chapter 9, Law 1.