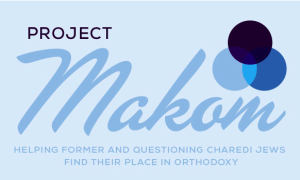 A few weeks ago, I had the opportunity to meet Shulem Deen and spent a few minutes speaking. I had read his book and we had interacted a bit on Facebook. Towards the end of our conversation, I asked him about his thoughts about Project Makom — a new organization set up to help Charedim who were looking for a more open community to find their place. I had read Shulem’s essay about why Charedim who leave observance, don’t check out the Modern Orthodox world before leaving, and I was curious to hear his thoughts. In response, Shulem shared a story with me.

When he was 14 years-old, he spent Shabbos at the house of a Chassidish family. When he woke up Shabbos morning, his host asked him if he’d like some cake and tea. When his host noticed that Shulem had a surprised look on his face, he asked what was the matter. Shulem pointed out that it is assur to eat before davening. His host replied, “I don’t eat before davening, but I thought you might be hungry and thirsty. I worry about your Olam HaZeh, not your Olam HaBa.”

Shulem used this story to explain his concern with what Project Makom was doing. When a person is leaving his or her community, and needs all kinds of help, which might include job training, education, counseling, or the like, you need to worry about their Olam HaZeh, rather than their Olam HaBa. He worried that Project Makom was more concerned with its members’ Olam HaBa than their Olam Hazeh. As I drove home that evening, I spent a lot of time thinking about Shulem’s words, and it was only the next day that I came to a deeper understanding.

This past Shabbos, I took part in the first Project Makom Shabbaton. As one of the speakers I was nervous. Not due to stage fright, or a lack of words (as if that’s ever a problem), but because I was unsure if I could find the right words to connect with the people who would be attending the Shabbaton. Truth is, I was concerned about the whole weekend. Given this opportunity to help our fellow Jews, would we meet with success?

I’m not going to try and sum up the entire weekend, or even what I spoke about (although at the request of some friends, I hope to do a brief write-up about my speech). Instead, I’d like to share some thoughts about what I saw. While the programming was varied, creative, and thoughtful, there were several parts that stood out.

On Friday night, there was a panel discussion where five people spoke of their experience transitioning from the Charedi world to a more modern Orthodoxy. What struck me the most was the honesty of the words that they shared. Nothing was sugar-coated.

There was no effort to promise that things were easy, or that transitions were linear and without pain. When the Shabbaton participants asked tough questions of the panelists, the panelists responded with honesty, rather than trite clichés.

We also heard a schmooze from Rav Moshe Weinbereger at his shul Aish Kodesh. Rav Weinberger’s shul is for people from the Modern Orthodox community who are looking to incorporate Chassidus into their lives.

Here too, I wondered whether the rav would be able to share words that would be meaningful to the Shabbaton participants, some of whom were anxious to move on from the Chassidic world. Once again, I was not disappointed. Rav Weinberger’s words showed that he understood the pain that many people were going through, and that he was not trying to pull the wool over their eyes.

The most important part of the Shabbaton, at least in my eyes, and it is here that I come back to my conversation with Shulem, took part in-between the programming. About 60-70 people, Chassidic and Modern Orthodox sat and talked, and smiled, joked, and reached across the gulf that some people think ought to divide us.

I met some of the bravest people I’ve ever known, those who refuse to accept the status quo of their lives.  They won’t allow the most important aspects of their personal lives to be decided by others. I fought back tears, tears that now begin to fall, as I spoke with a couple who are not on the same page religiously, but are working on things because they are so madly in love with each other.

I met a Chassidish man whose desire to be himself has come at a big cost, but who chose to attend a Shabbaton where he knew nobody. I watched people from different parts of the Charedi world meet others like themselves and discover that they are not freaks, and that even if they have lost the support of some family members and their communities, that they have a new community that understands them and welcomes them with open arms.

So what’s my response to Shulem?

At Project Makom, we are not trying to save anyone’s Olam HaBa. We are fully focused on helping people find a better Olam HaZeh. It’s just that for some people finding a new and better religious existence is part of creating a better Olam Hazeh.

Had Project Makom been on the scene when Shulem was wrestling with his Judaism, he might have charted a different course. The doors are always open.

Rabbi Pesach Sommer is an educator, writer and blogger. He is married and has eight children. You can read his writing at Times of Israel and at his blog here. Follow Rabbi Sommer on Twitter @PesachSommer.