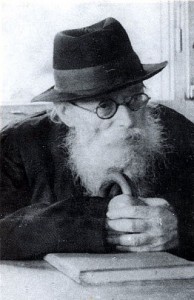 One day the Chazon Ish (Rabbi Avrohom Yeshaya Karelitz, November 7, 1878 – October24, 1953) arrived in a town for a short visit. This occurred when he lived in Lithuania and except for a small group of people in the know, he was for the most part an unknown prodigy. He also dressed extremely modestly and simply, he did not have a nice hat or suit and he was by nature a quiet and unassuming man.

He arrived in the town shul before mincha as he was to meet the town rabbi after maariv. He sat down at the table and seeing that there was another fifteen minutes until mincha would begin, he opened up the Massechta Kiddushin which was already on the table. After about five minutes the gabbai (sexton) of the shul entered and began to arrange the benches and clean up before mincha. He then noticed the Chazon Ish learning from the gemara.

Without any fanfare, he approached the Chazon Ish and removed the gemara from his hands. As he did so he explained, “These gemaras are for the members of a shiur who meet between mincha and maariv and you are not a part of the shiur.” He then placed a Sefer Tehillim in front of the Chazon Ish as he remarked somewhat dismissively, “Anyway, a gemara is not for a person like you, a Tehillim is for a person such as yourself.” With that, the man left the Chazon Ish with the Tehillim and continued to clean up.

After maariv the town rav greeted the Chazon Ish warmly and announced to the fifteen or so men in the shul, “Beruchim HaBaim (welcome) to Rabbi Avrohom Yeshaya Karelitz, a great talmid chochom who is staying with us for the night. He is a great sage from Vilna.” All of the men politely shook hands with the Chazon Ish and continued on their way, that is except for the gabbai. In a very apologetic and submissive style, the gabbai approached the learned rav and stammered, “I am so sorry… I had no idea who you are…. Please forgive me…”

The Chazon Ish looked at the man and with complete sincerity said, “What is there to apologize for? You were correct on all fronts. First, you mentioned to me that the gemaras are for the attendees of the shiur; I am not part of the shiur and therefore you were correct in taking it from me. You then handed me a Tehillim and said, “Tehillim is for a person such as you.” Here too, you were right. I have been negligent in reciting Tehillim and you were on the mark in pointing it out to me. So there is nothing in the world to apologize for.”

The amazing part of the story is not just that it is true; it’s that the Chazon Ish was not being ‘nice’ to the person, he really and truly meant every single word he said to him! Have a nice day, and be nice to someone today and cut them a little slack.