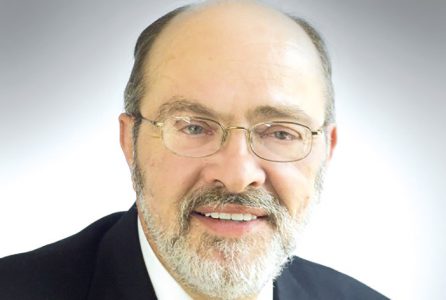 I never met or even ever saw in my life, Mr. Mendy Klein. He was known far and wide as a true baal chessed, a philanthropist of extraordinary proportions, a later in life self-made multi-millionaire and a total and complete mensch. He was scheduled to be one of the honorees at the Agudah dinner a few weeks ago. That was the dinner I went hatless.

I would have loved to have met Mendy Klein, and I would have definitely taken my hat off for him. As one of his closest boyhood friends related to me, “Mendy was not a regular black-hat wearer.” As the dinner was coming closer, I kept thinking about Mendy more and more. The reason I kept thinking about this man I had never met, was the simple fact that anyone to whom I mentioned that I would be attending the dinner, would undoubtedly say something to the effect, “Oh, you’ll be at the dinner; too bad Mendy won’t be there. We lost a great one when we lost Mendy.” Or another person said to me, “I was his best friend when he drove a taxi in New York back in the 70s for 22 hours a day. You know he never slept more than two hours a night! It’s too bad you never met him.” I kept hearing more and more about this man who I had not only never met, I had never heard of before the dinner, and somehow, everyone I met leading up to the dinner was only interested in talking about Mendy.

I was driven to find out more about this uncommon philanthropist of monumental proportions, who was able simultaneously to maintain a straightforward and approachable manner about himself. I called friends of his and found out as much as I could about this giant of chessed. I decided to piece together my own vision of this legendary figure who I regretted never meeting. Everything I relate was heard from friends of Mendy; some of them going back to the 1970’s. Any inaccuracies which may appear are due to my deficiencies and should be understood as my best effort to understand and appreciate a great man who I was never privileged to know.

He was the children of Holocaust survivors who settled after the war in Williamsburg. His parents were members of the fledgling small Satmar Chassidic community. His father, a man who had survived the horrors of the camps and had high expectations for Mendy, nevertheless realized his son possessed unusual and unique qualities. His father would eventually inform Mendy, as Zvi Gluck, (who worked with Mendy very closely) mentioned in one of his eulogies, “My son, G-d blessed you with a brain and cursed you with a mouth, so you won’t be able to keep a job down.”

Perhaps this statement portrays the complexities of the relationship between a Holocaust survivor who had certain expectations of his American born son and his son’s yearning for individuality. Mendy went to cheder and grew up like many young children of immigrant parents. On the one hand, Mendy had a desire to become his own person; on the other side, his father was resolute that Mendy follow in the ways of his chassidishe family. And as many young people have done and continue to do, Mendy struggled during his adolescence over his true identity.

At 16, he made a decision. He informed his father that he was leaving Williamsburg and the insular protective eye of the community. As he packed his things and was preparing for his departure, his father walked over to him. He hugged Mendy with all his love and then stepped back, opened his wallet, and removed an item never before seen in the Klein home — a $100 bill. This was 1967; to give you an idea of how much money that was for a Holocaust survivor who was struggling to makes ends meet: $100 in 1967 equals $749.31 in 2018! One can imagine the look of amazement on Mendy’s face as his father removed the $100 bill from his wallet.

His father looked at his son and said the words that would echo in Mendy’s mind for the rest of his life.

“Mendy, I always kept a hundred dollars in my wallet for unexpected emergencies. Your leaving the house certainly qualifies as one. Please take this hundred dollars and remember, no matter what you do or where you are, how you dress or how you act, I want you to know that I love you unconditionally and my door is always open to you. You will always have a bed here to sleep in and a hot meal to eat. Take this money and keep it with you so if and when the time comes and you want to come back, you will be able to. And never worry, I promise you, the door will always be open to you, whether you are Mendy or Marvin, whether you have peyos or blue jeans, my door will always be open for you.”

Mendy’s father had never attended parenting classes. He had never read a book on modern child psychology. He had never heard of Dr. Spock, only of Dr. Mengele Yimach Shemo. Mendy’s father was a graduate of the school of Ahavas Yisrael that met in Auschwitz, and after completing years of instruction there, he knew that unconditional love of his son was a necessity of life. He pressed the $100 bill into his son’s hand, kissed him on the cheek and silently said a kapitel Tehillim.

The next four years were years of spiritual searching for Mendy. Mendy investigated different lifestyles, but, somehow he kept coming across the unused $100 from his father. After four years of searching, he reclaimed his heritage with all of his vigor and with complete passion. He became a mighty lion as he set for himself the goal to accomplish his life’s mission: to become a person who would make a difference in thousands, if not hundreds of thousands of lives. He never returned to a full Chassidic lifestyle; but, he did return to a total and sincere commitment to Yiddishkeit, to Chessed and especially to tzedakah. Mendy Klein eventually became a businessman, yet his real passion was being a pillar of tzedakah and Chesed of global impact. Countless people, especially young people who are struggling with those issues others preferred to sweep under the rug, owe their physical and spiritual survival to his compassion and generosity.

Over Pesach, a friend of his asked him, “Mendy, If you had to name the one thing that made you who you are today, what would that be?” Mendy thought about the question. He pondered his not-perfectly-behaved-student-childhood. He even recalled some uncertain and tense times with his father, who initially had different aspirations for Mendy. And then, without hesitating, Mendy pulled out the worn and tattered 50-year-old $100 bill. “It was this bill and the knowledge that my father’s door was always open. That is what made me who I am today. My father and I may not have seen eye to eye on every issue as I grew up; however, there was one thing I knew for sure. I knew that his love for me was unconditional. I knew with certainty, even as we sometimes engaged in passionate debates over lifestyles, one thing remained clear in my heart, my father’s love for me was unconditional. That is what made me who I am today.”

Mendy Klein passed away on May 3rd of this year. He never made it to the Agudah dinner, and he left behind masses of grieving people who many never realized how he was their secret benefactor.

I thought of Mendy Klein one more time recently. It was at the conclusion of the wedding of my son Aryeh to his Kallah Tova Akerman. At the end of the festivities, my son Shaya asked me if I had any cash to pay for the babysitters who were hired to watch my grandchildren so that Shaya and his wife Yitti could enjoy the chasunah without constantly worrying about the whereabouts of their children.

I opened my wallet, and I had $100 left which was the exact amount Shaya needed.

As I handed him the money I thought of Mendy Klein and the $100 he received from his father.

This was not the same $100 from 1967. It was also not a $100 given to allow Shaya to come home; he was not leaving home. Nevertheless, I thought of Mendy Klein and his father for as Hashem would plan things, after all of the expenses which were paid that night, this was precisely the last $100 I had in my wallet. Mendy Klein’s father’s gift of $100 symbolized his unconditional love for his child; no matter whatever different outlooks they may have possessed. That same feeling came over me as a parent as I handed Shaya the $100.

Sometimes, I know as a parent, I have made mistakes. There are times I am sure I said the wrong thing at the wrong time to my children. I would not be surprised, after hearing about Mendy Klein, that he too experienced tense moments between his father and himself. Yet, just as the $100 given by Mendy’s father over 50 years ago, represented his unconditional love for his son. So too, I felt that as I was giving my son my last $100, it also was a sign that whatever may come between us, I love him and all my children unconditionally. I may not always say the right thing or make the right choices for them.

The lesson of Mendy Klein’s father was not lost on me as I too hoped my children realize how my love for them is unconditional and everlasting. I never met you Mendy Klein; yet, I thank you.

I have no specific reason to thank you for your tzedakah as I don’t believe I was ever the beneficiary of your largesse. I thank you for your lesson; for reminding me how important it is that no matter what differences may occur between child and father, the knowledge that there is unconditional and unbreakable love between them must always be conveyed and stressed. May Mendy Klein’s chessed and tzedakah be his ultimate legacy.