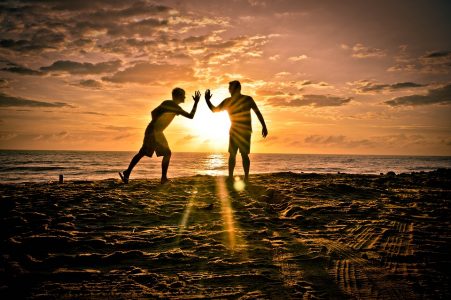 Our society often judges people by the friends they choose. A good friend can help make life more meaningful and worth living, but most people who we call “friends” are actually only acquaintances, not true friends. How does one discern between who is a true friend and who is a mere acquaintance? What type of relationship should true friendship look like? How important is friendship? Does the Jewish view on this topic coincide with or differ from the norms of western society?

True friendship in Judaism, is much more than an acquaintance, and is not mere companionship in Judaism, or a casual relationship, according to some opinions. Based on the Mishna that urges each person to acquire a friend, Rambam-Maimonides, in explaining friendship in general, states that a true friend is someone who is involved in every aspect of that friend’s life, similar to the person who cares for a very expensive item that was purchased. Friends should help one another in every aspect of each other’s lives. And if a person does not yet have such a relationship with an individual, continues Rambam, a human being should continue to seek out associations with other people until he or she has found that one individual worth having this very special relationship called friend.

Yet there are a number Jewish sources which seems to contradict each other with regard to friendship and its precise Jewish definition. For example, one Mishna says that a Jew should give a friend as much respect he or she gives to himself or herself. Yet another Mishna, just two chapters later in the same tractate, says that the respect for a friend should be equal to that of a teacher, quite a different relationship and level or respect. So which is it? How does Judaism specifically define friendship and the relationship between friends? The fact that the Code of Jewish Law rules that legally Jews should greet friends differently, based on the closeness of their relationship, demonstrates that there are indeed many different levels of friendship and different kinds of friends in Judaism.

FRIENDSHIP IS A UNIQUELY HUMAN RELATIONSHIP

The concept of friendship, i.e. a mutual relationship or close attachment, does not exist in any other species on earth, except among human beings. While some species, especially mammals or primates, often assemble in groups or herds, and even though it appears that sometimes two of the species seem to be closely associated, there are no true friendships among animals. The special intimacy of human friendship cannot be found anywhere else. This is proven from a Torah commentary. When the Torah speaks about the responsibility of payment when one ox gore’s the ox of one’s friend, technically the verse can be read either that it is the ox of the human owner’s friend, or that the two oxen are friends. Ibn Ezra cites and mocks the explanation of Ben Zuta, a Karaite, who claims the Torah’s intent was that the two oxen were friends. Ibn Ezra says that this is impossible since animals cannot be friends, only human beings. He adds that the only “friend” that Ben Zuta had was the ox in the verse!

THREE SPECIFIC AND DIFFERENT KINDS OF FRIENDSHIP IN JUDAISM

Based on the view of Aristotle, Maimonides quotes three kinds of friends who a person acquires in life. First, Rambam-Maimonides redefines these in Jewish terms, and then Rabbi Soloveitchik in the twentieth century again explains these types of friends from a contemporary perspective, as we will see below. All three can legitimately be called friends, and some aspects of these relationships are uniquely Jewish.