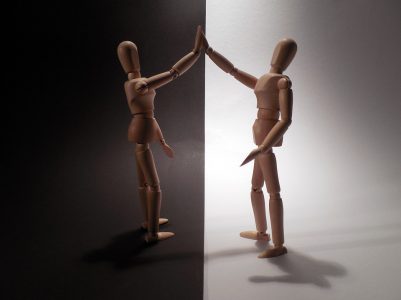 As we go about our daily affairs observing and interacting with our family, friends, acquaintances, and business associates, we are subconsciously (and sometimes consciously) making judgments about others, either negatively or positively. Every interaction is entered into our mental computer. We can become inclined to judge people negatively. However, the Torah requires that we judge almost everyone positively (except someone with a known reputation for being “evil”). The Torah states (Vayikra 19:15), “With righteousness you must judge your fellow.” The gemara (Shavuos 30a) understands that this means we should judge others favorably. A positive attitude toward others can redefine the entire context of our lives and revolutionize all of our personal relationships.

How can we accomplish that? Rabbi Dovid Kronglass, (Sichos Chochmah U’Mussar, Vol. I, p. 82) writes that developing love for others enables one to judge another positively:

“If one truly loves another as a father loves a son, he will very naturally have a positive outlook toward that person. He will see everything that person does in a positive light, and judge him positively. Thus, the mitzvah of judging positively is really an outgrowth of the mitzvah to ‘Love your fellow as yourself.’ The extent to which one judges others positively is a good indicator of his love for others.”

This can be a challenge. Consequently, Rabbi Shlomo Wolbe (Alei Shur, Vol. II, p. 207) writes, that we must search for the good qualities in others. This is the opposite of what people may do naturally, focusing on the negative and ignoring the positive:

“Someone who judges others favorably really hopes that his fellow man is guiltless. He seeks ways of understanding the other’s actions as good. This is the extent to which one must regard another person with a positive attitude, and wish to see his actions as issuing from a good source. We should search out another’s positive qualities. This is the opposite of what most people usually do, which is to immediately notice another person’s shortcomings and ignore his strong points.”

With this in mind, how can Yosef’s brothers have come not only to view him negatively, but even went so far as to decide to kill him! Rashi, Shavuos 30a explains that the mitzvah to judge another favorably does not apply to judging litigants in court. The Shlah writes (Torah Sh’becsav, Tzoan Yosef) that the Shvatim viewed Yosef as attempting to usurp malchus from Yehudah. Therefore the Torah states (Bereishis 37:17) that the brothers went to “Dosan,” meaning they judged Yosef according to Torah law (לדון אותו בדת תורה).  The Shvatim decided Yosef deserved death since he contested Malchus Beis Dovid.

When Yosef ultimately reveals himself to his brothers in parshas Vayigash, “אני יוסף העוד אבי חי, I am Yosef, is my father still alive?,” they are astounded by his presence. In those few words, Yosef justifies his behavior. Rabbi Avraham Edelstein writes:

“According to both opinions, Yosef continues this dramatic moment by immediately explaining to the brothers that his intentions were always for their good and never to exclude them. He consoles his brothers, saying, “Although your intention was to get rid of me, G-d used your action to effect what history needed. I was sent by G-d to prepare for your coming to Egypt, which is what you are now going to have to do.” (“It was not you who sent me down here, but G-d; He has made me father to Pharaoh, master of his entire household, and ruler throughout the entire land of Egypt.”… Yosef does not rely on one speech to reassure his brothers that he bears no grudge and that he sees the whole event as one big act of Providence, for the unity that must now be achieved has to last through future crises as well.”

We therefore learn from the Shvatim, albeit on a greatly different plane, that judging favorably is a real challenge. Rabbi Avrohom Ehrman writes (Journey to Virtue, 2:12) that a powerful tool to help judge others favorably is to use the same self-justifications by which we excuse our shortcomings to excuse the shortcomings of others:

“The Torah tells us to ‘Love others as we love ourselves’ in order to exhort us to go to the same lengths to excuse the actions of others as we would go to overlook our own failings. Do you ever excuse yourself by saying: ‘That’s the way I was brought up. What can I do? All right, so I’m not perfect?’ Next time we jump to condemn someone, put yourself in his place and say, ‘That’s the way he was brought up. What can he do? All right, so he’s not perfect.’ These are not excuses to continue negative behavior. Rather, this way of thinking is meant to help us view another person in a different light, to replace anger with sadness and empathy for someone who does not see that what he is doing is wrong.”

Judging others positively is a building block of society. It replaces negativity and mistrust with positive feelings and confidence in others. And it makes for pleasant company. Countless arguments and ruined personal lives could have been avoided if only people would judge others positively. Think about how you would feel toward others if instead of thinking, “Why is he always so rude and angry to everyone?” you excuse his behavior with, “I feel bad for him, he must be having a really hard time.”