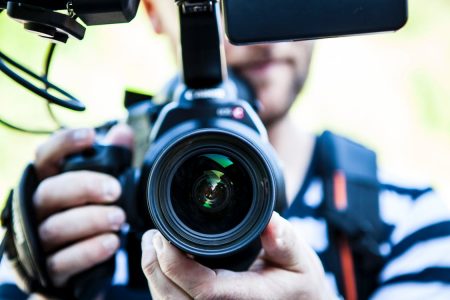 Would you rather read about the effects of clean water or watch a video that shows you its impact on the lives of real people? I know which one I’d pick. Video shows you what’s going on in real time and in vivid detail. It uses images and sound to paint a picture and catapults words into reality. This makes it an exceptional tool for charities and nonprofits that want to raise awareness about their cause.

When we read, our imagination draws on our experience to conjure an image of what’s going on. Video lets you bypass that step. You can use it to forge stronger connections and tackle challenging subjects. But getting started is hard. You know you’ve got a story worth telling…you just aren’t sure how you want to approach it yet. That’s why we put together five of the best charity videos we could find, each with a unique message to share.

Save The Children: What Has Aid Ever Done For Anyone?

What has aid ever done for us!? This video certainly answers the question, riffing on the famous scene from Monty Python’s Life of Brian. A bunch of protesters with giant signs are on their way to stand against aid when someone on the bus asks the question. As the video unfolds, we find out exactly what effect aid has had on the world.

Facts and figures can be a bit dry. By pulling them together into a dramatized sketch and mixing them with a healthy dose of laughter, they come to life. Popular culture is full of scenes that we keep referencing over and over again. Scenes that most of us can identify without ever seeing the movie.

Creating videos that tap into the popular consciousness are effective because they build on common ground. What scenes and stories resonate with your audience? You can use them as a starting point when you tell your story.

Telling a simple story remains one of the best ways to engage an audience and hit those emotional chords. Best Friends Animal Society is a nationwide charity for animals on a mission to “save them all” and they’re not pulling any punches.

This video tells the story of the rescue of Quinton, a five-week old kitten who lost his foot living on the streets. Set to soft music, with text, we’re shown shots of Quinton as he gets his first bath, makes friends and eventually meets his human. And we’re 100% sure that somewhere just out of view, someone was chopping onions…

This is a story that will yank mightily on your heartstrings. That makes it an exceptionally effective way to raise awareness about a charity that saves lives just like Quinton’s.

A video doesn’t have to be masterfully shot or brilliantly produced to work. It just needs heart, a strong story, and a compelling star.

The Seva Foundation: She Can See Her Future

A great video doesn’t have to be long. In under 30 seconds, the Seva Foundation shows the impact of enabling sight – something so many of us take for granted – can have on one person’s life, and the ripple effect on the people around them.

This video shows the direct effect that Seva has, not just on the person they help, but also on the world around them. It shows us the cause and effect. The voiceover complements the animation and delivers a powerful story.

After asking a roomful of journalists how they celebrated World Toilet Day (actually a real day), Matt Damon declares a bathroom strike. He won’t go to the toilet until everyone in the world has access to clean water. In separate videos, various celebrities and YouTubers also joined the strike.

The Water.org team are at a bit of an advantage here because the charity was co-founded by Matt Damon. But that’s not the only reason the video works. The logistics of the strike aside, the video draws attention to a pressing issue, raising awareness and highlighting how people can help make a difference while still going to the bathroom on a regular basis. Yes, humor brings people together.

The video sets up a fictional scenario and uses the banter between the characters to address real issues. Other videos in the series riff on the main video, creating a chain. You can do the same (minus the celebrities)!

The Secret Sauce that Made the Videos Work

Each one of these videos is different. The style of filming, the structure of the script, and the way music was used were all distinct. We specifically chose videos filmed in a diverse style to show that a successful video is about more than one thing.

Every story demands a unique retelling.

Charity Videos Made With Biteable

The best type of video for your charity depends on your branding, your vision, your mission and the audience you’re trying to reach. As the examples we shared showed, startlingly different approaches can be equally effective. Biteable is a great solution for making shareable videos for charity, below we’ve compiled a few of our free templates to get you started.

While this video isn’t specifically for a charity, the presentation style is perfect for sharing key facts. You can use it to highlight statistics relating to your charity, to tell your audience a bit more about the kind of problem you’re trying to solve, and includes a call to action at the end to tell people how they can contribute. You can edit this template here.

A charity video doesn’t have to be too serious. Laughter connects us. We recently released 32 brand new scenes. Some are silly and a little outrageous, but they could be the perfect foil to your message. Who doesn’t love a unicorn?

We hope the videos made you laugh and inspired you to go watch “Life of Brian”…or you know, make a video for your charity!

It’s time to share your story. Why not try one of our free templates and make your first video today?