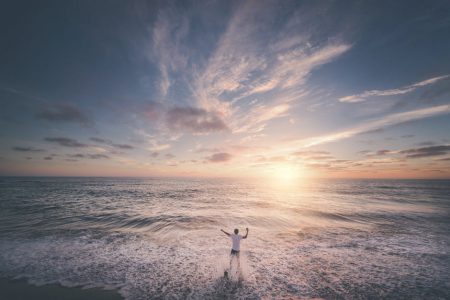 HaRav Yitzhak (Isadore) Twersky’s zt”l (The Talner Rebbi) recent sefer, Torah of the Mind, Torah of the Heart [1], presents the Chasam Sofer’s striking contrast between Chanuch and Avraham Avinu and the implications for every Jew. Rashi (Bereishis 5:24) cites Bereishis Rabba to explain Chanuch’s premature death because he vacillated between righteous and evil behavior, and G-d enabled him to enter the next world with a positive ledger. In contrast, the Chasam Sofer (Pituchei Chosam to Responsa Yoreh Dei’ah) cites the Targum Yonason’s explanation for Chanuch’s early departure from this world: “Chanuch served G-d very faithfully; suddenly he was no longer among the inhabitants of the world, because he was withdrawn, and ascended to Heaven by G-d’s decree.”

Why did G-d suddenly remove Chanuch from this world according to the Targum Yonason? The Chasam Sofer contrasts Avraham Avinu’s and Chanuch’s vision of man’s role in this world. G-d loved Avraham more than the other Avos because he taught people and brought them close to serve Hashem (Bereishis 18:19). This accomplishment upheld him more than his other achievements. Chanuch, in contrast, strived to cling to G-d and became like an angel serving G-d. Avraham’s physicality was not purified to such an extent. Yet, had Avraham Avinu isolated himself from humanity, he too would have joined the company of angels. But Avraham did not follow the course of Chanuch; he reasoned it is man’s responsibility to teach others to strive for righteousness. Otherwise there would be tragic consequences for society like the generation of Chanuch and that of the flood.

Where does Noach fit it? As Rashi tells us, his stature depended on generational context: in his generation of the flood, he is regarded as righteous, but in Avraham’s generation, his stature would have been negligible. Rav Shlomo Klagsbald, Rav of Beis Kenneset Ateret Nof in Yerushalayim explained that Noach followed the directives of Hashem – four times the Torah relates, he did as he was commanded. Nevertheless the Zohar criticizes Noach for not praying for the welfare of his generation. In contrast, we see Avraham petitioned G-d to find merit among Sodom and Amorah, perhaps there are fifty / forty / thirty … righteous people in whose merit we can save the cities.

Did Avraham’s decision to reach out to help others at the cost of reducing his personal spiritual growth mean he was prevented from reaching perfection? Not at all – with the shift in goal from striving to perfect oneself to strive to perfect the world, his mission and modus operandi changed, and with it, the measure to determine his success.

Avraham’s stature is borne out through the Ten Divine Tests. Rabbi Yaakov Kamenetsky queries in Emes L’Yaakov on Pirkei Avos, why isn’t Avraham inviting and serving the three travelers listed among the tests of Avraham Avinu? What elderly one-hundred-year-old in a life-threatening situation after a circumcision, despite oppressive heat, would sit at the door to his tent in search of guests?! And when the guests finally appear, he exerts tremendous effort to serve them a sumptuous meal!

Rabbi Kamenetsky answers that for Avraham Avinu to perform chessed is no test. For the Tanach itself testifies that chessed is the exemplary ingrained attribute of Avraham bequeathed to the Jewish people: תתן אמת ליעקב חסד לאברהם (“Give truth to Yaakov and acts of loving-kindness to Avraham” [Micha 7:20]). Consequently, this episode is not included among the trials of Avraham. In contrast, the other tests challenged his nature, and by passing each of them reflected Avraham had achieved perfection.

Therefore as educators following in the footsteps of Avraham Avinu, knowing there may be limits on our own personal growth by teaching others, how can we ensure we maximize our own personal development?

There are unlimited areas we can work on whether in mitzvos, middos, chessed, and limud Torah. Rabbi Yerachmiel Refael Shaul Miller zt”l offers one game-changing component in his sefer Imrei Shaul addressing the overriding importance of “girsa” in learning Torah. The Gemara in Sanhedrin 13b states that the antidote to forgetfulness is girsa. Rav Miller explains based on the Gemara in Succah 28b-29a there are two mitzvos in Talmud Torah: to learn in depth (Iyun) and to learn through “girsa.” What is girsa? “To read at a pace without effort.” In general, learning in depth requires great effort; to engage in girsa necessitates physical effort, but not mental effort.  And in general, girsa follows a basic understanding of the Gemara after Iyun. The Steipler wrote that the first four times learning a section of Gemara were categorized as Iyun, not girsa. Nevertheless, there are those who learn the Gemara two times in depth and do not have the opportunity for a third time b’iyun. Therefore, for this group, girsa would begin after learning a particular section b’iyun a second time.

Rabbi Miller heard that the Gra and Rabbi Akiva Eiger learned 100 pages of Gemara daily, completing Shas in one month; Rabbi Mordechai Epstein learned fifty daf per day, and Rav Baruch Ber learned 12 blatt per day.   Rabbi Miller writes, “All of this seems so distant to us! However, all of these schedules are girsa. For it’s not possible to learn (b’iyun) twelve pages in one day, all the more so 100 pages in one day.  Therefore all these amounts are girsa.”