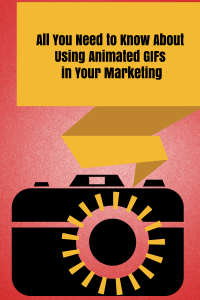 An animated GIF is a series of still image frames coded into a single file. While animated GIFs have been popular online for years, they are now increasingly popular and often go viral across social media and blogs.

Ready to learn how you can use a GIF to get your organization attention and market your programs?

GIFs Are Better Than A Picture

It’s harder and harder to grab someone’s attention. An animated GIF is perfect because it is as a hybrid between a still image and a video. Photographer Jamie Beck put it best when he described an animated GIF as, “a photograph that is still alive.”

Ready to see some examples?

Use An Animated GIF to Announce Something

Do you have a new shiur, class, trip, or rabbi coming to town?

You can use animated GIFs for your announcement.

This is something American Apparel did when announcing its Sheer Nail Lacquer. The company featured an animated GIF of nail polish pictures on its Tumblr blog, accompanied by the caption, “They’re just here for the summer! Introducing American Apparel Sheer Nail Lacquer, our limited-time line of six vibrant-yet-sheer colors, inspired by and named after some of our favorite beaches in Southern California.”

Use Animated GIFs in Your Emails

Nowadays, people get hundreds of emails a day. How can you not only grab their attention but increase your chances of having people come out to your Thursday Night Learning and Chulent Event?

The answer is because they display in email the same way a regular image does and according to an A/B test conducted by BlueFly, emails featuring an animated GIF pulled in 12% more revenue than their non-animated versions.

For an example of this sort of email, check out how Tiffany & Co. used GIFs with its animated email that changes the text it displays. You can read all about implementing animated GIFs in email here.

Use Animated GIFs To Highlight Your Events or to Teach

If you are looking to share with your students, congregants, and donors some highlights from your Purim Seudah or upcoming dinner and don’t have the time or money to put together a fancy video, you can share with them an animated GIF and send it via email or social media.

This format will certainly evoke joyful memories in a more impactful way than one simple still picture. For an example of this idea, I once created an animated GIF from a recent Purim Seudah.

Use Animated GIFs to Teach

Allison Josephs of JewintheCity.com created the animated GIF below and posted it to her Tumblr account.

Through animated GIFs like this one, she can subtly discuss topics such as a Jewish fast day. This sort of format helps springboard the conversation further with Gen Y students.

How I Feel the Moment the Fast is Over

Imagine creating something like this for your upcoming Shabbaton or class?

You’d be certain to generate a lot more excitement than just emailing out a flyer.

Even The White House Uses GIFs!

In advance of the March 31st deadline for enrolling in Obamacare, the White House encouraged young people to sign up for this new form of medical insurance using animated GIFs.

In fact, they posted over twenty animated GIFs on the official White House website (see here) in hopes of catching the eyes of those who they wanted to target and sign up.

There’s no reason why this sort of marketing can’t easily be reproduced to attract people to sign up for your events, dinner, Israel trip, etc.

Ready to easily create your own animated GIFs for FREE?

You Can Easily Create Animated GIFs

First, make sure that you have a series of still images that can come together in a single file to convey the message and tone you want to deliver.

Next, there’s no need to use Photoshop or some complicated tool.

Head on over to sites such as: Make A Gif or Gifninja.

You can also take text and animate it with a tool like TypePop.

Best of all, if you have a Gmail account you don’t even need to go to the above mentioned sites. Simply, click on this link to learn how Google Plus can automatically create animated GIFs!

We hope you bookmark this site and try this new free way to market your programs, trips, and fundraisers. Hatzlacha!