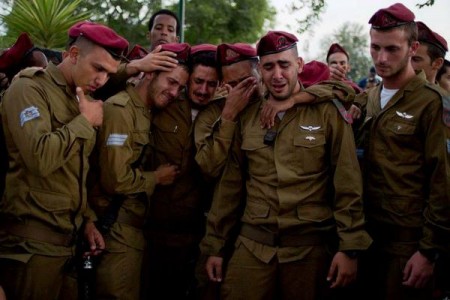 Over the last few days, we have been informed of the loss of 25 Jewish soldiers as Israel continues its ground offensive against the evil Hamas. It is important that we realize that there is indeed evil in this world and that people make choices to be either good or evil. Hamas has chosen to be evil and therefore Israel is correct in attempting to eliminate the evil from this world.

However, today we focus on the 25 young lives that were lost defending and protecting other Jews from rocket attacks. As we write these words, there are 25 families who will never hug their son, husband, father, or brother again. The dreams and the plans these 25 soldiers had for their lives have evaporated instantly as they were killed in the prime of their lives. Of course we know that Hashem is the ultimate Shomer Yisroel (the protector of Israel). However, his human agents are the brave and courageous soldiers of the IDF who loyally and sincerely carry out Hashem’s directives in the Holy Land.

When you go to the doctor and he heals you, although we know that Hashem is the true Ropheh (healer), it is only civil, correct and indeed mandatory to give thanks to the Shaliach (the agent) of Hashem, in this case the doctor, in tandem with thanking the M’Shalaiach (the sender)–-meaning Hashem. So too, while we thank Hashem for protecting His people, let us not forget to thank His messengers–the holy soldiers of His army who are protecting His people. So too, we must feel the pain of the families who have lost their loved ones.

Perhaps we can even in some small way identify with their pain by reducing our unnecessary daily pleasures.

Perhaps we can say one extra chapter of Tehillim today for them. You can decide what and in which way you can empathize with the families of the soldiers. However, just feeling their pain and recognizing their pain, is something which is needed and important.

Is there anyone reading these words who has never walked the streets of Jerusalem?

Is there anyone out there who has never been in Bnei Brak?

The next time you find yourself in Yerushalayim (which hopefully will be soon), and you see an Israeli soldier, go over and tell him, “thank you”. By doing so, you are also thanking Hashem as the Shaliach represents the M’Shalaiach–meaning, the agent represents the corporation and the CEO is Hashem.