There is a place tucked away in the alleyways of the Holy City; its structure is not grand and it has no massive lobby and certainly no parking lot. The building is not impressive and it is not on the list of the ten ‘must see’ places on most people’s itinerary when they come to Israel.

That’s too bad, because it really is a place to visit.

It is a place to daven.

It is a place to learn.

And most importantly, it is a place to learn how to get along with different types of people. The place I am referring to is the shteibel commonly referred to as “Zichron Moshe” or in American yeshivish sprach simply as “ZM.” 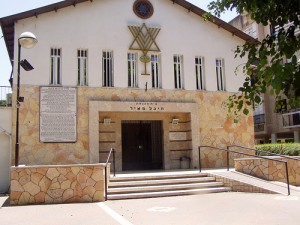 Nowadays Zichron Moshe is a totally Hareidi neighborhood, adjacent to Geula and Meah Shearim. Over the years the shul has become the archetypal modern-day minyan factory. It is literally a place where you have a “minyan on demand.” Whenever you go there, you will hear someone shouting “Mincha” or “Maariv,” and in no time ten Jews will appear and the minyan begins. And as soon as that minyan ends, another person announces “Mincha” and the process repeats itself, going from Mincha to Maariv to Shacharis in a perpetual cycle of just about uninterrupted tefillah.

I imagine that well over one thousand men pass through its halls (I could not say its ‘doors’ for there are no doors to the shul!) on an average day. Indeed, it is without a doubt one of the most frequented shuls in the world. However what is even more amazing than the amount of people who come, are the varieties of people who come. The shul is frequented by all types of Jews, from Hassidim with striped garments to Sefardim from Morocco and Tunis, to Litvaks from the Brisk Yeshiva, to ordinary Jews who want to ‘chap’ a Mincha. Everyone knows that the address to find a minyan whenever you want one is ZM.

Yet, perhaps even more fascinating is the tacit understanding that whoever is the shaliach tzibbur decides the nusach of that tefillah’s davening. On a Rosh Chodesh morning for example, you can have a Sefardi leading Shacharis davening, a Chassid leining the Torah, and a Litvishe Yid leading Mussaf, all at the same minyan, and no one says a word or raises an eyebrow. This unspoken and accepted agreement that no one shall question anyone’s nusach can be confusing at first; however, in reality it is quite an inspirational lesson to learn.

How did this practice evolve and why does it work?

I imagine it evolved as diverse people arrived at shul and whoever led the minyan used their own nusach. The other participants realized that since they wouldn’t want anyone to object when they would lead the davening, they also could not object to someone else’s nusach. And although I recognize that halachically a shul should really have a set nusach, given the circumstances at hand in ZM, this system works for everyone. As I davened there this past week I wondered if we could adopt such a system in our personal lives. Meaning, people in ZM want to daven, they want to live in Shalom with each other and therefore at some point an unwritten and implicit arrangement evolved in which I would tolerate this man’s davening when he was Chazzan and he would tolerate mine.

Perhaps this is a formula for life in general. Sometimes your wife wants to eat milchig and you want fleishig or vice versa. Too often we get stuck on having things our way or no way and that of course results in conflict and machlokes.

Too often husbands and wives, friends and co-workers are insistent on something being done their way and no other way — the only thing this leads to is conflict. As I left ZM on Monday, I realized that sometimes in life I have to let the other person have the right of way; if I don’t, then I would have no claim to ever ask for my right of way. Sometimes it goes your way and sometimes my way, the main thing is that there is Shalom.