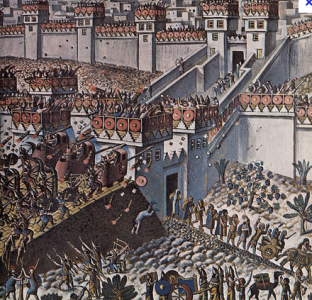 Asara B’Tevet marks the Babylonian siege of Jerusalem that would ultimately result in churban Bayit Rishon (the destruction of the First Temple). It is the first of four fast days in our national calendar that commemorate the Temple’s destruction and/or its aftermath (the other three being 17th Tammuz, Tisha B’Av and Tzom Gedaliah (3rd Elul).

Towards the end of the reign of the righteous King Josiah (Yoshiyahu), the Babylonians emerged as a new world power. At the same time, we find a rising force to the south of Judah, the Twenty-sixth Egyptian Dynasty. Earlier, the Assyrians had formed an alliance with Egypt in the hope of strengthening their position against invading Babylonian armies. In the year 445 BCE, Pharaoh Necho II marched a large Egyptian force through Israel in an attempt to reach Assyria and assist their allies in battle. King Josiah tried to stop him but was killed in the battle.

(The calendar dates used in this article are based on the historical dating system laid down by Seder Olam Rabba, which was authored by Rabbi Yosef ben Chalafta. Many historians are of the opinion that the Second Temple period was roughly 160 years longer than the 420 years presented in the Talmud. In their view, the dates presented here would have to be adjusted accordingly.)

As the Egyptian army returned home, Necho marched his army back through Judah, setting up a puppet King Jehoiakim (Yehoyakim), who displayed loyalty to Egypt. Necho then imposed a heavy tax on Judah, which the Jewish vassal king passed on to the people.

In 442 BCE the Babylonian king Nebuchadnezzar (Nevuchadnezzar) campaigned throughout most of Philistia and Judah, destroying every city in his path. King Jehoiakim surrendered to Babylon the next year, sparing Jerusalem for the time being.

“(He took with him) some of the vessels of the house of God … (and) certain of the children of Israel, and of the royal seed, and of the nobles, youths in whom there was no blemish, but fair to look on, and skillful in all wisdom, and skillful in knowledge, and discerning in thought, and had the ability to stand in the king’s palace.” (Daniel 1:1-4)

These youths would later become some of the most prominent advisors to Babylonian kings and to leaders of Babylonian Jewry. The best known include Daniel, Hananiah, Mishael, and Azariah. This event was labeled Galut Yehoyakim, or the Exile of Jehoiakim.

Seven years later, the Babylonians returned to the area and again marched on Jerusalem. Shortly thereafter, King Jehoiakim died. His eighteen-year-old son Jehoiachin (Yechanya) was raised to the throne in his place. Three months later Jehoiachin wisely surrendered to Nebuchadnezzar, thus temporarily saving Judah from destruction. He was exiled together with members of the royal family, other heads of state, the Judean military, and many artisans. In all, out of an estimated total population of over one million, approximately 10,000 people, exclusive of artisans, were exiled. This event is known as Galut Yechanya.

Though the cream of the Jewish crop was now exiled from Judah, the majority of Jews remained in their homeland following King Jehoiachin’s surrender. Most of these Jews, known as the am ha’aretz, were uneducated and inexperienced in political affairs. They lacked the leadership skills necessary to guide the Jewish people through this next delicate phase in their history.

The last king of the Jewish people before the final exile was Zedekiah (Tzidkiyahu). He began his puppet reign as a Babylonian vassal when he was only 21 years old. Zedekiah was a weak king with limited experience and poor advisors. Zealous princes in Judah together with other national leaders persuaded him to join forces in rebellion against Nebuchadnezzar.

The advisors used two arguments to support their recommendation. They first claimed the Babylonians would not bother with their small uprising. In addition, they argued that even if the Babylonians did indeed march on Judah, the powerful Egyptians would intercede on the Jew’s behalf in order to keep the former out of their immediate region. Neither argument would prove to be correct. By acquiescing to their arguments, Zedekiah acted in open opposition to the prophet Jeremiah’s (Yirmiyahu) advice. The prophet had said that only repentance could save the people from destruction. When his message went unheeded, he realized that destruction was inevitable. He thus counseled submission to Babylon, opposing any talk of revolt.

Zedekiah’s decision to rebel proved catastrophic. Nebuchadnezzar arrived shortly thereafter and laid siege to Jerusalem. For a while it appeared that his gamble would pay off, as the Egyptian army came to the city’s defense and put a temporary end to the barricade. However, once the Egyptian army left, the Babylonians returned on Asara B’Tevet to resume their siege of Jerusalem. It lasted for two years, until all supplies were exhausted in the city. On the 9th day of Tammuz, 423 BCE, the city walls were breached. One month later, on Tisha B’Av, the destruction of the Temple began.

For breaking his oath of allegiance, Zedekiah was forced to witness the death of his sons before he himself was blinded and exiled to Babylon. Other leading officials were likewise put to death. All but the poorest were sent into exile. The kingdom of Judah was thereby terminated.

Rabbi Naphtali Hoff is President of Impactful Coaching & Consulting (www.ImpactfulCoaching.com). He lectures on such topics as leadership, education, parenting, and Jewish history. He can be reached at (212) 470-6139 or at nhoff@impactfulcoaching.com.