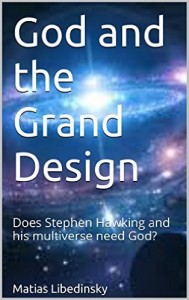 Is it necessary to include God to understand the origin and existence of the universe?

During the last twenty years, there has been a revolution in the philosophical and scientific understanding of cosmology and the argument for Design. God and the Grand Design: Does Stephen Hawking and His Multiverse Need God? explores new creative ideas and scientific discoveries that will challenge and intellectually expand our approach to these essential and highly relevant issues. The book also lays a foundation to better anticipate the upcoming developments in these fields.

Several books have already been written about cosmology such as A Brief History of Time by heavyweight Stephen Hawking.

What are the new discoveries in God and the Grand Design?

What are the new insights?

How does the infinite loop of Creator-Creation stop?

How does evolution figure into all this?

Can evolution be a proof of Design instead of being a proof for atheism?

Exciting new scientific principles are explained in a clear and simple language for everyone to understand.