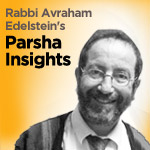 Rabbis, educators, and mekarvim worldwide look to NLEResources.com as an important source of educational materials to assist in their teaching and outreach. As the founder of NLEResources.com, Rabbi Avraham Edelstein has written a comprehensive and growing library of books, articles, and Torah commentaries. The books address essential kiruv topics such as the Oral Law, Proofs of G-d, Torah and Sinai, Women and Judaism, and Torah and Science. Each publication is documented with extensive English and Hebrew footnotes.

The latest series of Rabbi Edelstein’s publications available are the translations of his parsha essays into Russian.

The parsha essays address central themes in the weekly parsha including extensive commentaries of Rishonim, Achronim and contemporary rabbis. Based on Rabbi Edelstein’s parsha commentary in English and Spanish, the Russian parsha essays are an important contribution to the worldwide effort to reach out and educate Russians in the FSU, USA and Israel.