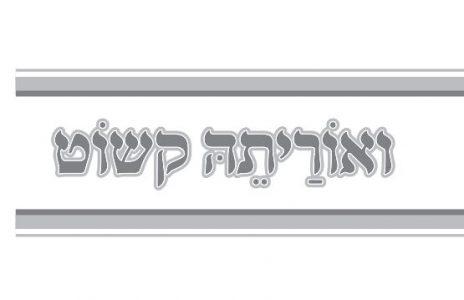 Many in our generation struggle to relate to some basic Torah concepts. Their bewilderment is sincere and their ponderings are legitimate, especially having grown up in a valueless culture, or, one no less problematic, a society of distorted values. What had once been basic, self-understood concepts, have become difficult to grasp. What was regarded as common sense is now commonly considered nonsense.

As a result, because the Torah’s principles are supposed to be appropriate for all times and for every generation, many question the seeming clash between G-d’s eternal Torah and some of modern society’s core values. The answer is that the Torah’s teachings and perspectives do remain everlasting and unchanging. A change, of course, did occur. But that change happened in society, in its thinking, in its declining morals, and in its deplorable “progressive” conduct. The Torah provides a steadfast anchor of sanity in our world, and we must adjust our path to the shine of its light, not the other way around.

The stress and turmoil of hectic modern living combined with recent history’s world turbulence have only added to the spiritual confusion and malaise, doubts, criticism, and complaints about the Torah and its scholars. These conditions are often given as reasons for forsaking and rejecting Torah observance. Some of these concerns may be legitimate; many questions require answers. But one must be able to discern between justified and constructive suggestions and antagonistic, destructive, and self-serving excuses.

A typical illustration is the occasionally heard assertion, “I abandoned Judaism because of the terrible conduct of Orthodox rabbis, some of whom have gone to jail for their activities. If that is what Judaism has to offer, I want nothing of it.” To that ludicrous claim I usually respond,

“Well, that is exactly why I dropped medicine and decided never to see a doctor again.”

“Why not, rabbi?” comes the immediate, quizzical response.

“You see,” I answer, “I recently read horrifying accounts of health professionals who stole millions of dollars from patients and hospitals. I read about doctors who have actively killed elderly patients as requested by relatives who wanted to accelerate their inheritance. I therefore concluded that the medical world is corrupt and that the medical science is a farce.”

“But, rabbi,” my incredulous interlocutor replies, “What does one have to do with the other?”

“About as much as your attempted connection between some rabbis’ conduct and Judaism,” I answer. Our task is to upgrade our knowledge and deepen our perspectives. Otherwise, we may distort the eternal truth, diverting our focus towards convoluted philosophies and warped ideologies.

Torah: Beauty Beyond Belief comes to fill some of the void in this area of Jewish thought. (The Hebrew rendition is titled, ואוריתא קשוט). It seeks to tackle some difficult areas of Jewish ideas and philosophy, some of which may be bothering you, and some of which you may never have even considered. My personal connection with Jewish outreach and education started about 35 years ago, beginning in 1980. Via Machon L’Torah, which started as a small educational program in the basement of our home in Oak Park, MI, I began to meet and learn with students and adults throughout the metropolitan Detroit Jewish community and with college students in universities throughout the state of Michigan. Machon’s programs were quite popular and successful, and, in 1994, we established JAAM (Jewish Awareness AMerica) to intensify our educational activities on the college campus, not only in Michigan but in other states and in Canada as well.

In 2001, Machon L’Torah, in conjunction with JAAM, launched the “Maimonides Jewish Leaders Fellowship” at the University of Michigan. Even after 20 years of educational and outreach activities, we were surprised at the overwhelming response of the U of M students to the Maimonides program. We saw a tremendous thirst for authentic Judaism. Students with no Jewish background of any sort were eager to learn about the beauty of Shabbat, the holiness of Jewish marriage, the depth of Jewish thought and philosophy, and the character traits of respect, thoughtfulness, and kindness to which a Jew is supposed to aspire.

These college students were amazed, upon visiting one of the local day schools for girls, at the students’ behavior in and out of the classroom and that, “Wow, none of their lockers has a lock!” The unprecedented success of the Maimonides program has surpassed all expectations and has now blossomed into over 50 similar programs at undergraduate and graduate schools throughout the United States and Canada.

Due to my intensive, long-term involvement with thousands of college students, I came across many ponderings of thinking students and colleagues. Their often pointed and thoughtful questions gave me reason to delve deeper into our Sages’ wellsprings of insights. As a result I further explored the teachings of our Sages and derived invaluable sparks of wisdom and uncommon dimensions of ideas, which often broadened my own perspective. Some of them I have included in this book. Many others are destined to appear in more books to come, G-d willing.

My hope and prayer is for this book to trigger more interest, more discussion, more understanding, and, most importantly, more love of Hashem, His Torah, and His people.