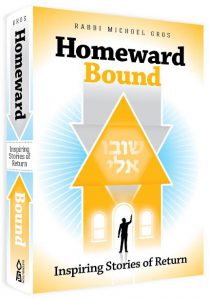 The recently-published book Homeward Bound: Inspiring Stories of Return (Feldheim Distribution) by Rabbi Michoel Gros is a collection of captivating stories and inspiring lessons of Jews returning to their roots and of people involved in kiruv. It contains dozens of true anecdotes of teshuva and kiruv, and it can be an important tool for both mekarevim and their students.

Rabbi Gros has been involved in kiruv in several outlets for many years, including as part of the Atlanta Scholars Kollel, and that experience is reflected in the choice of stories and the presentation of topics in the book. For example several stories stress the imperative of continued growth for ba’alei teshuva, the importance of ba’alei teshuva to engage in serious Torah study and the necessity to internalize one’s teshuva instead of merely changing one’s exteriors. The book also cites examples of how to successfully handle challenging questions such as issues of feminism, and how to discern when the questions come from sincere curiosity instead of confrontation.

The book’s stories reflect the gamut of the teshuva journey, including stories on the beauty and challenges of keeping Shabbos, humorous episodes on the paths of return, the siyata d’shmaya received by ba’alei teshuva and mekarevim, and the strength of students to overcome obstacles during their journeys.

Mekarevim can learn important lessons from the success stories in the book and its portrayals of effective techniques which are used by other kiruv professionals. The book also provides impactful stories they can share with their students to inspire them to grow.

Copies of Homeward Bound are available at a subsidized price for mekarevim and mechanchim for their own use or to distribute to their students. Individual stories or chapters on particular topics are also available. For more details contact: grospublishing@gmail.com

One of the stories from the book, Just One Marble, is featured below:

On New Year’s Eve at the close of 1999 Mira Bergen of Atlanta, Georgia found herself at a crossroads. She had been coming to the local Orthodox community in the Toco Hills neighborhood for Shabbos on and off for over 10 years and loved it. She especially cherished the warmth of the Shabbos table and seeing families spending quality time together. But as much as she was attracted to the lifestyle, she was unable to commit to keeping Shabbos.

However in 1999 as everyone was talking about the New Millennium and Y2K, Mira saw something else. She had always been interested in New Age ideas and pop spirituality. When New Year’s Eve fell on a Friday night, Mira saw the intersection of Shabbos and the new millennium as a sign from G-d that it was time to observe the Sabbath and become Shomer Shabbos. But she found it too intimidating to give herself that title, so she decided to celebrate just one Shabbos at a time. She resolved to make December 31st her first one.

“I saw the new millennium and said OK, time to start being Shabbos observant. But I can’t be Shomer Shabbos. I can’t use that label,” Mira said. So she decided to keep just that one Shabbos. “I’m making a commitment one Shabbos at a time.”

Mira learned the lesson from her mother, who taught her that if you’re trying to cut a roll of salami it can be overwhelming to do it all at once. But if you slice it one bit at a time, it’s much easier to do it.

“Many people think that observing Judaism is an all or nothing action, that you must take on all the obligations at once. But growth in Judaism is really about constant baby steps, about taking on small commitments,” Mira said. “G-d appreciates anything we do to get closer.”

For Mira this meant making one commitment at a time. In every area of her Jewish growth she heeded her mother’s advice and cut off only a small bit at a time.

“If someone is not ready to keep Shabbos each week, why not try to keep it only for an hour? If someone is not ready to keep kosher full time, then try to give up only one particular food,” Mira said. “People think they have to do everything at once. They don’t know that G-d looks highly at everything we do. You’re making a distinction, you’re trying to have a relationship with Hashem.”

So on Friday night, December 31, she was sitting with a local family watching the clock as it struck midnight. It was the first time she had ever spent New Year’s Eve not watching the ball drop in New York on television. But instead of lamenting that she was missing the televised celebrations, Mira felt wonderful as she reflected on the start of the new millennium quietly and in G-d’s way. The frenzied revelry of the secular New Year had been replaced by the spiritual bliss of Shabbos.

That one Shabbos turned into two and within a short time she had kept Shabbos for a month. She kept track of each Shabbos by placing a marble into a wine decanter. By now she has well over 800 marbles.

With each marble she added, the number of that Shabbos also took on a deeper meaning. Each Shabbos she looked for a connection between the week’s number and an idea in the Torah portion of the week or other current event. Every number is significant in Judaism and has a particular meaning, and members of the community began pointing out some of the deeper connections of the number of her marbles.

On Shabbos number 13, her Rabbi taught her about the 13 Attributes of Hashem. Mira’s 40th Shabbos was Rosh Hashanah. The number 40 is deeply related to birth and new beginnings, so it was a perfect timing.

On Mira’s 50th Shabbos the family she was staying with baked a special challah in the shape of the Hebrew letter Nun, which has the numerical value 50. When she traveled to Israel and spent three Shabboses there, she added three unique items to her collection: a small blue chamsah “hand,” a blue glass circle and a blue fish. For her 100th Shabbos she put a battery into the jar because “Shabbos keeps me going!” People in the community have bought other special marbles for various Shabboses, such as the handmade marbles a friend recently brought her from China.

Mira originally collected marbles as a way to make herself accountable and maintain her Shabbos observance, but soon she began looking forward to each Shabbos and especially to putting another marble into the decanter. With each new marble, Mira gained a deeper level of appreciation for Shabbos.

“A lot of people don’t understand. They think that I live the most rigid life, full of shoulds and have to’s, that I have to do this and this. However my life is filled with such pleasure and joy and laughter,” Mira said. “G-d loves me so much because He gave me Shabbos.”

“I have a beautiful gift called Shabbos in my storehouse that I want to give to the Jews. Go and tell them.”

What was the purpose of this special gift? Rashi says that Hashem gave us the gift of Shabbos to make us holy. And what specific element was Moshe to tell the Jews? About the immeasurable reward for people who observe Shabbos (Gemara Shabbos 10b).

It took more than a decade for Mira to commit to observing Shabbos. But since making the decision to do so, she has constantly grown in her excitement and sheer thrill of keeping it, repeatedly seeing the beautiful rewards of its observance.