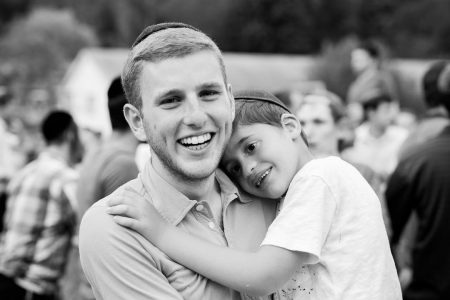 This essay is not intended as a source of practical halachic (legal) rulings. For matters of halachah, please consult a qualified posek (rabbi).

Looking around at our Orthodox communities, wearing a Kippah or Yarmulke at all times appears to be a halachik requirement. But a deeper look at the halachik sources reveals a fascinating discussion that spans Jewish history. The gemara in Kiddushin 31a states:

Rabbi Yehoshua ben Levi said, “It is forbidden for a person to walk four amos with an upright posture. As it says [Yeshayahu 6:3], ‘The whole world is filled with His glory.’” Rav Huna the son of Rabbi Yehoshua would not walk four amot with an uncovered hear. He said, “The Divine Presence is above my head.”

Based on the gemara above, the Tur (אורח חיים הלכות הנהגת אדם בבקר סימן ב) writes,

And he should cover his head as it is also stated (above), “Rav Huna would not walk four amot with his head uncovered.” He said, “The Divine Presence is above my head.”

…He should cover his head.

It is forbidden to walk with an upright posture, and a person should not walk four amos bare-headed.

Nevertheless, despite the implication from the above sources that one should always cover one’s head, the Gra (ביאור הגר”א אורח חיים סימן ח ) seems to poskin otherwise:

The general rule is that there is no prohibition of being bareheaded ever except in front of great people and during prayer, then it is ethically appropriate. [Covering one’s head] the rest of the day is for holy people who constantly stand before G-d.

How can we reconcile these seemingly divergent positions? Let’s see the Chofetz Chaim in the Mishnah Berurah Siman 2:11:

It is the practice of the diligent to wear a head covering for distances of even less than four amos, even when one is sleeping. There are those who posit that the four amos rule is not prohibited by the strict application of Jewish law, rather is a practice of modest individuals. Nevertheless, the Taz has already written in Siman 8, that in our times (17th century) it is a definite prohibition to be bareheaded, even while sitting in one’s home…

Based on the above, would there ever be a leniency not to wear a kippah in a secular work environment where one’s job could be jeopardized? Rabbi Mordechai Becher explains:

Please find below a summary of shiurim and articles, some with source sheets, to prepare a class on “Why and When Do We Wear a Kippah?”

Why Do We Do That? Wearing a Kippah  by Rabbi Adam Friedmann

Halachik History of the Head-Covering by Rabbi Ya’akov Trump

Kippah: A Blessing On Your Head by Rabbi Shraga Simmons

When the Wind Blows, The Kippah Will Fall by Rabbi Mordechai Becher

Wearing a Kippah at work:

The Kippah Quandary by Ross Hirschmann

The Kippah Debate by Richard Rabkin