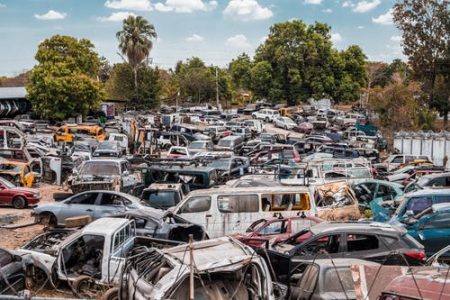 Jack was a hardworking man.  He spent all day driving around town in his pickup truck, hauling heavy materials from one construction site to another.  And that was how he made a living, and supported his family.  However, he was only barely getting by, and every penny counted.

Jack’s eight year old son Jim had an old-fashioned tape recorder that he would listen to music on.  One day, to his dismay, the tape recorder stopped working.  Jack said to his son:

“Come on, we might as well take that old tape recorder to the junkyard.  Maybe they’ll give us a couple of pennies for it.”

As they were driving, Jim made a strange sounding suggestion to his father:

“Dad, maybe we should dump this pickup truck in the junkyard as well?”

“What are you talking about?  Why would we do a foolish thing like that?”

“Well, because the tape player in the truck doesn’t work anymore.”

“Son, that tape player hasn’t worked in years!  Who cares?  As long as the truck gets me to where I want to go, then it’s okay.”

When Jim was thirteen years old, the old air conditioner in his room finally conked out.

“Well son, help me lift it up into the truck.  We might as well take it to the junkyard and get a few dollars for the old thing.”

“But Dad, maybe we should junk your old pickup truck as well?”

“What are you talking about?  Why would I do a foolish thing like that?”

“Because the air conditioning in the truck doesn’t work anymore!  So what’s the difference?”

“The difference is that the truck still works!  As long as it still gets me where I need to go, then who needs air conditioning?”

When Jim was seventeen, he took a course on mechanics in high school.  In the evenings, he started tinkering with his Dad’s old truck.  One day, he came to his father with a big smile on his face.

“Dad!  Good news!  I fixed the tape player and the air conditioning in your old truck!  Isn’t that great?  What’s wrong?  Why do you look so sad?”

“Because the tow truck should arrive here any minute.  It’s going to tow that old truck to the junkyard!”

“But why?  I just fixed it!  The car finally has music and air!”

“Who cares?  The engine just died!  If the truck can’t get me where I need to go, then all of the other things don’t matter!”

The Beis Hamikdash helps us get where we need to go, namely, to create a spiritual connection with Hashem.  This is the main thing.  Independence is nice, but we can still serve Hashem without it.  So the answers to the questions are very simple: