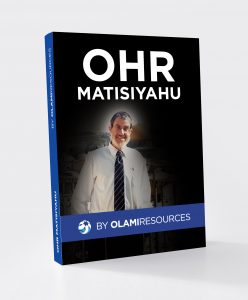 The Jewish world suffered a great loss last week with the untimely passing of Rabbi Matisiyahu Rosenblum zt”l. Rabbi Rosenblum served as a senior collaborative writer and editor on many shiurim in the Morasha Curriculum between 2009 – 2014. During a shiva visit to his eldest brother, l’havdil bein chaim l’chaim, Rabbi Yonason Rosenblum, Shlita, we gained further insight into Rav Matisiyahu’s “incredibly productive life.” (Please see Mishpacha Magazine for the moving hespid.)

After growing up in Chicago, Rabbi Rosenblum graduated second in his class at Yale, and then went on to learn at Yeshivos Machon Shlomo, Mercaz HaTorah and Heichal HaTorah. He developed close relationships with, l’havdil bein chaim l’chaim, the Roshei HaYeshiva, Rabbi Beryl Gershenfeld, Shlita, and Rabbi Zvi Kushelevsky, Shlita, respectively. He also learned from Rav Moshe Shapiro zt”l.

Rabbi Rosenblum was blessed with a great mind and a powerful mida of emes which he diligently applied to all aspects of his life, including his learning, teaching and writing. He was a voracious reader and acquired a great breadth of Torah knowledge. He served as a shoel u’meishiv at Machon Yaakov for fifteen years. Rabbi Rosenblum would take long walks with the students enabling them to build a trusting relationship with their rebbe and share their questions about Yiddishkeit which he skillfully addressed. He purchased a library of psychology texts to gain tools to better understand and teach his talmidim.

Each Morasha shiur involved the participation of several writers and editors. Rabbi Rosenblum was specifically assigned several classes on the Morasha Syllabus that were especially challenging to teach newcomers to Yiddishkeit such as The Jewish Understanding of G-d, The Holocaust and Jewish Faith, The Chosen People, and Sacrifices and the Temple, because of his great ability to present the Torah perspective on any topic clearly and deeply. He was also assigned important shiurim that would benefit from his insight and sensitivity into personal development such as Relationships and Marriage, Judaism and Personal Growth, Defining One’s Role in Life and Achieving Greatness, and Jewish Leadership. His writing was compelling, carefully thought out, and included important maarey makomos to help empower rabbis and educators to reach out, teach and inspire unaffiliated university students and young professionals.

Rabbi Rosenblum’s following introduction to the class on Defining One’s Role in Life and Achieving Greatness illustrates how he captured the students’ full attention and drew them into learning:

Why do such stories have such a universal appeal? By the time this class is over the answer will be obvious. The power of these tales comes because each of us identifies with these figures. In the depths of our soul we recognize that, in G-d’s profound plan, each and every one of us really is completely necessary. Not that we are striving for externally acclaimed stardom. Rather, each and every one of us is a Chosen One who has a unique mission that only we can fulfill in the full revelation of G-d’s glory.

Please click here to download Ohr Matisiyahu, a special E-publication of the collection of Morasha Syllabus shiurim that Rabbi Rosenblum served as a senior collaborative writer and editor.

Rabbi Rosenblum’s legacy lives on through his family, talmidim, friends, and community, and through his pivotal role in the Morasha shiurim that continue to educate and inspire students worldwide.