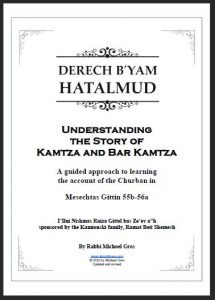 Olami rabbis seeking a new compelling way to engage their students this Tisha B’Av can turn to Rabbi Michoel Gros’ Talmud shiur on Understanding the Story of Kamtza and Bar Kamtza.

Beginning on the bottom of Gittin daf 55b, the Gemara recounts several tragedies at the time of the destruction of the second Beis HaMikdosh. The Gemara states that Yerushalayim was destroyed because of the actions of two individuals – Kamtza and Bar Kamtza. It is necessary to analyze the actions of these men to understand why the Gemara ascribes culpability to both of them.

The Gemara relates that the churban was triggered by a party where the host intended to invite a man named Kamtza, but instead a man named Bar Kamtza arrived. The host ordered Bar Kamtza to leave. Bar Kamtza offered to pay for his meal, yet the host refused. Bar Kamtza upped the ante to the extent that he would pay for the entire banquet, yet the host refused and threw him out! Bar Kamtza said to himself, “Since the Rabbis were sitting at the banquet and did not protest, it must be that they agreed with the host.” Bar Kamtza then concluded, “I will go and spread rumors to the Roman government about the Jews,” which eventually led to the destruction of the Beis HaMikdosh.

What did Kamtza do wrong? Why is he partially blamed for the destruction of Yerushalayim?