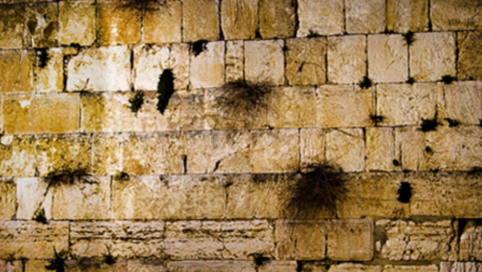 I love the Western Wall. It is a kaleidoscope of the entire Jewish people. One can go there for Mincha and have, as a part of the minyan, an Israeli soldier, a Sephardic Jew from South America, someone from Mea Shearim, a few French or American tourists … a geography that reflects its history. The crowd is always different. Some come to pray, or to put a note in the Wall or to photograph or to put on Tefilin. There are bar-mitzvahs, brides and grooms, those in pain and non-Jews who come to give deference to the God of all people, just as they did when the Temple stood. Each has his or her private experience in the context of one of the most famous places on earth. For some it is our national symbol. For others, the remnant of the holy Temple. For all, a place of special meaning.

For four hundred years under the Turks, and for another thirty-four long years under the British, those Jews who made their way through the narrow, hostile alleys of the Mugrabi Quarter found themselves a thin sliver of space between themselves and the Wall. There they were harassed in so many ways – sheep, excrement and arrest were all part of the bargain. When I see an old Yerushalmi or a Sephardic Jew praying at the Wall, I recall the photos and etchings from yesteryear and I think to myself – it was people like you who for hundreds of years kept the flame of our connection to this place alive. And I feel so much gratitude. And then I see our soldiers there and I think of the liberation of this awesome place in 1967, and I have the same gush of gratitude.

How tragic that the Women of the Wall don’t feel as at home as all those other Jews. For sure, we must all strive mightily to solve this situation. The Wall is not a place for disputes and separations; it is a place where we ought to transcend all our differences. I believe the Women of the Wall are sincere in wanting to come and pray to God. They are indeed very upset and that is not in the spirit of this awesome and holy place. I know, and I feel inspired by the fact that all Jews recognize the Western Wall as our holiest synagogue. I know that assigning any group to Robinson’s Arch is a consolation prize – we all know which part of the Wall Jews historically prayed at.

So what’s the action plan?

Let’s agree on what we can agree to. Although overall, male-female attendance is reflected in space allocation, I am enraged that the women have such a small enclosed section for rainy days or blazing hot days – compared to the loads of enclosed space for men. Only a handful of lucky women – who must climb some stairs – get to stand there. I am indignant when I see how far out of the enclosed area women have to stand on Chagim or other busy-days (although the mechitza is often moved outwards into the men’s space – but not enough). If women need more space and so do men, why then, is the women’s area not extended backwards? I am delighted that women can go and pray in the tunnel are right opposite the Holy of Holies1. I would like to have seen them get a dedicated space in the tunnels where no tour groups will pass them by. Full gender separation on festivals is a good idea (the crowds get so hectic, people really do get squashed against each other), but why must the women always come off second best, temporary bathrooms and all? (Of course, the bathrooms do happen to be on the men’s side. But every problem has its solution.) For these and other injustices I would like to lend my voice. I will be the first to fight for the rights of the holy females of the Jewish people – and I mean by that all Jewish females.

But there is a huge difference between that and the issues of the Women of the Wall. “Women of the Wall, a multi-denominational women’s tefillah group, gathers together each Rosh Chodesh to pray at the Kotel, in protest of these imbalanced laws,” writes one blogger sympathetic to their cause2. What is the imbalance? “On the left side, men are allowed to lead tefillah, sing publicly, and pray with a tallit and tefillin by the Kotel. On the women’s side, none of these things takes place. A woman cannot read from a Sefer Torah, wear either Tallit or Tefillin, or participate loudly in Tefillah.” But, many Women of the Wall deny that. They say they just come to pray.

Some go even further. Joshua Hammerman3equates all of this with gender separation, it being quite obvious to him that separation of the sexes is always inequality. (Apparently some recent legal decisions in the USA on gender separation in schools and their positive results4) as well as some noted scholars5 do not agree I have not heard the Women of the Wall advocate for the cancellation of the mechitzah, so let’s not advocate for them what they are not advocating for themselves.

But make no mistake. These women are forces for change. They started out just as a prayer group. Now, they are careful to make up a minyan. They have developed their own siddur, replete with a prayer for the Women of the Wall. (Mind you, this is not an egalitarian minyan. Although men can attend the Torah Reading of the Women of the Wall (in front of Robinson’s Ark), no man will ever be called up to that Torah.) They are not of the live-and-let-live sort. I have heard many of them repeatedly say, as Allison Green did, that they are fighting for religious pluralism in Israel6, that theirs is a the center of a broader battle for gender-equality7. They are media savvy, a handful whose stories of protest drown out the story of the over one million Jews who visit the Kotel annually. They know better than I do, that the people they offend the most are not the men far away, but those females on the same side of the mechitza where they are standing. (Many women have told me that they cannot concentrate on their davening when the Women of the Wall sing in the loudest of voices and won’t tone down. By contrast, the Carlebach minyan on Friday night specifically prays later than other minyanim in order not to disturb.)

The Women of the Wall often state that theirs is a fight for pluralism. This is a terrible play on words. Pluralism is the possibility of different expressions within acceptable parameters. It cannot create those parameters and it cannot be used to get rid of acceptable standards, whatever those standards are. I would not dare to keep my shoes on in a mosque in the name of pluralism, just as I would not take them off in a church. I may not break the speed limits in the name of pluralism, even if I think the speed limit is ridiculous, just as I may not hold dual citizenship in many countries, even if I am sure that this does not compromise my loyalty. Judaism is pluralistic. There are dozens of different kinds of Sephardim (Temanim, Moroccans, etc.) each with their customs. There are tens of Chasidic groups, each with their variations in stress and interpretations of Judaism. There are Litvaks, and Yekkes, Yerushalmim and Italian Jews. But it is just about these parameters that we must have our discussion. Clearly not everything goes. It is perverse to push the envelope and then try and avoid a concrete discussion on the issue by saying that you are doing it in the name of pluralism. That is a discussion-killer; a feel-good buzz word that is ultimately meaningless until we have agreed what Judaism is and what it isn’t.

The Kotel, being especially holy, must set its boundaries even higher. I often ask people to stop talking on their cellphones at the Wall. Surely, everyone is capable of understanding that irreverence. My confessions get worse. I wish that both men and women would dress up and not down when coming to this awesome place. ‘No’ to dress standards imposed in the streets of Jerusalem and Tel Aviv; ‘ Yes’ to some sensitivity in our holiest of sanctuaries! In other words, this is a place for the public, but it is not a public space with all the rules of a public space. It is a holy space8. And holy spaces require more than the normal principle of harm to apply9.

But no, I have never interfered, or thought to, with the Women of the Wall. However, I know how many people feel hurt and upset by their need to fight their battle at just this place. Let the Women of the Wall fight for what they believe in – and these are major, major issues that deserve our attention. But where and how these battles should take place bears consideration. I think it is vital that we not turn the Kotel into the center of the battle-field. Here is one place where unity should prevail above other values. Let the issues of equality be fought on the planes of the electorate, legislation, the Chief Rabbinate, synagogues, buses …. But let’s have one island of peace, not because this is some Jew’s Wall more than someone else’s, but because we all just want to feel together in this one spot – a sanctuary of unity. To those who would reject my message, I do not question the sincerity of your motives. I would just wonder… just a little… whether you are not elevating a certain message that is drowning out all others. My proposal is that we fight for unity at the Wall instead, and fight for equality in other forums. (And oooh do I know the come-backs on that one, “Is it unity, when women are relegated ….” etc. But that is to confuse terms and ultimately values.)

Ever since Carol Gilligan produced her study in 198210 showing that men and women are indeed very, very different, we have given up on the idea that women need to be men and have instead reframed the issues as how can women be women. The women’s liberation movement has come to reflect many values that I, as an Orthodox Jew, can clearly identify with. And I will fight anyone, including my fellow Orthodox Jews, for the sake of those values.
And so, to the Women of the Wall, I offer a challenge. As a male Orthodox Jew, I invite you to sit down with me and see where we can join forces in all those areas of discrimination against women where we can find common cause. I invite you to help me make good on the claim to all Jewish women: “Judaism glorifies you.” Now there’s a message we ought to get out!

Leave a Reply to coachmentor