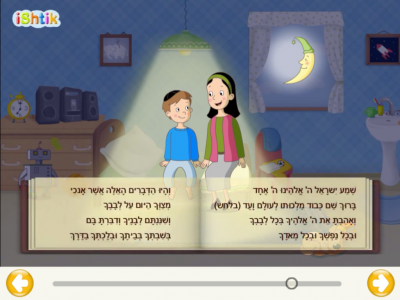 Sruly Meyer has served as the in-house graphic designer for Chabad Lubavitch of Northern Virginia where he was based for four years, and for Sameach Music, a leading wholesaler of Jewish Music. After an exciting six year tenure at Sameach, Sruly established his own company, Designs By Sruly, located in the Crown Heights section of Brooklyn, New York. Designs By Sruly is a full service design and marketing company. Many Jewish organizations and stars in Jewish music industry have turned to Designs By Sruly for all their creative needs including: Mordechai Ben David, Lipa Schmeltzer, and Benny Friedman.

iShtick, a developer of Jewish educational apps for children, has announced the release of its inaugural app, a ground-breaking, fully interactive, musical siddur, designed for children ranging in age from two through nine. This is a powerful app that could come in handy for any beginner to Judaism, a student of yours, or a young member of your congregation!

Kids Siddur, which is available for all iOS and Android devices, including smart phones and tablets, is a full-featured app designed to appeal to young children with state of the art graphics, interactive features, quality music, over twelve minutes of original animated content that teaches them to embrace tefila with open arms.

“While there are many very nice Jewish apps out there for adults, there are no apps that are really entertaining for our children, that can stand up next to the higher quality games that are available,” said Netanel Hershtik, creator of iShtik.

The father of three young children under the age of seven, Hershtik saw the need for a line of Jewish educational apps firsthand, as his own children would often commandeer his phone. “Everyone uses smart phones,” reflected Hershtik.  “But there is nothing out there with educational content designed specifically for Jewish children.”

Kids Siddur features the entire davening typically said by the younger set, along with fun activities designed to delight and entertain.  As the cantor of the prestigious Hampton Synagogue, with two albums to his credit and as a fourteenth generation chazan, Hershtik refused to compromise on the musical quality of the app, enlisting the services of his nephew, Shlomo Zichel, an eleven-year-old finalist on the renowned Israeli prime time reality show, School of Music.  Kids Siddur also allows users to toggle between Hebrew and English modes with just the touch of a finger.

“This app brings the traditional daily prayer to life, with fresh new arrangements,” explained Hershtik.  “It is a fun, cool and entertaining Jewish animated app that teaches little ones Jewish values and prayers.  There is no other app on the market that does that.”

Kids Siddur is available from both iTunes and Google Play for $2.99 and is just one of several apps being developed by iShtik.