Yoni Mozeson spent over 10 years creating award-winning marketing campaigns at major NY ad agencies – including Ogilvy – on accounts like American Express, Citibank, Huggies, Duracell, Crest and Apple. He provides strategically driven marketing solutions in a variety of areas including, healthcare and technology. Because of his unique background as a Marketing executive with ordination from Yeshiva University, Yoni attracts many nonprofits – including the launch of Nefesh B’Nefesh, MASA, and raising millions for IESF One Family. See his Nonprofit portfolio at www.adrabbi.com.

In my 20+ years in multimedia and online marketing, I have found that the biggest barrier to success is not knowing what you’re selling because you never gave thought to your “MindPrint” – the name I give to research-driven insights into your target audience’s most compelling concerns and emotional needs.

What’s the real reason you bought that iPhone?

For example,  Apple has a clear MindPrint. They sell to people’s deepest desires to be cool and “with it.” (especially those who are not). So Apple has to have the most  “sleek design” and  the coolest functionality. When Samsung did the same, Apple stock took a nose dive.

Why do you want an American Express card? 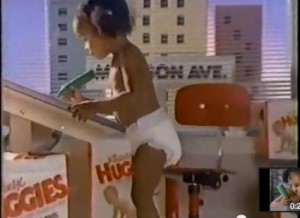 I wrote commercials for American Express and Huggies diapers among many others during 10 years on Madison Avenue. In all the focus groups I attended, The MindPrint of American Express was people’s craving to feel important. They sell “prestige” (snob appeal).

My commercials helped Huggies overtake Luvs and Pampers in sales (both owned by the giant P&G). Why? The diapers weren’t better. Our commercials featured babies in different executive professions. The subtle message was – our diapers will make your child happy and therefore more successful. It struck an emotional chord with parents who enjoy projecting their future dreams of success for their children (even when their kids are 2 years old). The Huggies MindPrint was what every parent wants: confirmation that their baby is exceptional and will be a success story. See many more examples at http://mindprintmarketing.com/.

When I started my own marketing company, we launched techs and biotech’s. Since I have Semicha from YU, I have been approached by many nonprofits – and that’s my true passion, putting those same principles to work for organizations that reach out to do G-d’s work in the world. Thus the name of my nonprofit portfolio http://adrabbi.com/.

You don’t have to be a big corporation to do research. Shalom Task Force combats domestic abuse in the Orthodox community. After talking to case workers and hotline volunteers, the MindPrint became obvious.  The shame of calling for help was a greater barrier for abused women than the abuse itself. Once we knew the MindPrint the headline wrote itself (“It hurts to call a domestic abuse hot line. It hurts more not to.”)

This ad resulted in an outpouring of calls and has been running for many years. Abused women realized that we knew exactly the terrible dilemma they were facing. Shalom Task Force was an organization abused women could trust because “Shalom Task Force knows where we are coming from.” 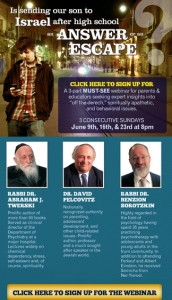 Kesher is a post-high school Yeshiva in Jerusalem. They deal with kids who are “off the derech” or who have recently overcome emotional or substance abuse issues. I spoke to the staff, the kids, their parents, alumni, and referral sources. To cast a wider net, I produced a  webinar featuring  Rabbi Dr. Abraham Twerski, Dr. David Pelcovits and Rabbi Dr. Benzion Sorotzkin.

The headline of the flyer and HTML landing page was “Is Sending Our Son to Israel After High School an Answer or an Escape?” The webinar addresses the MindPrint of parents, who feel alone, confused and powerless and are hoping that a year in a spiritual environment in Israel will straighten their son out

Bottom line, Kesher is selling expertise and trust. They have the professionalism, knowledge  and experience in working with many families who are grappling with tough family issues. 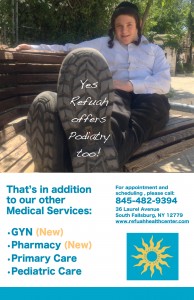 Sometimes “what you’re selling” is obvious. This ad I just did for Refuah Health Center was in response to the fact that the podiatrist at their upstate location was underutilized because no one knew Refuah offered podiatry. MindPrint – I need a good podiatrist up in the Catskill Mountains and I don’t know where to get one.  Headline on our target market’s shoe, “Yes Refuah offers Podiatry too!“ Simple and straight forward.

When I launched Nefesh B’Nefesh they had tremendous insights into why Americans were  coming and not coming on Aliyah. The MindPrint was to remove fears that moving to Israel is a financial sacrifice. 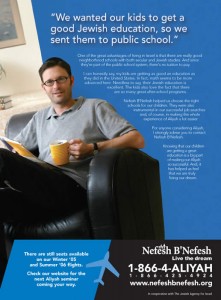 Try doing the math after you factor in Yeshiva Tuition! This led to the headline: (“We wanted our kids to get a good jewish education so we sent them to public school.”)

We also wanted to reassure parents that the transition for their children wouldn’t be as drastic as they feared. (“Our son gave up a lot, he used to play shortstop, now he plays third.”).

The MindPrint also expressed itself in the look and tone of Nefesh B’Nefesh ads and videos which show happy, confident and successful people. The message being –  Israel is a country where you can fulfill your destiny and live your dream of professional fulfillment, family values, and Jewish values. 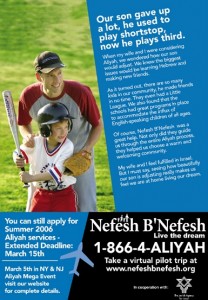 Before you start marketing, give lots of thought to your organization’s ‘MindPrint.”  Talk to your participants, (students, patients, clients – what ever the case may be), your donors, your staff, your board, and all your stakeholders. Ask them, “what are my target audience’s most compelling concerns and emotional needs and what do I provide to fulfill those needs?”  The answers may surprise you. An outreach organization, for example, may think “I’m preventing intermarriage.” But part of your target audience may be intermarried and doesn’t see it (or want to see it) as such a tragedy. But a totally different approach would touch them deeply. I am happy to discuss. Feel free to contact me at yoni at mindprintmarketing dot com.