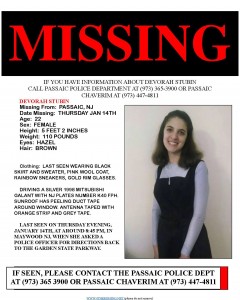 Shocked, stunned, numbed, and speechless; these are just a few of the words which describe our feelings this Motzei Shabbos. As Shabbos came to a close we were informed that the massive search for the safe return of Devorah bas Shoshanah Rus and the Tefillos which were being said on her behalf had been halted. As Shabbos ended the news travelled quickly that Devorah Stubin was not coming home. Our hopes for her safe return were dashed as news of her demise was quickly disseminated in the Jewish world and beyond. Plans for a celebration when she would be found were now replaced with arrangements for a funeral.

I did not know Devorah bas Shoshanah Rus; many who did tell me she was indeed a special Neshama. Although I did not know her, I do know many of those who sacrificed Shabbos with their families to spend Shabbos in Maywood, New Jersey in the cold and in the rain. Jews from Brooklyn, Lakewood, Monsey, Teaneck, Elizabeth, Passaic, Clifton and other places all joined together through their hearts and hands, left the comfort of their homes and their families to search and attempt to find a young woman whom they never had met.

They survived on an hour of sleep here and there and on high energy caffeinated beverages throughout the day. They did not care about hot Chulent or warm beds; they did not think about what Shul they should go to or not go to; their focus was singularly on finding of Devorah bas Shoshanah Rus. No one cared if you were Chassidish or Litvish, Modern or Open Orthodox; if you wear a hat or if you wife wears a Shaitel or a Tichel, all they cared about was Devorah bas Shoshanah Rus.

Dozens and dozens and volunteers left their warm beds this Shabbos to help find a young woman whose name most had never heard of before Thursday evening. The togetherness and the unity allow me to feel consoled and that is good. The outcome was not what we davened or hoped for; however, the display of unity is what we daven for.

I was privileged to count among the many volunteers who gave up their Shabbos for Devorah’s sake two of my own sons. Both of them spent hours and hours searching and looking for Devorah bas Shoshanah Rus. This morning at 7 o’clock my son and I left the house together.

He was on his way to search for Devorah and I was on my way to search for Hashem.
Before I headed to Shul I walked him to his car. I proudly stood by as he entered the car and gave him a brocha for success. As I watched him pull away from the curb, I thanked Hashem for giving me children who care enough about His children to know that sometimes serving Him means even driving on Shabbos. As Shaya turned the corner, I turned to Shul. As I walked I wondered which one of us was the one to emulate: the rabbi on his way to Shul or the rabbi’s son on his way to find a lost Jew.