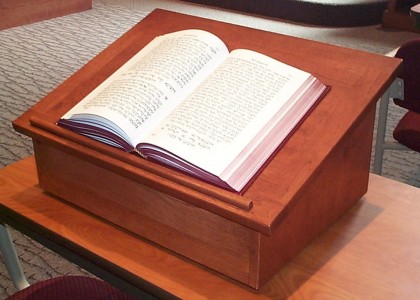 One night towards the middle of zman, our shiur had a little get-together with our rebbe. We had only recently begun to be bound by the glue commonly found in tight-knit groups, shiurim especially. Consequently, we were anxious to fortify this bond as a shiur and with our rebbe in a serious but less intense environment than morning seder; this is how we ended up in the shiur room, half eaten bagels and overturned plates on the tables in front of us – the satisfied look of finally being satiated on each of our faces, as we headed towards the later hours of the night.

We were in the midst of the first question-answer session with our rebbe, and as time went by, the questions became heavier, more profound, more raw. The room was silent except for the hum of the air conditioner. We all sat on the edge of our seats, waiting for our rebbe to formulate his answer to a life-impacting question, eager to hear what would leave his mouth.

He walked around the perimeter of the room, picking out certain seforim from their places on the surrounding shelves to illustrate his point. There was an eight-volume set recently published by a successful lawyer, certain works by tremendous scholars in the world of Torah who never pursued ordination and yet penned their masterful grasp on complex concepts nonetheless, and even two medieval doctors whose works are quintessential and an absolute staple and anchor in any Jewish collection anywhere, no matter the denomination: Ramban and Rambam.

Here we sat, young men in a serious and high level institution, eager to know how to continue with our growth outside of yeshiva, after our precious phase of incubation will come to a close. It was clear – as it still is – that the students sitting in that room were not all destined for the rabbinate, were not all on a scripted path to continue onward to more yeshiva and learning followed by ordination and a rabbinic position. Rather, in that room sat what will surely be some of our generation’s top doctors, lawyers, teachers, psychologists, and at least one architectural engineer. Our rebbe’s message was crystal clear: our concern and fear that not staying on a yeshiva path, not to remain insulated and isolated, would consequently result in our falling off of the path was unfounded. On the contrary, that very fear and outcome can be overcome – no matter the field or future we find ourselves in – through a consistent devotion, commitment, and sacrifice to the Creator and the performance of serving Him. My failure to pursue my Judaic studies in another yeshiva, my not running blindly, arms-flailing, towards smicha, does not prevent me from ultimately becoming a Maimonides or a Nahmanides; but the absence of devotion, commitment and sacrifice in a consistent matter certainly may.

As within all walks of life, the availability of useful and effective resources, greatly increase the chances of success; undoubtedly, spending time learning in yeshiva – as discussed in earlier forums – allows for the accessibility to those kinds of resources in the context of becoming and remaining a God-fearing, consistently devoted and committed religious servant, willing to sacrifice in order to succeed in one’s spiritual mission. Spending time in an incubator allows us to cultivate within ourselves the religious and spiritual people we hope to become. It is there that we are permitted to lay the foundation upon which we will build – with the help of the Creator – the great hall of our avodah, the actualization of our potential, the acquisition of the strongest parts of our neshama, yet to be revealed. It is only there that we find the unique opportunity to focus exclusively on ourselves, alongside our peers, with the guidance and direction of those bigger than us. Only in yeshiva do we find endless hours of exposure to some of God’s greatest treasures that He gifted us, as well as the resources needed to uncover the rest that are yet to come.

On Seder night we read from the Haggadah, “In the beginning, we were idolaters.” Our rabbis homiletically render this to teach that on the one hand, we are not a religion that buries our past, pretending it was always “all good,” and on the other: our beginnings – the places we come from – need not determine the places we go. A person can reach extraordinary places, regardless of how ordinary his origin; but certainly, if one simply dreams of a destination but exerts little effort in making the path there accessible to him, it will be considerably difficult to reach.

Yeshiva allows us to explore this accessibility, it allows us to blaze the path forward. Its experience is a process to a potential means of attaining the things we both dream of and rely on. But like many processes, it comes in many levels and stages.

No surgeon would exit an operating room after the initial incision, leaving an open, bleeding, vulnerable patient behind, and then have the gall to proclaim a “successful operation.” In the same sense, a voyage abandoned midway is no voyage – it is an orphaned project, a neglected journey; our journey towards the destination of the Truth of God and Moses His Servant is no less a procedure, no less a voyage. By no means are we an end product when we leave the beis medresh as a bachur for the final time (in Judaism, we grow as long as we breathe), but hopefully, with the help of God, we start off on the next leg of our long trip in the right direction.

A single year in yeshiva is a wonderful thing, but come summer, the foundation is only as strong as that one year could build it.

The Gemara in Kesuvos recalls the inspiring account of Rabbi Akiva’s homecoming, and how he bravely turned back and returned to yeshiva for 12 additional years without so much as a crossing of the threshold of his own home. The obvious question is oft asked: why didn’t he simply enter his house and greet his wife whom he hadn’t seen in 12 years? A powerful answer given is that 12 years of learning, with an interruption, followed by another 12 years is in no way as powerful and real and a consistent stretch of 24 years. The difference transcends amounted hours, it is more than cumulative time.

Our time in the incubator is precious, and, in most cases, limited.

The case for two years instead of one is an important one.

Because the difference is exponentially greater than just one year.

The author is in Shana Bet at Yeshivat Shaalvim and is a graduate of Davis Renov Stahler High School. He has also published on NLEResources.com an article entitled, From the Desk – Er, “Shtender” – of a Shana Aleph Talmid.