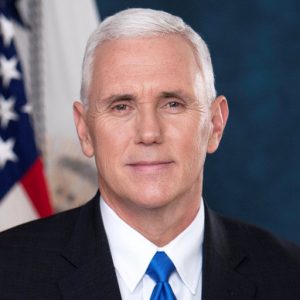 Vice President Mike Pence hosted a historic celebration at the White House on Tuesday in honor of Yom Ha’atzmaut.  He made headlines for remarking that President Trump is giving serious consideration to moving the Israeli embassy from Tel Aviv to Jerusalem.  I had the great privilege of attending the event and while I am very excited about the prospect of an embassy move, these were not the comments that gave me goose bumps.

I was incredibly moved when Vice President Pence said:

“Thank you for being here today at the White House to celebrate this day, the anniversary of a moment that will be remembered for eternity…You’re all here, all of you, regardless of your home, your creed, because on this day, the fifth day in the month of Iyar in the Hebrew calendar in 1948, nothing short of a miracle occurred.  On that day, in the ancient and eternal homeland of the Jewish people, the state of Israel was reborn.

“On that day, the Jewish people’s 2000-year exile, the longest exile of any people anywhere, ended.  And on that day, a prophecy literally came to pass.  And I believe in my heart that God Himself fulfilled his promise to His people.  The Lord God tells us… “Behold, I will cause breath to enter into and ye shall live.”  And Israel lives today…

“Today and every day, the State of Israel and her people bear witness to God’s faithfulness as well as their own.  How unlikely was Israel’s birth?  How much more unlikely has been her survival?  And how confounding against all odds, both past and present, has been her thriving…

“For my part, my Christian faith compels me to cherish Israel as well as our deep alliance and historical ties…On this day, so many years ago, only three years after the horrors of the Holocaust, Israel was given life by a people who had looked into the eye of the angel of death.  The Jewish people have persevered through history’s darkest hour, for in that darkness shine the light of faith, of hope, and of love…

“And so today we celebrate and we marvel at all that Israel and her people have accomplished…Israel is an eternal testament to the undying fortitude of the Jewish people, to the unfathomable power of human freedom, and to the unending faithfulness of God.  Indeed, though Israel was built by human hands, it’s impossible not to sense that just beneath their history lies the hand of heaven [emphasis mine].  For as God tells us in his word, speaking to his people so long ago, “I know the plans I have for you, plans to prosper you and not to harm you, plans to give you hope and a future.”

Standing in the most powerful building in the world, listening to arguably the second most powerful man in the world talk about the US-Israel relationship, I couldn’t help but look at the Vice President and wonder why we ourselves can’t speak more like him.  When describing the meaning of Israel’s Independence Day, Vice President Pence didn’t just make the standard, albeit important, reference to our countries’ shared values such as liberal democracy, he didn’t just banally talk about a strategic alliance, he spoke about God.  It felt as though among the guests invited to celebrate Yom Ha’atzmaut at the White House, was God Himself.

Do you feel self-conscious putting on a Tallis and Tefillin in an airport terminal? If so, you’re certainly not alone. Many observant Jews are uncomfortable wearing a yarmulka at work or make great efforts to avoid having to make a beracha on food or be seen davening or benching when among non-Jews or non-observant Jews. Yet, many of our Christian or Muslim counterparts aren’t shy or reluctant at all to mention God or to pray in public.

In working with a pastor who is a great supporter of Israel I have noticed something amazing.  On numerous occasions, when confounded about a situation and trying to decide what action to take, he has said to me, “Let’s take a moment and pray on it.”  When describing how he came to a certain position, idea, or plan, or what he credits for a particular achievement or success he has said, “I was looking for inspiration and so I prayed.”  While obviously the style, content, and destination of his prayers are not in consonance with Judaism or Torah, there is something inspiring about his lack of inhibition to reference faith in his everyday conversation.

It is not just pastors or the Vice President who are comfortable talking freely about God in casual conversation.  In an interview about his retirement, Mariano Rivera, the greatest closing pitcher of all time, reflected on his successful Yankee career and said:  “Everything I have and everything I became is because of the strength of the Lord, and through him I have accomplished everything.  Not because of my strength. Only by His love, His mercy, and His strength.”  How many of us if interviewed would as explicitly and overtly attribute all that we have accomplished to God?

To his credit, when David Friedman, the US Ambassador to Israel, spoke at the event, he proudly quoted the words from Hallel, “Zeh hayom asah Hashem, nagila v’nismecha vo, This day was created by God, let us rejoice in it.”  Elsewhere in Hallel we say, He’emanti ki adabeir, ani anisi m’od, which is normally translated to mean, I trust in God, out of great suffering I spoke.  The Slonimer Rebbe, Rav Shalom Noach Berzovsky, offers an alternative understanding.  He explains, he’emanti, I grow in emunah.  How? Ki adabeir, because I choose to speak about God.  When we reference and credit Hashem, when we talk to Him, express gratitude to Him and rely on Him, we grow closer to Him.  Hashem is not theoretical, He doesn’t live only in the four walls of the Shul.  Hashem should be part of our lives, referenced in our conversations and instinctively prayed to when we need to make a difficult decision or seek guidance and support.

To be clear, this is not about Vice President Pence’s politics.  I admire his faith and I respect his lack of defensiveness or discomfort with his strong religious values and convictions.  Though he is uncompromising in them, they have not held him back from achieving the second highest office in the land.  Recently, the Vice President was quoted in an interview saying that he never dines with a woman alone and he doesn’t attend functions without his wife “if there’s alcohol being served and people are being loose.”

The explosion from the Vice President’s bombshell disclosure was loud and the response was quick and harsh.  Pence drew criticism and scorn that ranged from mocking him, to questioning his character, and mostly accusing him of objectifying women.  Some wondered if he had just landed from a previous century.

I found the criticism remarkable, particularly since it came mostly from people who were more outraged by Pence’s behavior to safeguard his marriage, than they were towards certain elected officials who defiled theirs.  Instead of deriding the Vice President, they—and we—would do well to admire his commitment to what he once called, “building a zone around his marriage.”

A few years ago, I asked Dr. Ruth Westheimer what she thought were the most important ingredients for a healthy and strong marriage.  I was very surprised when among her answers was a steadfast commitment to observing the laws of yichud.  She explained that especially in our world of enticement and access, it is so important to remove temptation and opportunity before they ever arrive by pledging to never be alone with a non-family member of the opposite gender.  Being vigilant in the laws of yichud is not something to be mocked for, it is something to admire and for which we should be unabashedly proud.

Yet, how many of us, Torah Jews who observe the laws of yichud, would be comfortable invoking these practices in a public interview?  How many of us would so unapologetically promote what is in our time bizarre to many behavior?

Parshas Kedoshim enjoins us “Kedoshim tiheyu,” be holy and be sacred.  Rashi explains that holiness is achieved by excelling in the area of arayos, being cautious and vigilant in not being promiscuous.  The natural tendency towards giving in to temptation and desire in areas of intimacy is as old as the world itself.  The Torah wasn’t written for a utopian society or perfect people.  It legislates and regulates how imperfect, fallible people can and should live the most meaningful and values driven lives.  Be kadosh, create healthy separations and boundaries to ensure modest relationships and interactions.  Eliminate the opportunities for devastating mistakes by practicing safeguards like the laws of yichud and not being alone with a member of the opposite gender.

While there is nothing wrong with being inspired by others such as the Vice President of the United States, we are the ones charged with being role models for the world, proud examples of virtuous lifestyles and faithful living.  May we fulfill our mission as a mamleches kohanim, a kingdom of priests, by not hesitating to talk about God.  And may we realize our responsibility to be an am kadosh, a holy people, by excelling and setting the standard in safeguarding our marriages and relationship, by practicing modesty.

Leadership Vision – Its Necessity and Its Dangers