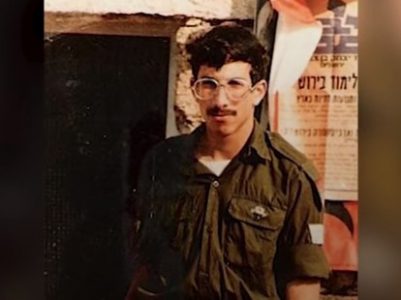 While all of “us” may have differing views on certain issues, one issue which has (unfortunately) always united us is death. I have never been at a funeral where one part of the family refused to attend because of hashkafic differences. I never heard of someone not paying a Shiva visit because they disagreed with the person’s world Jewish outlook. Therefore, today, a day filled passionate debate, I present a story which I hope is “Shave L’Kol Nefesh,” something we all can agree on and learn from.

When I arrived in Yeshivat Har Etzion in Elul of 1979 I was part of a group of thirty or so American boys who were savoring the opportunity of learning at the feet of Rav Aharon Lichtenstein ZT”L. For most of us, it was our first experience away from home in a distant country which spiritually we called home, while in actuality we felt like foreigners in a strange land.

When one of the administrators informed us that the yeshiva only provides hot water between 9 PM and 11 PM and we should all forget about the American practice of showering in the morning, we looked at each other with eyes which questioned, “Is this guy for real? No hot water in the morning?” And when he told us about the “expected procedure to follow when showering” namely that we should first get wet, then close the shower faucet, and then soap up, and only then use the faucet again for a quick final rinse, we were ready to catch the first flight back!

Most of the Israelis barely noticed us Americans and they certainly had no time to indulge our American juvenile nonsense. The Israelis were all in the Hesder program where they combined sixteen months of military service with three and a half years of full-time yeshiva learning. The Israelis were tough. They didn’t need to shower daily and they were able to subsist on bland white cheese spread combined with lots of vegetables. Bringing a box of Frosted Flakes into the eating area was not just frowned upon, it was outright forbidden.

Most of the Americans shared their woes together about the absence of hot water, the seemingly constant power outages and the lack of good old American food. There was one major aspect of Israeli life which none of us were able to get used to, and caused all of us much pain and anguish – even more than not showering in the morning! I am of course referring to the deep feelings of deprivation caused by the absence of Heinz ketchup. The lack of Heinz ketchup was deeply depressing to us American boys, and when someone’s mother came to visit (which was rare in 1979) and brought a bottle of the coveted ketchup, all of us lined up and everyone received exactly one ounce of the precious commodity.

There were no Israelis in our American consortium, that is except for a young man we called Zack. Zack Baumel was different. Although he had lived in Israel since he was ten, Zack was one of us. He had grown up like me in Brooklyn and attended until age 10 Yeshivas Etz Chaim on 13th Ave. and 50th Street. Don’t go looking for the building, the school closed in 1978 and Eichler’s Judaica now occupies the corner where the yeshiva once stood. Like me, Zack Baumel remembered the miracle Mets of 1969 and like me, he could recite the starting lineup of the last game of that amazing World Series.

Zack was born and bred American, he knew about American music and wasn’t embarrassed to admit it. He could sing “Bridge Over Troubled Waters” by heart even reaching the high notes as if he were Art Garfunkel. Zack was our personal acculturation center. He smoothed over the rough edges of Israeli yeshiva life for us and helped us integrate and feel part of the yeshiva. He was one of the guys.

He knew about the Yankees and the Mets as any other American boy, yet, he wasn’t just an average American boy. I realized this one night between midnight and two AM. Every night two bochurim had to do shmira around the parameter of the yeshiva. If you were chosen for the midnight to 2 AM shift, and it was January, you knew you were in for a cold night. One wintry night I rose from my bed at midnight and put on as many socks as I could physically handle. I left my dorm room to meet my fellow guard at the assigned spot. When I arrived, Zack Baumel was already waiting for me.

As we walked under the star-filled sky, we huddled close to each other to battle the frigid wind.

On this night, neither of us were in the mood to speak about baseball. Instead, as we walked for two hours in the Northern Judean Hills where the yeshiva is located, we spoke about our dreams and our hopes for the future. Zack, notwithstanding his American roots, was totally Israeli in essence. He loved the land and he was passionate and definitive about his desire to live in the land and to serve in the IDF. He felt it was the duty and obligation of all Jews to serve and to live in Eretz Yisroel. We discussed the issue long into the night, way past 2 AM. Zack was steadfast in his dogmatic belief that all Jews belong in Eretz Yisroel.

As the morning light began to appear in the east, we realized we had talked through the night.

Zack stopped walking as said definitively, “This is my home. Neither of us knows what plans Hashem has in store for us for the future, however, one thing I can promise you. My home is here and no matter what will happen and no matter where I may travel, I will eventually return to this land, and here I will be forever!”

On that cold January morning, neither of us ever imagined how prophetic Zack’s words would be. Zack Baumel was indeed forcibly exiled from his beloved land for almost four decades. He was captured on June 11, 1982, during the Battle of Sultan Yacoub in the 1982 Lebanon War. His unit was attacked and he and five other comrades were declared missing. Zack, along with Yehuda Katz and Zvi Feldman remained “Missing in Action” until April of this year.

Just the day before, in something which would have been unthinkable years ago, Russian President Vladimir Putin announced that the Russian army, in coordination with the Syrian military, had found Baumel’s remains. Israeli Prime Minister Benjamin Netanyahu flew to Moscow to meet with Putin and then received Baumel’s remains in a ceremony at the Russian Defense Ministry, where he was also presented with Baumel’s jumpsuit and military boots.

As the sometimes incomprehensible ways of Hashem played out, his flight home was specifically from a place (Moscow) where so many Jews in 1979 wanted to leave, but, were prohibited from doing so. Who could have choreographed a play in which a person (Vladimir Putin) – who in 1979 was a KGB foreign intelligence officer – now would be the key player in getting Zack home in collaboration with both the Jewish State of Israel and the Syrian Military? It wasn’t the way either of us thought or hoped it would be, nevertheless, he kept his word and Zack was home.

On the 29th day of Adar Beis, almost 40 years after assuring me that this land would be his permanent home, Zecharia Shlomo HY”D ben Yonah Z”L finally returned to the land he loved so much. Zack was laid to rest in Har Herzl with complete military honors. It took 37 years, however, Zack’s pledge made on that bitterly cold night in the Judean Hills was finally fulfilled.

When my wife informed me of the news, I immediately recalled the promise Zack had made to me almost forty years ago.

My reaction was disbelief and I began to cry. However, these were not tears of total sadness, as interspersed with the tears of grief were tears of relief and tears of closure as I and the entire Jewish world finally knew, that Zack Baumel was home. The promise had been kept. “There is hope for your future,” says Hashem, “your children will come back home.” (Yirmiyahu 31:16)

Rabbi Ron Yitzchok Eisenman has lead Congregation Ahavas Israel since 1997. His warmth, charisma, and active involvement in community issues have not only enabled the Shul to grow significantly, but also made him a beloved Rav in the entire Passaic-Clifton community. Born in Brooklyn, he is a musmach of Yeshivas Rabbeinu Yitzchok Elchanon and learned at many yeshivos in Eretz Yisroel. After learning in Kollel for six years and receiving Smicha Yoreh Yoreh from Rav Yosef Dov Soleveitchik, Ztz”l and Yadin Yadin from the Kollel L’dayanus at RIETS, he began his career serving the Jewish community. Rabbi Eisenman is also involved in many local and national communal organizations and has spoken at many public events and forums dealing with a plethora of subjects, including abuse, child safety and spousal discord. He has resided in Passaic, NJ for almost thirty years, together with his Rebbetzen Yedhudis (nee Herzka). The Rav and Rebbetzen are blessed with many children and grandchildren.