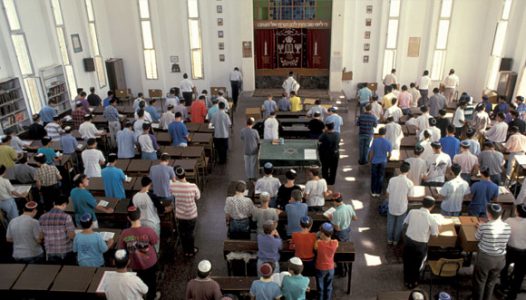 The following letter was written to our Mishpacha from the chashuva Rov (Rabbi Dovid Heber) of Khal Ahavas Yisroel-Tzemach Tzedek in Baltimore. Many who have read it have said that this is nothing short of amazing! A lesson as to how a seemingly simple but yet thoroughly thought-out work can have such a profound effect on someone’s life. A lesson as well, as to how a young person can take a seemingly simple piece of work and use it to the fullest to help him grow in the service of Hashem.

Our father, Harav Mayer Zelig Mann Zt”l, who composed the attached Mitzvah Chart, was in the Telz Yeshiva in Cleveland for approximately 60 years serving as a true eved Hashem. Throughout that time, he was a yedid nefesh of yb”l the Rosh HaYeshiva Harav Chaim Stein shlit”a.

He was world renowned for his heartfelt tfilos as the baal tfilah in Telz for the Yomim Noraim. He was recently niftar on daled Menachem Av, taking with and yet leaving behind for others, to learn from his superb qualities in Torah, Mitzvos and Maasim Tovim, bain adom l’Makom as well as bein adom l’chavairo.

Everyone is welcome, as well as encouraged to please email this to others and to hang up the Mitzvah Chart in Yeshivos, Day Schools and Shuls. May this act of harbotzas Torah u’Mitzvos, be a zchus for the aliya of the neshama of Horav Meyer Yitzchok Zelig ben h’kadosh R’ Shmuel Yaackov Zt”l.

Any stories, comments, questions or requests for copies should please be sent to eMann@ameritech.net . We would also appreciate confirmation as to who read this and studied the attached Mitzvah Chart.

My name is Dovid Heber. The email with your father’s chart was emailed to me by Reb Hillel Tendler – he received it from Dr. Yoel Jakobovitz. I am quite excited that after almost 30 years I now know the mechaber of this chart that had a major impact on me. I am sure you will appreciate the following story:

I grew up in St. Louis, MO where my father a”h was a Rebbi in the local day school for 27 years (we know the Zeffren mishpacha very well – I know Reb Shimon is related to you). When I was in 7th grade – two months before my Bar Mitzva, I traveled to Chicago for a cousin’s bris and to visit my brother in Telshe – Chicago. We spent Shabbos (Parshas Miketz the day after Chanuka 5737/1976) in West Rogers Park. On Shabbos we davened in Rabbi Rosenthal’s shul (California and Morse – the shul is no longer in existence, the building is now a Yeshiva) and I saw this davening chart hanging on the wall.

I am fascinated by numbers and was very excited by these calculations. When I came home, I ordered the chart and have kept it ever since. I cannot describe to you the roshem (impact) it made on me. This was the same time I began putting on Tefillin, a perfect time to begin being makpid (careful) on Tefila B’tzibur (praying with a minyan). I started making “standings” – keeping track each month of how many times I davened with a minyan. My father a”h attended minyanim and now I became more makpid to go with him and come on time.

There were not that many minyanim in St. Louis – I remember sometimes getting off the school bus in the winter in front of shul to run in and catch Maariv. When I went to Yeshiva the chart was matzil (saved) me from what unfortunately becomes a big nisayon (test) for bochurim – coming on time for davening. While some bochurim slept thru Shachris on Friday morning, the chart did not allow for such leniencies – even on Friday! During Bain Hazemanim (vacations) in St. Louis sometimes 6:30 Shachris was the only choice – but Bli Ayin Hara missing a minyan was a rarity. Of course there are times I’ve had to miss (e.g. when traveling – especially with early morning flights or when I go to small towns), but even when I travel I will go to great lengths to work around minyan times, if and when possible, and seek out minyanim in other communities.

One of my great frustrations is “just missing” a minyan. I was recently in California and found a Mincha and Maariv in a smaller community between points A and B – I was told Mincha/Maariv was 7:45 before shkia (sunset) – in reality Mincha was 7:30 and Maariv was at 7:45. I came at 7:40 and missed Mincha. I can’t tell you how upset I was – all because minyanim have become a part of me – thanks to this chart.

Today we live in a different world. With minyanim at many different times the challenges are less. I have a great thrill every time I go to a Shomer Shabbos Shul in Boro Park and see the list of minyanim. B”H my sons are zoche to be able to attend minyanim at many different times in Baltimore when they are home from Yeshiva. I always wondered who made this chart – and now after almost 30 years I am happy to have found out. My ahava for the Bais Haknesses comes from my father a”h (he was a chazzan) and my persistence to attend minyanim when not always so simple – thanks to this chart. I feel the “Shivti b’vais Hashem” (Dwelling in the House of G-d) has brought me Siyata Dishmaya (Heavenly assistance) at times I have needed it most.

May all the mitzvos performed thanks to this chart bring an aliya to your father’s neshama. I have quoted this chart in drashos and I will b’ez’H hang it up in our shul with the hope that it will mechazek (strengthen) other children and adults who see it. This is a true example of how a small idea can bear so much fruit.