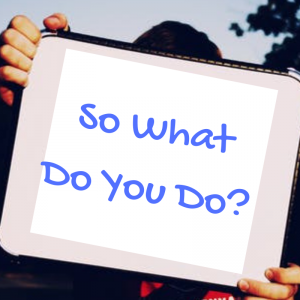 You’re at a simcha. You meet someone you don’t know. They ask you “…So what do you do?“

Answer one way and you will open a conversation that can lead to a new connection with new possibilities. Answer another way and it ends the conversation before it even really begins.

What do you say?

You could tell them you are “an executive director of xyz organization.” But that doesn’t open up a conversation. Often, it will have the exact opposite effect.

Your answer needs to get their attention.

– You do this by articulating the problem that you work to solve.

Imagine your response to the following scenario:

You meet someone at a simcha and ask him what he does for a living.

The principle is this: Start with a problem. Either weave it into what you do or say it clearly before you mention what you do.

“You may not be aware, but downtown Chicago has ten thousand completely unaffiliated Jewish young professionals. No Torah, Shabbos, No mitzvos. All are very high risk of intermarrying and being lost to the Jewish people.”

“It’s the organization that connects these young professionals to meaningful Jewish experiences so they are much more likely to marry Jewish and raise a Jewish family.”

Here is where you check your audience’s interest level and insert a call to action. Either let them ask you a follow up question. Or follow up with your own.

For example, “Are you someone who has a connection to the kiruv world?”

If you really want to shine, we can take this tool to the next level. To do this, I’d like to point out to you a subtle element in this exercise.

If you can define what you do by making yourself THE organization that does xyz, you will stand out. It lifts the attention level of the listener much more.

So instead of “I run a yeshiva,” find a way to change it to THE. Narrow your focus on who you serve.

BTW, in case you were wondering, “I’m the fundraising coach for busy Jewish leaders, who need a real system so they raise much more.”