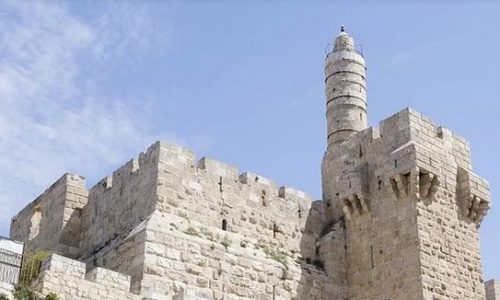 Rabbi Nachman Bulman z”tl beautifully describes the eternal connection of the Jewish people to Jerusalem in the Forward of David Rossoff’s, Where Heaven Touches Earth:

“Locations where Jews have lived since our Father Avraham’s time, have dotted the globe. But one Place remains central from beginning to end – Yerushalayim, the heartland of Hashem’s People. Its evocations are vast beyond words: Even Sheseeya (the Foundation Stone); at its center point, the alter where Yitzchak Avinu was bound; Yaakov’s ladder connecting Heaven and Earth; Dovid HaMelech’s lyre. Here Yeshaya and Yirmiya spoke; here our People “see and are seen” three times a year; here conquerors destroy but no one else rebuilds; here the Shechina remains, even after its withdrawal. From the endlessness of Exile, Jewish prayer breaks through all barriers to arrive here… The heart of our People trembles over the fate of Yerushalayim in fear and hope, such as no other People could ever know.”

It is in this spirit OlamiResources.com shares the resources below to teach the vital importance of Jerusalem in Judaism.

Jerusalem: Holiest City to Whom? by Rabbi Ken Spiro and J-TV

The Unique Relationship Between Hashem, Yerushalayim and the Jewish People by Rabbi Eliyahu Bergstein:  Part II, Part III (Part I, currently not available, is summarized at the beginning of Part II.)

Class & Source Sheets on the Meaning of Jerusalem for the Jewish People by Rabbi Dr. Nachum Amsel

The Value of Jerusalem & Heart of Israeli Soldiers by Rabbi Dr. Nachum Amsel (Includes some English translations to the Source Sheets on the Meaning of Jerusalem for the Jewish People above.)

Close Encounters of the Transcendent Kind: The Temple and the Sacrifices by Olami / NLE Morasha Syllabus

The Three Weeks and Tishah B’Av II: Why the Temple was Destroyed & How to Rebuild It by Olami / NLE Morasha Syllabus

Jerusalem is Not for Sale by Rabbi Mendel Weinbach

Praise and Prayer on Yom Yerushalayim  by Rabbi Dovid Miller

A Home for the Soul by Rabbi Ahron Lopiansky

Jerusalem, the Eye of the Universe by Rabbi Aryeh-Kaplan