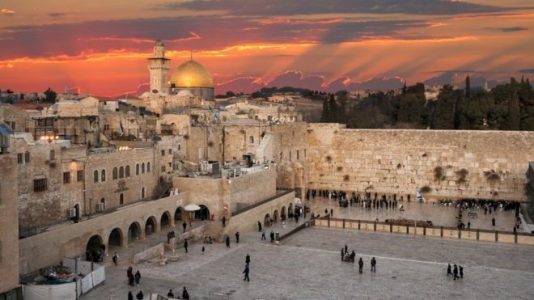 Most experts agree that the city of Jerusalem has no special strategic value or terrain that makes it a desirable location for an occupying army. Neither does Jerusalem possess many natural resources that would attract a large population to relocate there, nor is it located near any major waterway or trade route. Normally, one or more of these qualities is a pre-requisite for making a city a major center and an attractive place for people to live. And, yet, more wars have been fought to occupy or retain Jerusalem than any other city in history. Why? Without any physical advantages making this city special, why is it so desirable and important to so many people? What makes Jerusalem unique for nearly all the major religions?

But for the Jews, in contrast, Jerusalem is the center of their universe, their focal point. By understanding what Jerusalem means to the Jew and why, perhaps we may be able to discover an underlying paradigm and concepts for idyllic Jewish living and creating an ideal Jewish society.

IMPORTANCE OF JERUSALEM FOR JEWS

Each time a traditional Jew prays the central Amidah prayer anywhere in the world, three times daily, he or she is required by Jewish law to face Jerusalem. One of the nineteen blessings in that weekday Amidah or Shmoneh Esreh beseeches G-d to return to His city, Jerusalem, and reside there forever, and eventually rebuild the Temple. Every time a Jew recites the prayer of Grace following a meal, Jerusalem is the central focus of one of the four blessings, asking for G-d’s mercy upon the city and the rebuilding of the Temple. Even after eating a cookie or certain fruits or drinking wine, Jewish law requires a blessing that mentions Jerusalem. On the holiest day of the year, the Kohen Gadol — High Priest made a special blessing for the city of Jerusalem, which Jews today repeat every Shabbat, asking G-d for Mercy on the city because it is the source of our Jewish life. At a Jewish wedding, the Seven Blessings are an integral part of the ceremony. One of these blessings beseeches G-d to bring joy to the city of Jerusalem through the ingathering of Jews from all over the world.

While mentioning Jerusalem at times of his greatest joy, a Jew also must remind himself or herself that no joy can be complete and total as long as the city of Jerusalem lies bereft of its true spirituality and central jewel, the Temple. Thus, at the most joyous moment of marriage, a groom often places ashes upon his forehead as a symbol of mourning, and then a glass is broken, symbolizing the destruction of the Temple. Another great time of joy occurs when a person buys a home, usually the largest single purchase of a lifetime. Because of the mourning over Jerusalem, traditional Jews leave one small corner of the house barren, unpainted, indicating that life is incomplete as long as the Temple is in ruins.

Even in times of greatest sorrow, when mourning a relative, the city of Jerusalem is also prominently remembered. The traditional words of comfort one expresses to a mourner is “May G-d comfort you among the mourners of the city of Jerusalem,” equating the personal tragedy and loss with the national tragedy and loss of the Temple and Jerusalem. The rabbis tried to enact several additional laws that would remind a Jew each day about the status of Jerusalem, establishing daily mourning customs to remind Jews of life without the Temple, but these were never adopted en masse by the people. For example, the rabbis forbade eating meat and drinking wine (two primary rituals performed in the Temple) on any day in which a Jew visits Jerusalem in its destruction, without a rebuilt Temple. But when some rabbis also tried to ban wine and meat altogether for the same reason, this ban never was not enacted because this restriction would have been beyond the ability of the majority of Jews to observe. In the same passage, the rabbis legislated that a family should leave out one course of each cooked meal in remembrance of Jerusalem, and a woman should leave off one ornament of her numerous items of jewelry when dressing up, for the same reason. While these customs did not “take,” the practice of leaving approximately 1.8 square feet of the wall opposite the entrance to a house unfinished did become normative Jewish custom.