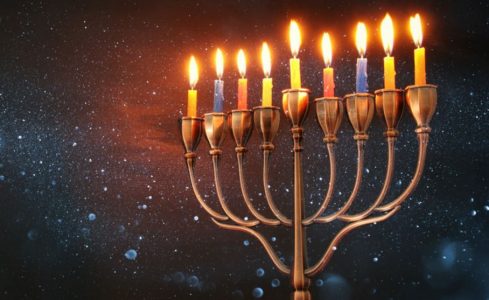 During the darkest days of the year in the Northern Hemisphere, when there are the fewest hours of daylight, the Jews bring light into the world both literally and figuratively. While other religions display many lights at this time of the year as well, these are not an integral part of the religious function of the holiday. And if a power outage were to occur, it is only the Jewish candles that would continue to burn brightly at night. In addition to publicizing the miracle and victory of the first rebellion in history on behalf of religious freedom, Chanukah and its customs contain many other concepts and moral ideas. What other Jewish values can be gleaned from the Jewish laws and customs of the holiday of Chanukah?

Every other Jewish holiday has its own Talmudic tractate to discuss its laws and customs, among the many other topics written therein. There is a separate tractate for Rosh Hashana, Yom Kippur, Sukkot and Passover. (Only Shavuot, a one-day holiday, does not have its own tractate. See the chapter about “Shavuot” for an explanation.) Even Purim, another rabbinically instituted holiday, has the tractate Megillah. Why is there no Chanukah tractate for this holiday?  Therefore, even though Chanukah, in general, seems to have a more minor role in Judaism, but, as will be shown, its messages are extensive as well as profound. Chanukah is discussed primarily in the tractate of Shabbat.

In the most famous Talmudic passage about Chanukah, the Gemara asks and discusses what is so special about the holiday that we are not allowed to have eulogies and that Jews are obligated to recite Hallel. It reads: “Mai Chanukah-What is [the reason for] Chanukah? The answer given is about the miracle of the oil to light the Menorah in the Temple, as there was only enough oil to light it for one night, but it lasted for eight nights.  The passage is familiar but it begs the question: If the question is indeed about the reason for instituting the holiday of Chanukah, as explained by Rashi on that passage, then the answer in the Talmud is quite strange. This passage highlights only the miracle of the oil lasting for eight days, while the miracle in the war that was fought by the Maccabees against the Syrian-Greeks is only mentioned tangentially, as merely creating the circumstances which allowed the miracle of the oil to occur. It seems as if the rabbis of the Talmud were intentionally distancing themselves from the miraculous Jewish victory in that war. But, as we know from the special prayer of Chanukah, Al Hanisim, the emphasis there is just the opposite. The great miracle Jews mention in that prayer is only about the war against the Syrian-Greeks, and the oil is mentioned peripherally.

This question is best expressed by the Maharal. He asks: Was it really because of the miracle of the oil that the Rabbis established the holiday of Chanukah? We know that a Jewish holiday is only established for a miracle that happened for the Jewish people, and not because of a miracle that allowed someone to do a mitzvah-commandment, such as lighting the Menorah in the Temple. (If, for example, a Jew is prevented from eating or could not eat matzah on one day of Passover and now he or she can fulfill this mitzvah, there is no Jewish law that now creates a separate holiday or reason to recite the special Hallel prayer). Thus, how could the Talmud say that the holiday and the Hallel prayer were established because of the miracle of the oil?