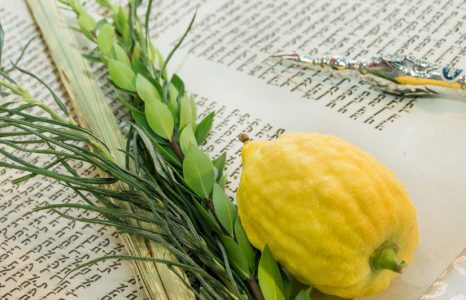 Each holiday in the Jewish calendar has its own unique personality, based on the laws, customs and other aspects of the holiday. These also teach us specific Jewish values, the Jewish outlook on life and the morals and ethics to live by not only for this holiday, but the rest of the year as well. Sukkot, for example, is the holiday of simcha-joy, as the command to be joyous on this holiday appears more in the Torah than for any other holiday. (For a discussion of what is signified by “joy,” see the chapter on “Happiness.”) What are the other special commandments and customs of Sukkot, and what do they, with all their details, teach the Jewish people about the values of this holiday and Judaism, in general?

THE HOLIDAY WITH DOUBLE THE COMMANDMENTS – ANY CONNECTION?

Every other major Jewish holiday in the Torah has one and only one major positive commandment. On Pesach, it is to eat matzah. On Rosh Hashana it is to blow the Shofar. On Yom Kippur, it is to fast and deny bodily pleasures. But only on Sukkot did G-d give the Jewish people two equally dominant commandments to do: to sit or live in the sukkah for seven days, and also to take the Four Species (etrog-citron, lulav-palm, hadasim-myrtles and aravot-willows) and then hold and/or shake them together. Why only on Sukkot were the Jewish people given two special Torah commandments? In addition, is there any connection between these two seemingly diverse activities?

While there is an overall concept in Judaism of Jewish unity, we will show that both of these commandments stress the importance of the unity of the Jewish people. Most of the 613 commandments are performed by Jews as individuals. Even when a family eats the matzah together on Passover, they do so as individuals, as there is nothing shared about the eating. But the mitzvah to sit in the sukkah, by definition, is a shared experience. The commandment must take place in one closed environment, a hut built outside the home where the actual commandment is to live and do all of one’s activities, but most traditional Jews simply eat all meals in the sukkah. The sitting together is the commandment itself. This idea of Jewish unity is reflected in the sources. The Torah commandment to sit in the sukkah includes all Jews (kol-all citizens). The Talmud extends beyond the simple meaning of this verse and says that the ideal is for all Jews in the entire world to sit together in one large sukkah. The ultimate symbol of unity, the Temple in Jerusalem, is also called a “Fallen Sukkah” in the special insert added to this holiday in the Grace After Meals blessing.

The concept of sukkah is also that which brings peace in general, and between Jews in particular. Every Friday night, Jews request from G-d to bring “the sukkah of Your peace upon us” and then repeat the phrase “sukkah of peace” at the end of the blessing. One modern commentary differentiates between the type of teshuva-repentance achieved five days earlier on Yom Kippur in synagogue, and another kind of teshuva-repentance that the Jewish people achieve on Sukkot as they sit together in the sukkah of peace. Therefore, it is one of the special powers of the sukkah to unite the entire Jewish nation.

The other major commandment of the holiday of Sukkot proclaims the same message. There are four separate species. On Passover, there are also six items on the Seder plate. But there, each item remains separate. On Sukkot, however, a Jew cannot fulfill the commandment unless one unites all four different species together as one entity. Moreover, if one of the four species is absent, the mitzvah-commandment is not fulfilled. What is the specific symbol of these four species? Among the many explanations, each one of the species represents one of the four kinds of Jews. The arava-willow, with no smell or fruit, symbolizes the Jew bereft of Jewish learning and commandments. The etrog-citron, which has both smell and fruit, represents the Jew who has both Torah learning and mitzvot-commandments. The lulav-palm branch has only fruit (dates), symbolizing those who perform commandments, and the hadas-myrtle, with only a scent, stands those Jews who learn Torah. Thus, all kinds of Jews must unite symbolically in order to fulfill this commandment. Therefore, both of the Torah commandments of the holiday of Sukkot promote and teach the Jewish people the importance of Jewish unity.