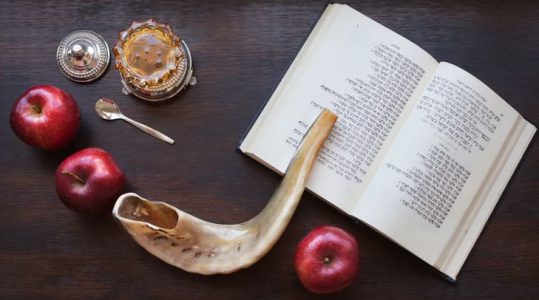 On Rosh Hashana, the Jewish New Year, the atmosphere and mood is quite different from the revelry of the secular New Year. This chapter will explore why and how this is so, through the unique customs and commandments related to the day, as well as its historical significance. Rather than examine the laws and customs themselves, the purpose here is to understand the deeper concepts and underlying values of these laws.

THE UNIQUE SHOFAR OF THE MONTH OF ELUL

Even though the Torah’s commandment is to blow the shofar only on Rosh Hashana, the first day of the month of Tishrei, it is an almost universal custom in Judaism to blow the shofar, in addition, each day after  morning prayers during the entire month of Elul for a full thirty days prior to Rosh Hashana. Why? Many people probably think that the reason is that the shofar blower has to practice in order to “get it right” on Rosh Hashana. But there is no other mitzvah where the custom is to “practice” that commandment, as part of Jewish law and custom, before we actually perform it on its proper day. So, for example, there is no commandment before Sukkot to shake the lulav and four species or practice sitting in the sukkah, or light the candles a month before Chanukah or perform any other ritual in Jewish law simply in order to perfect the action. In fact, adding days to the performance of a Torah commandment is specifically forbidden. In addition, when it comes to matzah, it is strictly forbidden to eat matzah before the Pesach Seder, before the mitzvah to do it, and some Jews stop eating all special foods for the Seder on the day before Pesach, while others do not eat matzah at all for a month before Passover. Why, then, is shofar the only mitzvah in the Torah that we have to seemingly “practice” day after day for an entire month before Jews actually perform the Torah commandment?

According to Tur, the shofar of the month of Elul has nothing to do with the commandment to blow shofar on Rosh Hashana. Quoting the Midrash, Tur states that Moses was  asked by G-d to go up to Mount Sinai to beg for forgiveness on behalf of the people and write the second set of Tablets after he smashed the first ones in reaction to the grave sin of the Golden Calf. In order that no one should repeat the same mistake about mistiming the return of Moses, which caused the sin of the Golden Calf in the first place, they blew a shofar in the camp, indicating exactly when Moses left to go up to the mountain for the next forty days. The Tur continues and says that G-d Himself was uplifted by that shofar on the first day of Elul, citing the same verse that we say concerning the shofar of Rosh Hashana.  Tur then says, based on the verse that the shofar awakens feelings in people, that the sound of the shofar should awaken within Jews the desire to repent for their sins (and confuse Satan), which is the very reason Jews blow shofar on Rosh Hashana. We understand that since there were no newspapers, radio or even posters to announce Moshe’s leaving, the shofar served that purpose. Thus, the shofar on the first day of Elul was just a horn, a signal to the people and nothing more. Any other signal would have been just as effective. Why, then, the special custom to imitate the signal and blow shofar on the first of Elul each year today?  But even if we could answer this question, this would only explain why we blow shofar the first day of Elul, as they did in the desert. But why do we continue to blow for an entire month? So we are back to our original question: why start and practice a Torah commandment 29 days before the day of the actual commandment?

Beit Yosef, a commentary on Tur (and author of the Shulchan Aruch) asks these questions, and then says that the shofar of the first day of Elul was to prevent further sin (regarding the Golden Calf incident), while the shofar for the rest of the month is blown to inspire repentance for past sins. Thus, the two shofar blowings during the month of the Elul have two separate purposes: one to cause repentance for the past and another to prevent sin for the future. Both of these components are needed in true repentance. But this does not actually answer our question about why we do all this before the day which is the specifically mandated day for repentance, Rosh Hashana.

Furthermore, we know that the sound of the shofar causes both a physical reaction in people as well as a spiritual wake up call to repent for past misdeeds. But how can the shofar blast prevent future sins? What is the “magic” in the sound that can prevent the Jew from future sinning, according to Beit Yosef? In order to answer these questions, we need to examine the specific commandments of the shofar and its blessing, and in this way discover its uniqueness.