OLAMI Resources   /   Featured Posts   /   Learning about Ourselves from the Avos 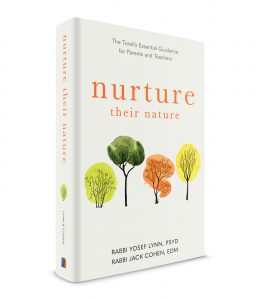 Olami Resources is happy to present the third in a series of free installments featuring Rabbi Dr. Yosef Lynn’s and Rabbi Jack Cohen’s important new book, Nurture Their Nature. Rabbi Lynn serves asMashgiach at Machon Yaakov, Jerusalem and Rabbi Cohen is Director of Education for OLAMI, North America. The sefer is predominantly a synthesis of Rabbi Beryl Gershenfeld’s Torah on individuality and self-esteem in Jewish education.

This week we are featuring Chapter 11, Learning about Ourselves from the Avos. Over the next few weeks, we will publish one additional chapter. Our sincere thanks to the authors for sharing their publication with the rabbis and educators subscribed to OlamiResources.com. Purchase a copy of Nurture Their Nature.

Learning about Ourselves from the Avos

Let’s spend time together studying in more detail the three root spiritual strengths as explained by Rav Dessler. Understanding these three profound perspectives will help us understand what makes us unique in the deepest of ways:

This opens for us a great gateway into the paths of the pure avodas Hashem. [1] We will now proceed to explain it, with the help of Hashem.

There are three fundamental powers found within a person, through which one can reach the ultimate good. Each one differs from the other in its root and character. These strengths are:

1. Chessed — through it man places his primary interest in others and tries to do good for others and influence them. Elsewhere [in “Discourse on Loving- Kindness”] we called Chessed the “power of giving.”

2. Yiras Shamayim — in contrast to Chessed whose main focus is outward, [yiras Shamayim is a trait through which] man turns inward into himself in his concern for the consequences of his actions.

3. Emes — the power of demanding the truth clarifies the correct path in avodas Hashem without veering right or left — either toward the side of excessive Chessed [and giving too much or in an inappropriate way], or toward the side of [yiras Shamayim with] excessive self- criticism [that brings one to a spiritual standstill], [ultimately] diminishing the good deeds one can perform …

We normally find that the unique nature of a person is based principally on one of these three primary traits mentioned above. Generally, one of these three traits creates in him his unique personal spiritual nature through which all of his thoughts and actions are influenced and directed.

In our work with students, we have found this framework to be tremendously powerful. Of course, Rav Dessler presents it in a highly simplified form, but this is precisely why it is useful. Amid the many facets of our personalities, it helps us focus on what is at the root of who we are, revealing an elegance of understanding that we would not have thought to be possible until we discover it for ourselves.

Rav Dessler writes that even though all three traits of the Avos are found in every person, one of the three functions is the root motivator inside of each person, while the other two traits are secondary to it. [2] All of Hashem’s values are implanted in every person, but one of them is the essential value through which the others are measured. [3] For example, one whose essential motivator is kindness certainly may value discipline and truth, but instead of discipline and truth being motivators, they

provide the person with the ability to help others in a more organized and honest way. Ultimately, one’s primary trait shines through.

Continue reading Learning about Ourselves from the Avos.

Read Chapter 10, Drawing from Our Deepest Source of Strength.

Read the Introduction to Nurture Their Nature.

Purchase a copy of Nurture Their Nature.

[1] Rav Gershenfeld explains that Rav Dessler emphasized the word “טהורה — pure” so people would not suspect that these ideas were derived from twentieth-century psychology. This discourse was given over in Gateshead, England, in 1943. Even then, he wanted people to appreciate the authenticity of these defining ideas of what life is about.

[2] For simplicity, we only quoted part of Rav Dessler’s essay, but he actually fleshes out this point. He illustrates with the following example: One person can feel a deep drive to do chessed but always seeks to do it in a truthful way, whereas another person’s drive for truth brings him to want to share that truth with others, effectively becoming a giving person, but driven primarily by truth. The first person’s root motivation is Chessed, whereas the second person’s root motivation is Emes. Of course, Avraham was also motivated by a deep yiras Shamayim, but when the verse in Michah says that Hashem “[gave] Chessed to Avraham,” it reveals that Chessed was his deepest middah — the root motivation implanted in him by Hashem.

This actually helps us appreciate the chiddush of Hashem declaring after Akeidas Yitzchak, “Now I know that you are a yirei Elokim in that you did not withhold your son — your only [son] — from Me” (Bereishis 22:12). Hashem was communicating to Avraham, “Now that you’ve gone to the nth degree to fulfill My Will, against the grain of your middah of Chessed, I can say that you have developed a true yiras Hashem that is real, even while it is rooted in your root middah of Chessed” (Rav Dessler, ibid.).

[3] The word for character trait, “middah,” literally means “measurement.” In part, it is for this reason: our middos become the vessels through which we measure and value other things. Our primary middah is therefore the middah through which the value of our other middos is measured.