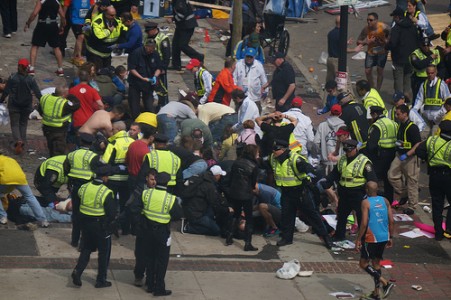 Israelis know from their horrible experiences with terrorism that “three dead” is only one part of a story of lost limbs, suffering— individual and national tragedy. The targeting of innocent runners and bystanders on Patriots’ Day seems calculated to inflict not just maximum casualties, but to wound the soul of America.

We should feel hate towards the perpetrator.  We should hate evil and those who are its torch-bearers.  “He who is kind to the cruel will end up being cruel to the kind”, was the pithy observation of the Talmudic rabbis. This person has not committed one evil but a few hundred evils.  There will be a thousand and one nights of people in pain—of mourning families, those who lost limbs and those who “only” got shrapnel shooting through their bodies.

A country will change because of him (or them).  Millions will be more scared; billions more will be spent on security. The tragic litany of pain will be so disproportionate—a single man (possibly) and a few thousand dollars affecting thousands directly and a few hundred million indirectly forever. Such is the easy destruction of evil—it can pull the carefully built house of civilization down from any angle.  A thousand years of building all vaporized by one Kim Il Sung’s madness;  an entire civilization attacked by a new ideology of insanity—Nazism, Communism, Muslim fundamentalism—or just the madness of one lonely person living in the mountains. We are comforted by the fact of their madness: They kill senselessly. Therefore they are mad. And that is why they kill.

But it is not so. The Holocaust showed how hundreds of thousands of ordinary Germans could become animal killers. So did Rwanda, so did the Cultural Revolution in China. We are surely now on the side of Thomas Hobbes who stated that, left to his own devices (without the restraint of the state) the life of man would be “nasty, brutish and short”.  The Torah Sages knew this 1600 years before when they state in Ethics of our Fathers: Pray for the welfare of the state, for if not for it, a man will swallow his neighbor whole.”

It is never easy to get into the mind of a truly evil person. Hannah Arendt tried to do so at the Eichmann trial in Jerusalem (1961). Her “banality of evil”—that the evil person is essentially mundane, is hotly discussed to this day.  The word “senseless” will surely be used many times over the next few weeks.

We will say that we will come out stronger; but will we come out more moral? We will rage on and speak bravely of bringing to justice the perpetrators. But will we produce a new plan so that civilization produces more goodness and less evil?  We need to destroy evil by fighting it but also by modeling the alternative. We need to show the world that ordinary man is capable of being exceptional in his kindness, in his honesty, in his moral and spiritual stature.

Judaism has a vision of man for the future. I believe in that vision; and it is from there that I draw my optimism about the inherent potential of man to be good. This should not be confused with naiveté.  We cannot simply reach out and hug our enemies and think that they will respond to our love and become good. We should remember that as we add another day of infamy to our calendars.  (Actually, Monday was already Israel Memorial Day, when Israelis remember their dead at the hands of those who would see us all dead.) And in remembering—and trying to feel the cauldron of suffering and pain that was inflicted—we should draw on our God-given inner souls and reach heights of human glory that had never before dreamed of!