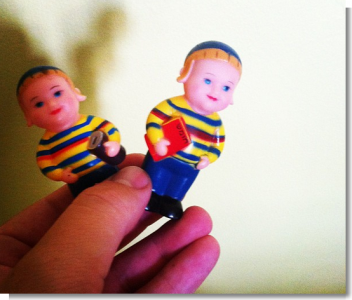 Suddenly, when I was first thrust into the heartland of BT country, Passaic-I had to learn a whole new lexicon.

Jews were now divided between FFBs and BTs. (I am loathing to decipher these acronyms, for by doing so I am disseminating and there by encouraging their usage. Nevertheless, FFB is “Frum From Birth” and BT is “Baal Teshuva” or a ‘born again’ Jew.)

However, as strange and somewhat disdainful, these labels were to me, one new phrase really irked me. The particular expression I am referring to is the way many BTs (and even some FFBs) reference those of our brethren who were not outwardly observant. The phrase they adorned them with is ‘not-yet-frum-Jews’.

At first my need to fit in and not to seem any less ‘frum’ than my peers (and certainly never wanting to convey the impression that the Mitzvah which trumps all other Mitzvohs; the Mitzvah which prompts Challahs to be baked and wallets to be emptied, namely ‘kiruv,’ was not paramount in my mindset), I too began to use this term proudly.

Immediately, my ninety year old cousin from Texas who never put on Tefillin in his life and has had no contact with a Jew in 69 years had overnight become a ‘not-yet-Frum-Jew’.

With a little imagination I could even engage in a little one-upmanship with my BT neighbor. Why stop with just being a ‘not-yet-Frum- Jew’; I began to refer to my cousin as my ‘not-yet-Gadol HaDor-cousin’! This was great. Instantly, no one had any more ‘non-religious’ relatives of friends; we only have ‘not-yet-frum’ relatives and friends.

However, although the phrase is still widely used by many, I have excised it from my lexicon.
Why? Why not join the flow?

First of all, it is not true.

Where does it say that everyone will become Frum in our lifetime?

Yes, perhaps in the Messianic time the recognition of Hashem will be clearer than now which will cause many (although perhaps not all) to return to Hashem.

However, if what we really mean when we refer to our brethren as ‘not-yet-frum’ is an expression of the hope that when the Messiah arrives everyone will return, then why just refer to non-frum-Jews as ‘not-yet-frum’? How about referring to our deceased relatives as ‘not-yet-resurrected-Jews’?!

Can you imagine that? We will stop saying, “My dear departed father” and instead say, “My not-yet-resurrected father”.

And if you contend that the phrase ‘not-yet-frum’ conveys our belief that ‘in this world’ through ‘kiruv’ everyone can return and you are just being optimistic; well statistically it is just not accurate.

The fact of the matter is that precluding a jolting jarring dose of divine intervention, most ‘not-yet-frum-Jews’ are going to remain ‘not’. Sad? Perhaps; however, realistic it is. However, there is an even greater and more compelling reason why I have removed it from my vocabulary.

It is condescending and arrogant and I cannot believe that anyone who hears you refer to them as such would get the ‘warm and fuzzies’. Would anyone of ‘us’ feel good if we found out that Satmar Chassidim refer to us as ‘not-yet-Satmar’? Would you appreciate it if a Modern Orthodox Jew (whatever that is) would refer to you as: “My not-yet-Modern Orthodox” Chareidi cousin?
None of us would be happy if a member of another religion would refer to Jews as ‘not-yet-Christians or Moslems?’

Please forgive the analogy; however, this reference is outright patronizing and by using the phrase, we are disparaging our fellow Jews and their life-choices. Irrespective of the truth of your position, it is hard to imagine that the object of your phrase would be very receptive to your overtures of ‘kiruv’ when it is obvious to them that you are disdainful of their lifestyle and discredit their life choices.

We all have the responsibility and obligation to help and assist those Jews who are in need of assistance.

We must assist them in their material and spiritual needs. However, we also have an obligation to be respectful of them and legitimize them as people. It is a challenge to thread the needle properly. On one hand, we want to share the spiritual riches we have discovered and benefit from. On the other hand, we must avoid the pitfall of denigrating and being dismissive of our fellow Jews It is a challenging. However, the phrase ‘not-yet-frum’ should be discontinued as an idiomatic expression, as it is much closer to being an expression of idiocy.