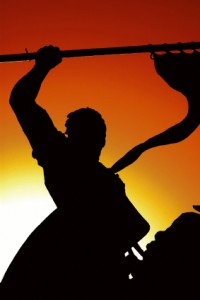 As a leader, you know that leadership offers great opportunities to guide and inspire others, to set the agenda and see it to fruition. However, it also can place us in compromised situations, where we feel as if we have lost control of the situation around us and need to engage in damage control.

There are even times when we step into a leadership role that did not previously exist in order to address a need, a problem or a concern, oftentimes a pressing one at that. Such was the case of Mattisyahu, the elderly Kohen who assumed an expanded leadership role at a time of great national duress in order to save his nation and the Torah that they treasured.

This essay and the one that will follow assume that you are familiar with the general history of Chanukah. (For those seeking a refresher, please click here and then here for a concise summary.)

In this article, we will aim to distill leadership lessons from within the broader historical context, lessons that we can apply within our own lines of work and our lives in general.

Mattisyahu and his sons had no interest in attacking the Seleucid forces. They had fled to Modiin, a small hamlet on the outskirts of Yerushalayim, because they knew that it would give them a better opportunity to live a Torah lifestyle than in the now-Hellenized capital. Knowing what was of primary importance to them is what drove their decision to relocate as well as all of their subsequent ones. It was also captured in the family surname, Maccabee, which formed their raison d’etre, “Mi Kamocha B’Eilim, Hashem?” (who is like you amongst the mighty ones, O God?)

As leaders, we also need to know what’s most imperative and be willing to take the proper steps in order to achieve it. Clarity of purpose, as well the ability to visualize and articulate what success looks like, are two primary characteristics of successful leaders. While most decisions may not be of the “life or death” variety, we still need to establish guidelines that inform the moral, financial, retention-related, and other decisions that we must make.

The takeaway for leaders is plain. Evaluate your circumstance. Identify potential threats and challenges and act as proactively as possible to thwart them. On the positive side, leaders need to recognize their core purpose and remain as focused as possible on advancing that cause. Too often, we get distracted by competing objectives or peripheral interests and fail to invest sufficient energy on what’s really important. Staying above the fray and remaining attentive to your primary goals can make all the difference between achievement and failure.