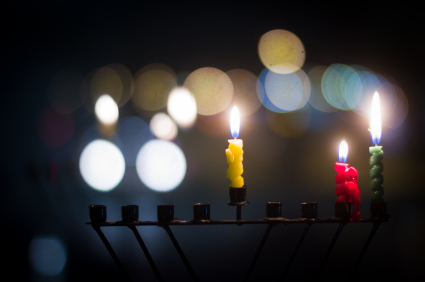 Hanukkah celebrates the miraculous military and spiritual victory orchestrated by a handful of poorly trained and inadequately equipped Hasmonean fighters over the superior Seleucid (Greek) forces of Antiochus IV. The Jewish leader, Judah Maccabee, son of Mathias, had risen in opposition to the Hellenic kulturkampf that had been waged against his people. He led his band of brave, selfless fighters into battle after battle against increasingly stronger foes until he was able to liberate the Jerusalem Temple and the area that surrounded it.

Judah’s wins occurred against all odds. Every military prognosticator of the day had drawn the same conclusion: the guerilla attacks of his bands of neophyte soldiers could not be sustained successfully against wave after wave of Seleucid attack. But indeed that is what happened. While the primary credit for this victory can be attributed to Divine assistance, the victory could not have occurred without the bravery and commitment of the Jewish fighters and their leader.

While the stakes for most business and organizational leaders are far lower than they were for Judah, there are many situations in which marketplace or boardroom victory seems as remote as it did in the Judean caves of the second century BCE. As leaders, we often face circumstances, such as market conditions, lack of funding, or the absence of internal support, that threaten to derail us. We want to persist anyway but recognize the uphill challenges that we will be facing under such circumstances.

What can leaders do to inspire themselves and their people to persevere with their dreams when the odds are stacked against them?

1. Get a heavy dose of cold water – Leaders who want to succeed when others tell them that success isn’t possible would do well to do some honest soul-searching. What are the challenges that everyone is talking about? Why are so many predicting your failure? Am I personally biased or do I really have something special here? If, despite their contrarian arguments you feel that the goal is attainable and you can win, then go for it with everything that you’ve got.

When I left my last position as head of school, I debated back and forth as to whether I should pursue a new principalship or try my luck in the coaching arena. In the end I decided that I really wanted to and parlay my experience and past successes in delivering high-impact trainings. But there were very few people who had done this successfully and so I got on the horn with as many people as I could to figure out why others either hadn’t tried or hadn’t succeeded. After determining that I had a blueprint for a successful foray I committed to my current path and have never looked back.

2. Laser in on the end result – It’s nearly impossible to get anything meaningful done, especially in the face of opposition, unless you get clarity on what it is that you’re trying to accomplish. What outcome are you reaching for? What customer problem will you solve? The clearer that you can be in creating a vivid, detailed vision with an unmistakable, measurable outcome, the more that you and your team will be able to focus their skills and energies on the task at hand even when others haven’t bought in.

3. Become a breakthrough leader – In leading breakthrough change, we must first convince others that our proposed change has a positive, necessary and urgent purpose. Strong leaders understand the human dynamic at play within their organizations and know how to push the right buttons to get their people to buy-in and perform optimally. They also find ways to build upon successes without letting people become too giddy or comfortable and to not let morale drop too low when things aren’t going according to plan.

Casey Stengel, the late Yankees skipper and perhaps the most successful manager in MLB history, would ride his players when they were on a win streak. He would pick on little things players were doing. By doing so he would refuse to let them be complacent. When the team was losing, he would become more nurturing. He would not want them to lose heart so he would boost their confidence.

4. Develop a no-fail attitude – A no-fail attitude is a mindset that says that while you recognize the challenges, you’re going to win, no matter what. Make sure that this mindset is deeply entrenched in your own mind and in the minds of those in your inner circle.

In June 2002, Elon Musk founded SpaceX, with an objective to lower space transportation costs and make Mars colonization a reality. Musk invested a lot of money which he earned from the sale of PayPal into SpaceX. The company’s first three launches failed which sparked skepticism in many investors. They only had enough money for one more launch; they were almost at the verge of bankruptcy. It was a very stressful time for Musk, but he was as determined as ever to make it work. Failure was simply not an option. The fourth launch was a huge success, and as a consequence SpaceX received a contract from NASA for $1.6 billion.

5. Plan ahead for barriers – Do your best to project what challenges (known or unknown) may lie ahead. One way to do this is through the use of a SWOT Analysis. Have a candid conversation with your team about your strengths, weaknesses, opportunities and threats, particularly in regard to your current initiative. Pay particular attention to the threats and see what can be done to mitigate if not eliminate them before they derail your efforts.

7. Learn how to manage change – Strong leaders overcome obstacles, failures, and mistakes by persevering, adapting, and emerging with more knowledge, insight and resolve. That means that whatever the challenge of the day, leaders have confidence in their own abilities to figure it out. They are ready for more.

Other recommendations to consider: