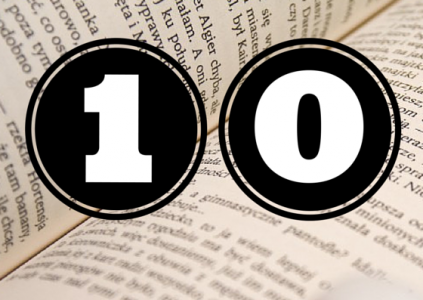 Heart of Darkness is a novel about Belgium’s colonial rule in the Congo. The colonialist conquered with his sense of bringing civilization to the savages of Africa. But Conrad shows that much of this was merely an overlay of culture, lacking true moral depth. In some ways, the cannibals of the Congo jungle displayed character that was far superior to the Belgians who, once stripped of their gleaming white Europe, showed who the real savages might be. This book allowed me to understand how the Germans could become the Nazis, how the French managed to kill 40,000 of their own in the French revolution aftermath, and dozens of other situations – many of them personal.

One of the best-written books for laymen on modern science, even if it is not the most recent. This book (and others by Paul Davies likeThe Cosmic Blueprint and God and the New Physics) introduced me into the wonders of quantum physics (in particular) and led me to the revelation of how science is drawing closer to Torah over time.

This densely textured history book shows that there is nothing magical about why the West was the civilization of the last 400 years and why it overtook the Chinese and the Moslems. There are just a ton of interesting perspectives in this book, including the sobering thought that the West seems to have now lost belief in its own values.

After reading tens of management books after this one, The One Minute Manager is still the one that gave me a big boost in being a better person as a manager resulting in happier and more productive staff. A close second to this book is Stephen Covey’sThe 7 Habits of Highly Effective People. The thrust of this new genre of book was that there really is a correlation between good character and organizational well-being and hence productivity. It was a move away from the brilliant brutality of Jack Welch (of GE – generally regarded as the best CEO of the 20th Century) and the manipulative underpinnings of Dale Carnegie’s How to Win Friends and Influence People.

Frankl (in this book and in Man’s Search for Meaning) asserted that survival in the Nazi camps was not a function of physical strength but rather a reflection on whether the person could find meaning in his situation. He asserted that the search for meaning is a universal, primal need, and that much of our anguish comes from lacking sufficient meaning in our lives. In his The Unconscious God, Frankl talks of the search for ultimate meaning, for God.

Kuhn showed how even the best of scientists (and so much more others) are subject to only asking questions within the accepted paradigm and are therefore reduced to solving  riddles rather than real questions. He explains why this led to science progressing very little over long periods until a young (and hence not fully trained in the paradigm) scientist came along and saw things from the outside. It is easy to apply Kuhn’s ideas to other areas of life and recognize the paradigm within which a person is operating and hence why they are processing information in a certain way. This has allowed me to get into other people’s head-space, understand why they are thinking as they do, and translate what I am saying in terms that are meaningful for them.  A modern corollary to Kuhn’s work is Thinking Fast and Slow by Daniel Kahneman.This is an amazing book which peels off the layers of how our thinking is influenced by all kinds of messages – subtle and unsubtle – around us. It is a sobering reflection on how the best of us are unwitting subjects to the manipulations, intended or not, of our environment on a constant basis.

R.D. Laing has a unique approach to schizophrenia.   According to him, the schizophrenic is having a reasonable response to an impossible environment. Although we know a lot more today about the chemical aspects of such conditions, Laing helped me to humanize the people with mental illnesses – to understand that these are not some kind of sub-human beasts, but rather people who have created a framework (whether consciously or not) for dealing with a life that is uniquely and humanly theirs.  I have been able to extend that sensitivity to many other situations.

This book details what is known as the anthropic principle:

A: The cosmos is uniquely fit for life (the weak anthropic principle).

B: The primary goal of the cosmos is mankind, i.e. the cosmos is uniquely fit for only one type of advanced intelligent being, Homo Sapiens (the strong anthropic principle).

What was amazing for me was to see how the multiple properties of any substance are all prescribed so that they work very precisely to contribute to the overall effect and that the slightest change in this would be disastrous.

Written in the late 80s, much of what Bloom had to say about American society in general, and its universities in particular, is relevant today. Bloom’s book is full of deep insights into contemporary liberalism, music, feminism and the lack of thoughtfulness and tradition in higher education.