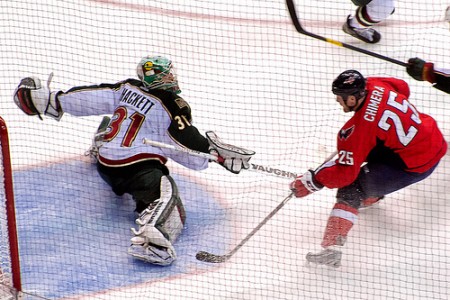 Of the four major professional team sports played in the United States (baseball, basketball, football, and hockey), hockey is the least popular.

Ratings and attendance figures at hockey games lag behind the other three sports (not to mention some college sports and even racing), as do media coverage, broadcasting deals, merchandise sales, and, consequently, player salaries.

While hockey may not garner the same attention as the other sports, I believe that when it comes to leadership, it has the most to offer, at least symbolically. The following is a partial list of leadership qualities that I have gleaned from observing how the game is played.

1) Balance and skill – Unlike games that are played on sure, foot-friendly surfaces, hockey is played on an unforgiving sheet of ice. A wrong move or a loss of balance can easily result in a hard, embarrassing fall or crash into the boards. Moreover, in order to succeed in the NHL, players must be able to skate well (backwards as well as forwards) at fast speeds while also handling a small puck with a long stick. No other sport consistently demands that level of skill and coordination from all of its players. Leaders, too, need to exercise great care and skill in their oft-perilous positions. The hazards can be real, and a misstep can easily result in a hard fall. They must maintain their balance, build speed and hit their goals as they avoid the oncoming rush. And they often must do so with equipment (or personnel) that may not be optimal for pushing the objective reliably in the right direction.

2) Staying in line – In contrast to the individual substitutions that are characteristic of most sports, hockey players play on lines, entering and exiting the ice in groups. They work together to advance the puck and are responsible for each other at all times. This accentuates the importance of teamwork, a crucial skill for all leaders. As much as leadership authors and business journalists extol the qualities of great leaders, leaders know that they are part of a team that works well together to achieve a common goal. As with hockey lines, there may be a clear leader and perhaps a superstar in the group. But even he needs the support and effectiveness of his line mates to ensure a successful shift.

3) Picking up the slack – Hockey is the only sport amongst the Big 4 in which one team will play with a man advantage for multiple minutes at a time. This is called a power play, and it occurs following a penalty (the penalized player must sit in a designated penalty box). During a power play, the shorthanded team shifts into defense mode, hunkering down to “kill” the time until their teammate is able to rejoin them. Leaders, too, often face situations of challenge when they must make up for someone’s absence or shortcomings, or simply deal with unexpected shortfalls. They need to pull everyone on their team together and survive the present before they can focus on thriving in the future. This requires much focus and discipline, as well as an awareness of when the time has arrived for them to shift focus and assume a more aggressive, offensive posture.

4) Putting themselves on the line – One of the hardest and least glamorous parts of playing hockey is blocking opponents’ shots. Putting your body in front of a fast moving puck can be scary and painful, yet hockey players routinely do so. They recognize that their goaltender is the last line of defense, but that they need to do whatever they can to make sure that the shot never gets on goal to begin with. Executives may have people that they rely on to “save” them in certain situations, like their HR or IT people, their legal team, their administrators, or perhaps their executive coach. But they know that it is their job to set policy and maintain high standards of practice throughout the organization that will “block” such scenarios and keep “save” situations to a minimum.

5) Celebrating in style – Hockey goal celebrations are as low-key as they come in professional sports. There’s no dancing, no gyrations, no self-adulation, no spiking, no flipping, etc. Instead, the scoring team collects around the scorer for a quick huddle and celebration before they head to the bench to “high five” their teammates. Strong, humble leaders know that it’s ultimately about the team, not their personal successes. They are comfortable enough in their own skin as to deflect attention elsewhere and make celebrations collective in nature.

6) Shifting momentum – Hockey games lend themselves to certain hard-nosed plays. Some players are deliberately physical, knowing that a good check or even a fight can shift momentum in their team’s direction. While no one would condone fighting in the workplace, successful leaders know to rally and energize their people and lead them along a path of focused productivity even when things haven’t been going quite their way. They are momentum builders and cheerleaders, using their energy, passion, beliefs, and confidence in others to motivate their teams to higher levels.

A well-played hockey game is about as captivating and impressive a spectacle as exists in team sports. The action is non-stop, with much skilled movement and few prolonged breaks.

The game presents a continued flow of drama as men hurl themselves at a small rubber puck and at each other in order to tally elusive goals. While the focus may be on lighting the lamp, there is much that can be gleaned from this “humble” sport that will serve leaders well in their own championship quest.