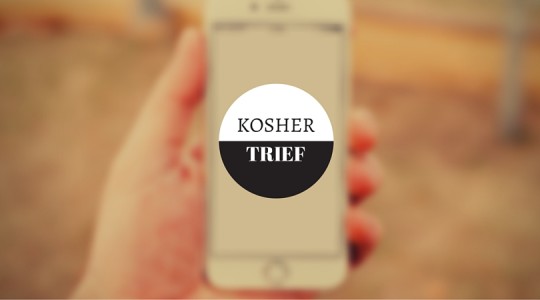 Disclaimer: Please note the following is written in jest and is in no way meant to mock any person or group. That being said, almost every day I see ‘chashuva people’ speaking on their phones while driving. I myself can always use the chizuk to make sure I am properly ‘aligned.’ Therefore, if the only person who takes a lesson from this piece is me, I will be more than satisfied.

As the Suburban sped by I was almost bowled over; literally. I quickly jumped back eight feet faster than you can say “Asher Yatzar!”

As I regained my composure and dusted off my fallen hat, I wondered who was driving the vehicle.

The woman behind the wheel resembled more of an old fashioned ‘telephone-switchboard-operator’ than a ‘motor-vehicle operator’! She was gesticulating wildly with her left hand while simultaneously struggling to keep her right hand glued to the phone which was being pressed into her ear.

“If her left hand is painting pictures in the air and her right hand is holding the phone… which of her hands is holding the steering wheel?” I wondered to no one in particular.

Perhaps she has invented a new and ‘technologically advanced’ albeit entirely dangerous mode of ‘no-hands’ driving! I quickly jumped into my car and followed the fast-moving four-wheeler as it barreled down the street.

As she turned the corner, I realized to my horror that in the back of her three ton Suburban were five little bobbing heads.

I was getting closer and incredulously I was able to read her bumper sticker: “I care about our ‘at-risk children’!” Finally at the next corner she slowed down in order to allow one of the ‘double seat-belted’ toddlers to alight from the vast vehicle.

I quickly drove in front of her and stopped my car, blocking the path of the heaving behemoth.

With trepidation and fear I hesitantly approached the fearful and terrifying leviathan. As I came within reach of the driver’s side of the gasping goliath, I could hear the powerful engine revving as the massive monster was chomping at the bit to accelerate and continue his romp at the speed of light through the roadways of North Jersey. I reached the driver’s door and the beast’s handler lowered her window. I began to speak in the most composed voice I could muster. “Excuse me ‘Mrs. Suburban,’ it seems to me that you were driving your car while speaking on the phone and there are precious little children in the car. Is it possible that your priorities are out of alignment?” I asked.
Without the slightest hint of hesitance, ‘Mrs. Suburban’ replied confidently: “Rabbi, I know what you are thinking – that I was wasting precious time while driving – however, you have nothing to worry about. I was listening to a Torah lecture on bitachon while I was driving.

“And if you are concerned that I was talking on a ‘smartphone’ I can allay you fears as I had it totally filtered, sterilized and fixed at the local TAG office. In fact, you can see the special kosher sticker which has been affixed to the phone.

“So, rabbi, I appreciate your concern with my spiritual safety; however, as you can see, you have no reason in the world to be concerned. That being said, it is clearly ‘hashgacha pratis’ that Hashem caused you to see me.

“I was actually calling you, rabbi, on the phone when you caught up to me! So, you can ignore my ten minute message, as Hashem put you here obviously for you to answer the question in-person. Here is my question:

“By accident (of course), my cleaning lady spilled a drop of Goyishe milk from her coffee cup into my ‘exclusively-designated yoshon-only Chassidishe-shechita pot.’ As I would never want to endanger the lives of my kinderlach in any way – no matter how remote – I must ask you wise rabbi, should I just throw out the pot or should I kasher my entire kitchen just to be on the ‘safe side’?

“Rabbi? Why aren’t you answering?

“Rabbi, are you alright, you look like you are going to faint?

You don’t have to worry, it has a very reliable ‘heimishe hashgacha.’”

Friends, we all have to worry about our ruchnius; however, if we don’t first make sure that our ‘gashmius’ bodies are intact, then we will have nothing left with what to utilize our ruchnius!

Don’t talk on your cell phone and drive, and don’t text and drive!